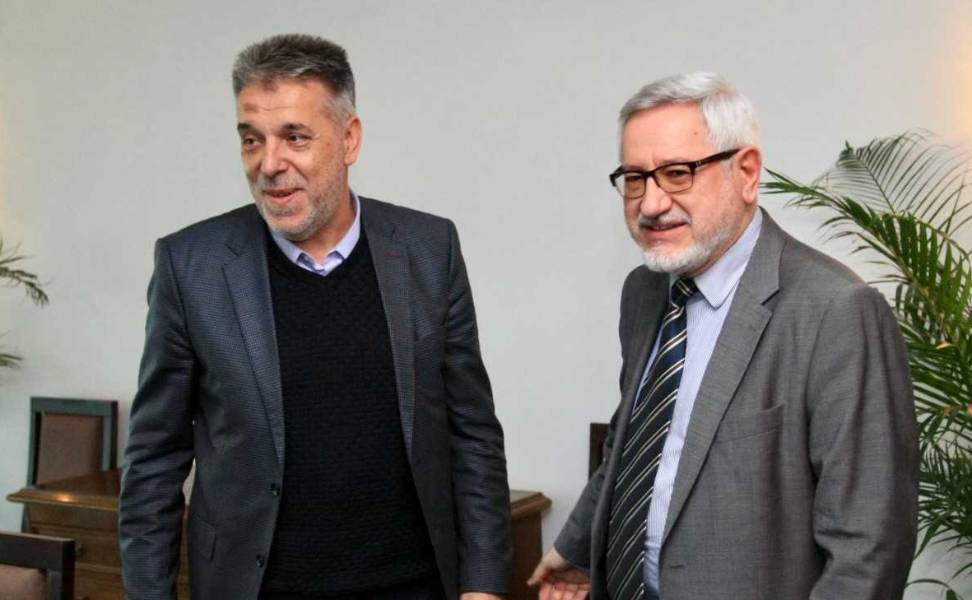 Presented the recommendations for the joint worship

Politicians think and work with deadlines because they want results, but the Joint Historical Commission for Historical and Educational Issues is not obliged to agree on all topics on which Macedonian and Bulgarian historiography have disagreements, the co-president from the Macedonian side emphasized today Dear Gjorgiev, after the presentation of the so far agreed recommendations for history textbooks for the ancient period and for the common veneration of medieval historical figures - King Samuel, the Holy Brothers Cyril and Methodius, Saint Kliment of Ohrid and Saint Naum of Ohrid.

At the following meetings, the commission should consider the period from the end of the 19th and the beginning of the 20th century and make recommendations for textbooks and for the common honoring of revolutionaries and events of that time, such as Gotse Delchev, the Ilinden Uprising, but, according to Gjorgiev, it may or may not happen.

"We did not say that we must come to a common position and a unified opinion. That period will undoubtedly be difficult and painful, the discussions will last and, if we find a solution, we will present it, if we don't - there is no solution. It does not necessarily mean that this commission must come to solutions for Macedonian and Bulgarian historiography at any cost. We are only looking for solutions to the presentation of certain persons in textbooks, we are not discussing how historiography looks at those persons and events. Historiography will continue to work. The commission does not influence researches, the writing of history books, it will only focus on overcoming the misunderstandings in the textbooks in order to relax the relations between the two states and the two peoples," Gjorgiev said yesterday.

Governments may or may not adopt the recommendations

"Those recommendations do not touch on identity issues, they are more to avoid the mythologizing of the ancient period in the educational system of both sides and to avoid today's national perspective of nation states on the period of antiquity. Five recommendations were adopted for those places where our side felt that there should be improvement in their textbooks and vice versa, mainly, these are certain structural-lexical, factual errors, errors about historical and geographical regions, etc. In those segments we noticed the most omissions. These are recommendations that go to the Government, which should adopt them and continue further in the process when writing the future textbooks and when making the units of the curricula. Adoption by the Government is pending, it is not mandatory, it is the institution's decision," said Gjorgiev.

He added that the textbooks are changing those things that can contribute to the disruption of relations between the two countries and that can cause tension and hatred among the young generations, which, he said, is the task of any historical commission working on such a task. with textbooks.
The recommendations, on the other hand, for the common honoring of the personalities from the Middle Ages are identical for both the Macedonian and Bulgarian sides, and these are texts with which the Commission recommends the two governments to commemorate certain anniversaries and jubilees together. Gjorgiev said that the main criteria for the Commission in compiling these recommendations are the presentation of the universal values ​​of those persons and their contribution to the development of Christian culture and tradition in these areas and the development of Slavic literacy.

"We tried to make the texts have a wider, regional aspect. All of them can be part of a joint celebration, not only of Macedonia and Bulgaria, but also of many other countries. From that aspect, the Commission made texts that are acceptable to both sides and, if adopted by the Government, will contribute to the improvement of relations between the two peoples," said Gjorgiev.

The Ministry of Foreign Affairs, according to the bilateral protocol of the Second Intergovernmental Commission, on its website announced the recommendations adopted so far of the Historical Commission, as well as the conclusions of the First Intergovernmental Commission between Macedonia and Bulgaria from June 2019, signed by ex-ministers Nikola Dimitrov and Ekaterina Zaharieva. In those conclusions, it is stated that both sides accept the recommendations for the five medieval figures and should harmonize the dates for the joint celebrations in the shortest possible time. It was also concluded that the historical commission should "resolutely speed up the work on important historical topics, such as Gotse Delchev and the Ilinden Uprising and others, striving to achieve real results by the end of 2019, including for textbooks". This recommendation has not yet been implemented, because the Commission failed to reach a mutually acceptable description and recommendations for this period.

"The recommendations for the Middle Ages were adopted in 2019, and the governments decided to publish them today, according to the Protocol that was signed a month ago. The other recommendations we are working on need to be completed and published," said Gjorgiev.

"Regarding the conclusions of the second bilateral protocol signed by ministers Bujar Osmani and Teodora Genchovska in Sofia in July, Gjorgiev emphasized that there is encouragement in it, but it does not state imperatively when certain issues should be closed. The commission has its own dynamics and way of working and until both sides agree according to academic principles and the latest historical knowledge, they will not come up with recommendations.
- We take into account the encouragement, but we will determine the dynamics", concluded Gjorgiev.

What are the recommendations?

The recommendations, among other things, state: "The missionary work of the holy brothers Cyril and Methodius laid the foundations of the Christian culture and spirituality of the Slavic peoples." The acceptance and spread of literacy and translations of liturgical books enable Slavic peoples to become familiar with Christian teachings in an understandable language. The work of Saints Cyril and Methodius was preserved and developed in the literary centers of Preslav and Ohrid, which were then located on the territory of the medieval Bulgarian state, where their students found conditions for work. It provides an essential basis for the modern states of the Republic of North Macedonia and the Republic of Bulgaria to jointly commemorate the day of Saints Cyril and Methodius..."
Saint Kliment is said to have been accepted into the medieval Bulgarian state after the Great Moravian mission. "Around 886 was sent by Prince Boris-Mihail to the Kutmichevica area, where as an educator and creator he laid the foundations of the Ohrid Literary School. Around 893, by order of the Bulgarian king, Simeon was ordained as the bishop of Veliki. His preaching and worship are of great importance for the spread and establishment of Christian literacy and culture. Through the translations of liturgical literature and hymnographic works he created, as well as thanks to his teaching activity, many students have been prepared. That makes one of the most important figures for the culture of today's Republic of North Macedonia and the Republic of Bulgaria..."

It is stated about King Samuel that he is "the ruler of a large medieval state, which the majority of modern historical science considers to be the Bulgarian Kingdom, with its center in the territory of today's Republic of North Macedonia. It covers a significant part of the countries and population of the Balkan Peninsula. Tsar Samuel and his dramatic fate are a symbol of the common history, which is shared by the two modern states of the Republic of North Macedonia and the Republic of Bulgaria. The joint commission proposes to the two governments, in the spirit of the signed bilateral Agreement, that the commemoration of King Samuel be a sign of shared values ​​and true good neighborliness and friendship."