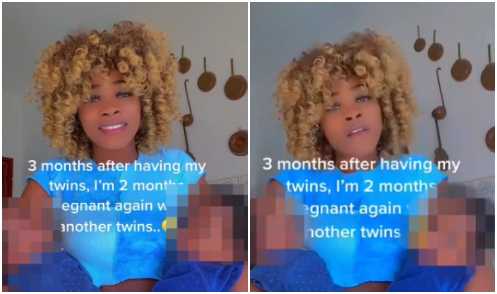 A woman on "TikTok" reported that she is in a very unusual situation after explaining that she became pregnant with twins again, after giving birth to twins. Many congratulated her and wrote that what happened is great, but there are those who say, from their own experience, that it is not easy to have twins, especially two couples, as is the case with this woman.

"Fertility is a blessing," one user wrote in a TikTok video posted by a woman on @ Bae_favvy1. She claims she became pregnant again just one month after giving birth to twins.

"Three months after I got the twins, I am pregnant again in the second month with another pair of twins," the user commented in the post, but did not reveal too many details about her feelings.

Her post garnered over 3,6 million views. Many commented, and here are some of the comments: "It is positive that you will have 4 children from only two pregnancies! "They will grow up fast and you will enjoy a large family." "My jaw dropped. God bless you, "" Wow, that's amazing. I wish I had twins and then no more babies. Congratulations "," Why would anyone do that, you will never sleep again ". "Those who show their congratulations here obviously never wore twins!" "I can not bear the thought of repeating that." The Sun.