"Tangled" love triangle: Julia Fox was in a relationship with Drake before being with Kanye West 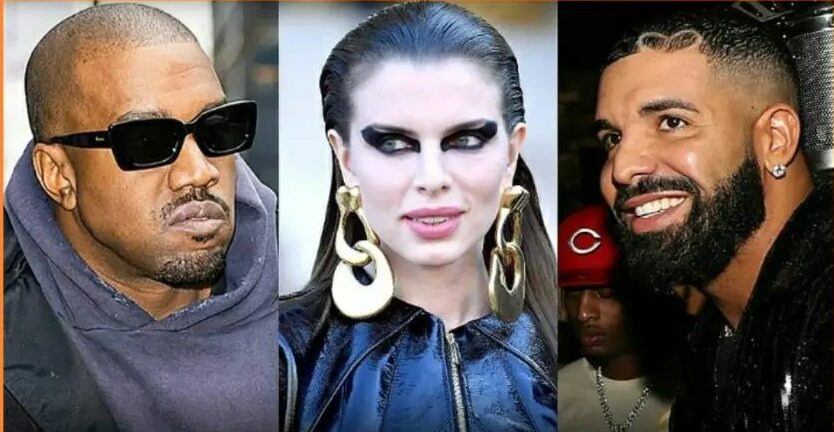 Julia Fox is stuck in the middle of one of the bitterest quarrels in hip-hop.

The actress had a hot and difficult secret romance with Drake a year before she started dating his former enemy Kanye West.

Sources say Fox, 31, told the West about her "Hotline Fling" with rival Drake - who showered her with gifts - including two Birkin bags - and that Ye was not thrilled.

We are told that the 35-year-old rapper first approached Fox via an Instagram message to compliment her on her role in Adam Sandler's 2019 drama "Uncut Gems."

But after Fox's relationship with her longtime partner, Peter Artemiev, broke up later that year, she contacted Drake again on the social media app.

They met in New York shortly afterwards in February 2020, and the Toronto-born performer took Fox and his girlfriend for a drink at the Beauvais Hotel.

Drake then showed up at Bloomingdale's - where Fox had a promotional event - the next day to visit her at work.

"They closed the store so he could visit it," said a source.

The tormented couple continued their tumultuous romance when Fox flew to Los Angeles a few days after Valentine's Day, where Drake gave her two of Birkin's famous bags, which cost between $ 20.000 and $ 500.000.

"Then she went to his hometown of Toronto to be with him," said the insider.

"But they closed the border between Canada and the United States and she had to go home," they added.

She later rekindled her relationship with former pilot Peter Artemiev, with whom she has a 1-year-old son, ending her brief romance with Drake. And after the couple separated again, she apparently started dating Kanye after meeting in Miami on New Year's Eve.

Drake and Kanye had a long quarrel, but it seems that things will be settled by the end of 2021.