Zaev: The Balkans is no longer a powder keg and is not a time bomb, our place in the EU is deserved 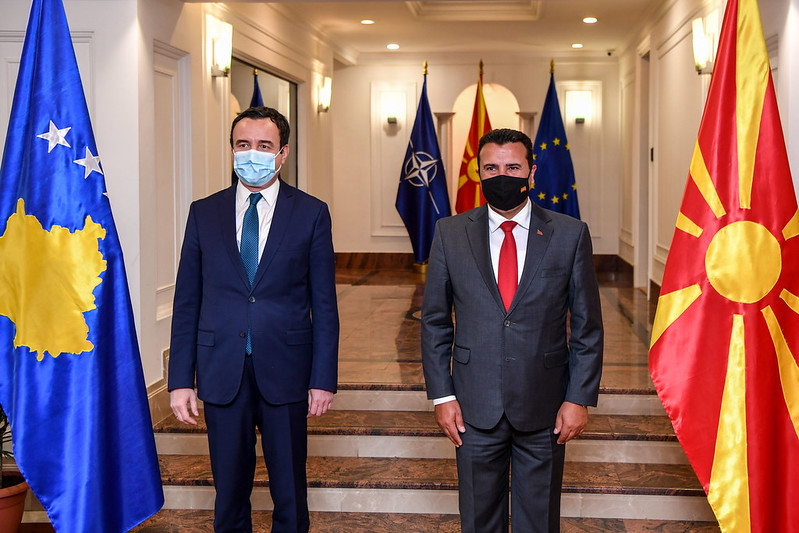 Zoran Zaev and Albin Kurti / Photo: Government of the Republic of Northern Macedonia

"On the issue of the Open Balkans, as prime ministers, we have a different position, but that is not an obstacle for us to cooperate well because it is our duty to serve our citizens, the economy, the chambers, the institutions and that is exactly what we are doing," he said. Zoran Zaev at today's press conference with the Prime Minister of Kosovo, Albin Kurti.

- For me today is a historic day, at this first intergovernmental conference on 30 years of independence of R. Northern Macedonia and 13 years of independence of Kosovo. I will just say that Kosovo is a sovereign and independent state, it builds its views and we respect those views. As a person, I will say that I am known for reaching agreements, as evidenced by the agreement with Bulgaria and the Prespa Agreement, says Zaev.

Prime Minister Zaev believes that the Balkans should have a dialogue, talks and reach agreements.

- As Prime Minister Kurti said, in that way we will be more Europeanized, we will improve regional cooperation and we will strengthen our path to the EU. Throughout the Western Balkans, all 6 countries have no alternative but to join the EU. Any bilateral, multilateral agreement here in the region is absolutely for the sake of a faster, more efficient future in the EU of all our countries, he pointed out.

Our country has shown courageous steps to achieve that goal and that is full membership in the EU. We have achieved the second strategic goal, NATO. In such circumstances, we think that if the region cooperates more, Western Europe and northern Europe and the rest of Europe will respect it even more, the Prime Minister said.

- The Balkans are no longer a powder keg, the Balkans are not a time bomb. The Balkans is the Balkans of the 21st century, we today and bilaterally confirmed it with R. Kosovo, all our ministers, we as prime ministers. I am convinced that in the future dialogue, diplomacy, good thought, friendship, a helping hand are the future of the European part of the Balkans. Our place deserves to be there, as EU members, concluded Zaev.

International experts will not annul the verdicts, but will make their own reports, says Zaev

Gashi: We have never said bad words about this government

Gabriel Escobar is coming to Skopje, he will have a meeting with Pendarovski and other officials

Skender Rexhepi resigns as coordinator of the Alliance and Alternative, he is in the running for a new vice president of the Assembly

New details of the bus accident: A child got off the bus, but burned in an attempt to save his relatives

Stoilkovski: Zaev is ready to stay in power at any cost

Dimitrov: The Macedonian story is a hope for the European project in the Balkans

Zaev: Now with Filipce we will have more time to ride motorcycles