Joint liturgy of MOC-OA and SOC in the cathedral "St. Kliment Ohridski ”in Skopje 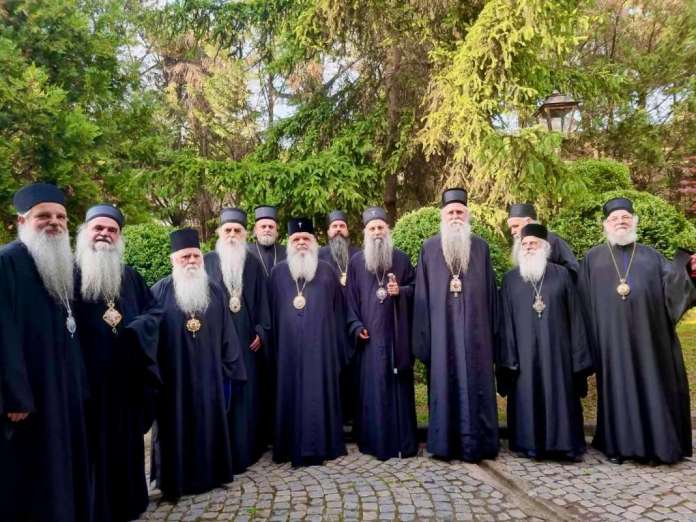 On the Day of the all-Slavic educators Saints Cyril and Methodius, today in the cathedral "Saint Clement of Ohrid ”in Skopje, will be held the liturgy, with which they will officiate the heads of MOC-OA and SOC, the Archbishop of Ohrid and Macedonia Stephen and the Serbian patriarch Porphyry. The liturgy, which will begin at 9 a.m., will be open to the faithful.

The joint communion of the two leaders comes after overcoming the 55-year-old schism between the SOC and the MOC-OA and the resumption of the canonical and Eucharistic communion, after the Ecumenical Patriarchate decided to recognize the MOC-OA as a canonical church.

The joint liturgy will be officiated by the heads Stefan and Porphyry, and will be attended by all bishops of MOC-OA and bishops of SOC. At the end of the Divine Liturgy the two heads will have addresses.

Earlier, on May 19, The two chiefs served a joint hierarchical liturgy of reconciliation at the Cathedral of St. Sava in Belgrade, at the invitation of Serbian Patriarch Porphyry. This was followed by an invitation from the Archbishop of Ohrid and Macedonia gg. Stefan, for a joint liturgy in the church "St. Kliment Ohridski ”in Skopje on the Day of the All-Slavic educators, the holy co-apostles Cyril and Methodius.

The joint liturgy is part of the canonical visit of a delegation of the Serbian Orthodox Church, led by Patriarch Porphyry, who arrived in Skopje yesterday. The delegation consists of twenty people, including eight bishops of the SOC.

This visit of the head of the SOC Porphyry was preceded by the joint hierarchical liturgy of reconciliation that took place on the 19th of this month in the cathedral "St. Sava" in Belgrade, officiated by Patriarch Porphyry and Archbishop of Ohrid and Macedonia. The liturgy confirmed the overcoming of the 55-year-old schism between the SOC and the MOC-OA and the resumption of the canonical and Eucharistic communion.

Today's joint liturgy follows the end of the Assembly of the Serbian Orthodox Church in Belgrade yesterday, which on May 16 confirmed the status of the widest possible autonomy for the MOC-OA, ie full internal independence, granted in 1959.

Yesterday's announcement published on the official website of the SOC, in addition to several decisions made at this Assembly, mentions the joint liturgy in the cathedral "St. Sava" in Belgrade, which established the Eucharistic communion and canonical unity between the SOC and MOC-OA .

- In the dialogue on the future and eventually final canonical status of the MOC, the Serbian Orthodox Church will be guided only by canonical and church-pastoral principles, criteria and norms, not caring about "realpolitik", "geopolitical", "church-political" initiatives and not falling under the influence or pressure of anyone. The Assembly of the SOC does not intend after the resolution of the status to condition the new sister Church with restrictive clauses regarding the scope of its jurisdiction in the home country and the diaspora, with a recommendation that the same issue for its official name be resolved in direct fraternal dialogue with Greek and other Orthodox churches, according to a statement from the Assembly of the SOC.

The dispute between the two sister churches began on July 17, 1967, when the Third Church-People's Assembly convened by the Holy Synod of the MOC at a solemn session in the Ohrid church "St. Clement ”declared the Macedonian Orthodox Church autocephalous. After this, the Holy Synod of Bishops of the SOC declared the MOC a schismatic organization and terminated the liturgical and canonical unity.

After 55 years of schism, on May 9, the Ecumenical Patriarchate broke the isolation of the MOC-OA and recognized it as a canonical church, after which the relations between the SOC and the MOC-OA began to warm up. With this decision, the Ecumenical Patriarchate gave the Macedonian clergy the opportunity to have joint services with other Orthodox churches. That decision does not mean a tomos of autocephaly that officially regulates the international name and status of the church, but is "an expression of the paternal love and care of the Ecumenical Patriarchate" and an announcement that the MOC is no longer in schism with the entire Orthodox world and that Macedonian priests can to serve with priests from other Orthodox churches.

Ecumenical Patriarch Bartholomew welcomed the reconciliation liturgy held by the SOC and MOC-OA in the Cathedral "St. Sava". At a meeting with professors and students from the Theological Seminary "St. Petar Cetinjski ”, who are visiting the Ecumenical Patriarchate, Patriarch Bartholomew said that the meeting of Serbian Patriarch Porphyry and Archbishop Stefan of Ohrid can rightly be assessed as an act of reconciliation and cooperation, which occurred, as he stated, only a few days after his historic decision regarding the church in Northern Macedonia.

- Through you, I greet the holy church of Serbia and cordially embrace its leader, the most beloved and blessed patriarch Mr. Porphyry. "Our two churches are associated with sacred and indestructible bonds, of common faith and common struggles, and bonds of a mother's love for her beloved daughter, which, according to the Apostle Paul," never fail, "said the Ecumenical Patriarch.

He also stressed the joy of, as he pointed out, the Mother Church in Constantinople after the "historic decision" of its Synod to return the Ohrid Archbishopric to the Eucharistic community, which paved the way for reconciliation with the SOC and the establishment of peace and order in the Balkans.

Otherwise, due to today's second joint liturgy of the heads of the two churches, there will be a special traffic regime in Skopje. The boulevard "Partizanski Odredi" from the intersection with the street "Aminta Treti" to the intersection with the boulevard "VMRO", as well as the street "St. Kliment Ohridski ”from the crossroads with“ Ilinden ”boulevard to the crossroads with“ Dimitrie Cupovski ”street.