The negotiation teams are in stock, this weekend the meeting between Kovacevski and Taravari
PHOTO: The employees of the "Lazar Pop Trajkov" palace turned the space between the buildings into a parking lot: Residents report and complain in vain
Protest of high school students from Islamic school "Isa Beg", demanding recognition of diplomas
VIDEO | Andonovic: The contours of the new phase of warfare in Ukraine are emerging
Until constitutional changes through discussion with everyone 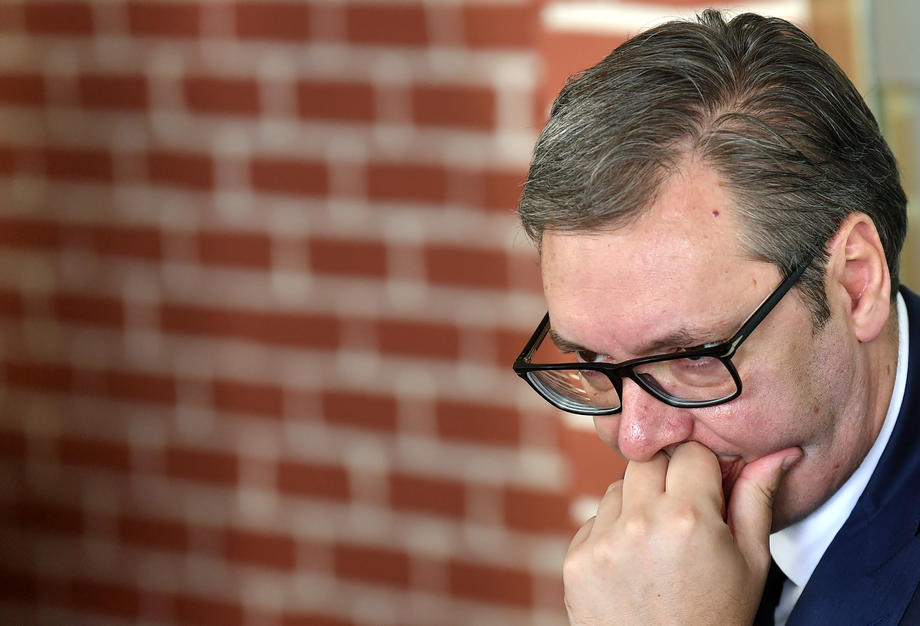 The Serbian president Aleksandar Vuќi. today he stated that if Kurti says that for him the issue of the status of Kosovo is over, it is also over for me, but is he basing it on important documents.

"If Kurti says the status issue is over for him. Good. Because for me the issue of the status of Kosovo is over. I base that completion on one important act – the Charter of the United Nations and Resolution 1244, Vucic said in an address to journalists during his visit to Norway.

As reported by the Serbian media, the Prime Minister of Kosovo Albin Kurti stated that for him the question of the status of Kosovo is over with the verdict of the International Court of Justice.

According to Vucic, Kurti appeals to everything that suits him, not what doesn't suit him, and there is only one answer to that, and that is not to return to the past.

According to him, Kurti relies on the power of the big and powerful countries from the West and believes that they will be the ones who will force Serbia to accept something, but also that in the past Serbia has made many bad moves.

He assessed that the situation in the north and throughout Kosovo, as far as the Serbian people are concerned, is literally boiling.

"People are fed up, everywhere, I won't even talk about Metochia. They harass, torture people. When you put everything together, you realize that it is a systematic persecution, people have a soul, they say enough is enough. Kurti refers to everything that suits him, and in no case adheres to what was signed in Brussels. "Quinta will always support the Albanians of Kosovo and Metohija, it is their child, we have no expectations from our side," said Vucic.

He pointed out that the Albanians think that with the special police they can solve the problems in the north of Kosovo, but they do not understand that they are only encouraging the Serbian people to be absolutely more and more determined against them, says Vucic

"It seems they didn't listen carefully, maybe that's a good thing, maybe I said too much." As for us, it is our duty to be with our people and see how we can help them," said Vucic.

Vucic said that today he "spoke with the king of Norway and the prime minister about important issues".

"You know Norway diagnoses the situation better and more accurately than anyone on the ground and is someone who keeps the peace. Accordingly, we talked about Kosovo, about the dialogue process itself, said Vucic.

By the way, today Serbian President Aleksandar Vucic started his first working visit to Norway as the president of Serbia, after a conference was held in Belgrade two weeks ago together with Norway and the countries of the Western Balkans on the possibilities of investing in renewable energy sources.

Vucic previously announced that Serbia should implement a reform in the energy sector and diversify the sources of gas and oil supply, as well as increase investments in renewable energy sources and that Norway, which is one of the leaders in that area and the green transition , will help her in that.

Vucic is seeking advice on energy reforms in Norway

A meeting between Prime Minister Dimitar Kovacevski and the president of the Alliance for Albanians, Arben Taravari, for the entry of the opposition party into the Government is expected this weekend, after AA was supposed to choose the team for negotiations last night, the Alliance briefed "Free Press". The agreement on a new government partnership, according to information, is expected to be 90 percent harmonized already on...

The negotiation teams are in stock, this weekend the meeting between Kovacevski and Taravari Read More »

Until constitutional changes through discussion with everyone

What medicines are needed in case of a nuclear attack? WHO published a publication

The leaders of AA are deciding on entering the government, Taravari says - there is still no offer from Kovacevski

VIDEO: Fierce fighting in Ugledar, Russian forces are trying to capture the city

At the Australian Open, Djokovic broke the record of the legendary Andre Agassi

Abazovic hopes that Montenegro will get a new president