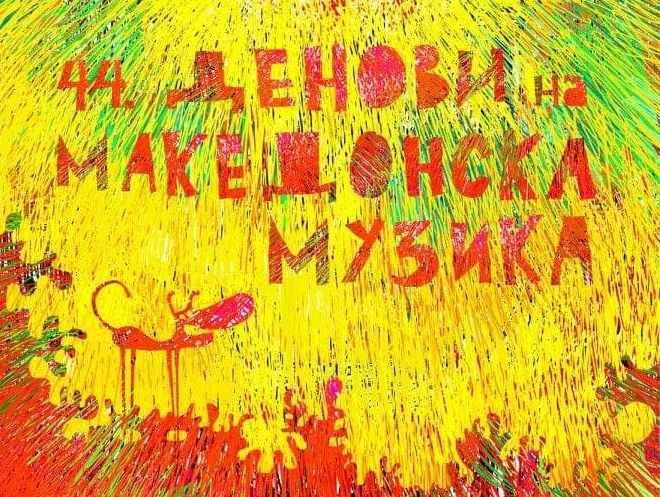 The Union of Composers of Macedonia (SOKOM) simultaneously started the realization of its two oldest and most important events - the festival 44. Days of Macedonian music and music-scientific event 45. Struga music autumn.

The program of the 44th Days of Macedonian Music was opened with the concert "Vrutok" and a performance by the young pianist Ines Nedelkovska from the class of Professor Nina Kostova Janevska. The festival will take place from September 17 to October 15 and will cover 13 events.

- With great effort, dedication and love we approached the organization of the two events of the Union of Composers of Macedonia - the oldest, most significant and unique of its kind: the festival 44. Days of Macedonian music and music-scientific event 45. Struga music autumn.

In the most difficult and unpredictable 2020, DMM shone in its rebirth. We managed to make a festival on a world level, in three seasons, with a huge number of large and small ensembles, orchestras, genre diverse, with big names from the world and Macedonian scene. Despite all the circumstances, which did not go in our favor, we restored the shine and gave impetus for further development and trust. Such a 43rd edition of the festival won a new audience, which had, rightly, high expectations for what is to come.

Unfortunately, the line ministry did not share this view. This year, the festival will be held due to the good will of top Macedonian and world artists, who for a symbolic fee, perform to support their colleagues from SOKOM and DMM, as well as due to decades of fruitful cooperation with major national, educational and music institutions. which met our needs this year as well, as well as the help from European partners - emphasizes the composer Darija Andovska, artistic director of DMM 2021.

The program of DMM 2021 includes the concerts "Pulse Plus" with Antonie Veskovski (percussion instruments) and Elena Atanasovska (piano), "Virtuosos" with Vladimir Kostov (violin) and Marija Vrskova (piano), "Albatros" with the ensemble " (Italy), "Laureates" with Danica Stojanova (piano), Zlatica Miteva (flute) and Natasa Trbojevic (piano), "Dodola" with Gonca Bogoromova (soprano) and Marija Vrskova (piano), "Chance-Dance music" - for for the first time in Macedonia with music created through dance movements and choreography by Ivana Kocevska, together with Valentino Apostolovski and Jeff Castello-Branko (Belgium), concert of the orchestra "L'art del mondo" from Germany, "Jubilees" with students from the Faculty of Music Art in Skopje, "Voices" with a gala concert with the orchestra and soloists of the National Opera and Ballet, "Meet the Composer" with the composer Jana Andreevska and Nina Stefanova (moderator), "Damari" with the mixed choir "Pro Ars" and Saso Tatarcevski (conductor), as well as a concert by "ConTempora" (wind queen tet).

Regarding the music-scientific manifestation 45. Struga Music Autumn, the professional public will be able to follow 27 thematic references to the conditions and perspectives in the Macedonian music culture. Apart from the care for the current and current work, special attention is paid to the celebration of the anniversaries of the birth of the composers Blagoja Ivanovski (100 years), Toma Prosev and Dragan Gjakonovski-Shpato (90 years) and Stojan Stojkov (80 years), informed Valentina Velkovska- Trajanovska, President of SOKOM.