A timeline of the relationship between Johnny Depp and Kate Moss 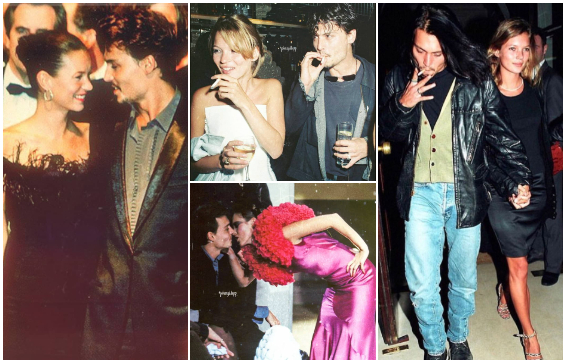 In the 90s Johnny Depp and Kate Moss they had fun for several years and during their love affair they were among the most current couples, writes Us Weekly. The relationship that ended more than a decade ago and certainly before Johnny got involved in an ongoing legal battle with his ex-wife Amber Heard.

Amber, who was married to Depp from 2015 to 2017, claimed that the actor physically abused her during their marriage. Depp, who denies the allegations, is suing her for defamation, arguing that the Washington Post author's 2018 text in which Hurd identifies himself as a victim of domestic violence has damaged his career and reputation.

In 2020, Moss' name appeared during Hurd's testimony in Depp's defamation lawsuit against The Sun. At the time, the actress was talking about an alleged altercation between Johnny and her sister Whitney Henriquez, in which Amber attacked Depp, recalling rumors that he had once pushed Kate Moss up the stairs.

Moss is due to testify in the ongoing defamation lawsuit against Hurd on Wednesday, May 25th.

Scroll through the time frame:

Kate Moss and Johnny Depp started having fun after they allegedly met at the Tabak Cafe in New York. That same year, Depp was arrested for destroying a room at the Mark Hotel in New York while Moss was asleep.

Well-known columnist George Wayne claimed to have met them in a New York cafe in 1994.

"Johnny was behind dinner, and Kate came in with Naomi Campbell and George Wayne grabbed her and introduced them." the writer wrote via Instagram in 2019. "I did not know that they would then become the most current couple in the coming seasons, destroying hotel rooms around the world during their still unforgettable community!"

The same year they met, Depp was arrested for destroying a room at the Mark Hotel in New York. Police reportedly found Moss and the actor sitting in the middle of the rubble when they arrived at the scene. Depp confessed to the 2020 incident while testifying in his defamation lawsuit against The Sun.

"I actually told the security guard when he came to my room that I was more than willing to pay for everything I broke," Depp said at the time.

The couple is believed to have broken off the relationship.

Moss and Depp were again spotted holding hands at the Cannes Film Festival, but they broke up forever the same year. Johnny spoke to "Hello!" After the breakup, taking responsibility.

"I have never been so emotional about a woman. I was so stupid because a lot of things went in our favor for our relationship. "I am the one who has to take responsibility for what happened, it was difficult for me to continue, I let my work bother me and I did not pay the attention I was supposed to pay," he said.

"The whole thing was crazy because I never had to worry so much about what people had to say about my work. Sure, I have to take care of my movies, but when I get home, I have to try to leave those things behind. I could not do that and I was terrible for coexistence. "Believe me, sometimes I'm a total fool," he continued.

Although relatively short-lived, the relationship has had a lasting effect on both of them. In a 2012 interview with Vanity Fair, the British model revealed that she endured "years and years of crying" after breaking up with the actor.

"There is no one who could really take care of me. Johnny has been doing this for some time. I believed what he told me. "How would I ask, 'What should I do?' He would tell me," she said. "I really lost that gauge to have someone I could trust. "It was a nightmare."

Moss' name appeared during Hurd's testimony in Depp's defamation lawsuit against The Sun. At the time, the actress was talking about an alleged quarrel between the actor and her sister Whitney Henriquez.

"Johnny waved. "I look at my younger sister with her back to the stairs and Johnny is waving at her and I'm not even waiting. '

"I remembered the information I heard that he had pushed an ex-girlfriend - I believe it was Kate Moss - up the stairs. "I heard this rumor from two people and it was fresh in my mind."

Johnny Depp's lawyer, Ben Chu, was seen smiling happily after the trial because it allowed Moss to testify on Depp's behalf.

Moss is due to testify today, May 25.