A train derailed in Montana, killing at least three people 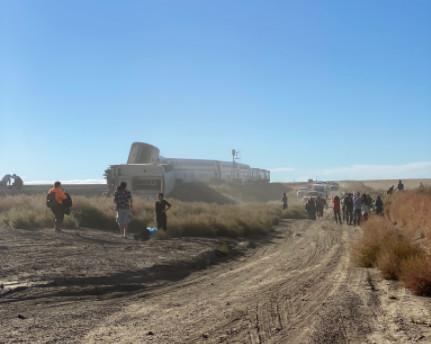 At least three people were killed and several passengers were injured ce injured when a passenger train of the American railway company "Amtrak" derailed yesterday in the northern central state of Montana, a representative of the local sheriff announced today, NBC reports.

The official said there were several injuries, but that the final number was not yet known.

The cause of the accident is still unknown.

The Empire Builder 7 we were traveling west on to Seattle derailed near Joplin, MT about an hour ago. pic.twitter.com/k4TjbRog3D

The train to Seattle had about 146 passengers and 16 crew members, the Amtrak company said.

#WHO #Montana #the accident
Сподели
Video of the day

WHO chief: The pandemic will end when people decide

"No one, their parents are dead": Eight children starve to death in Kabul

Big tragedy in Texas: A car went off the road, two children died, 8 people were injured

Pope Francis said: Do not return migrants to their countries, there is hell