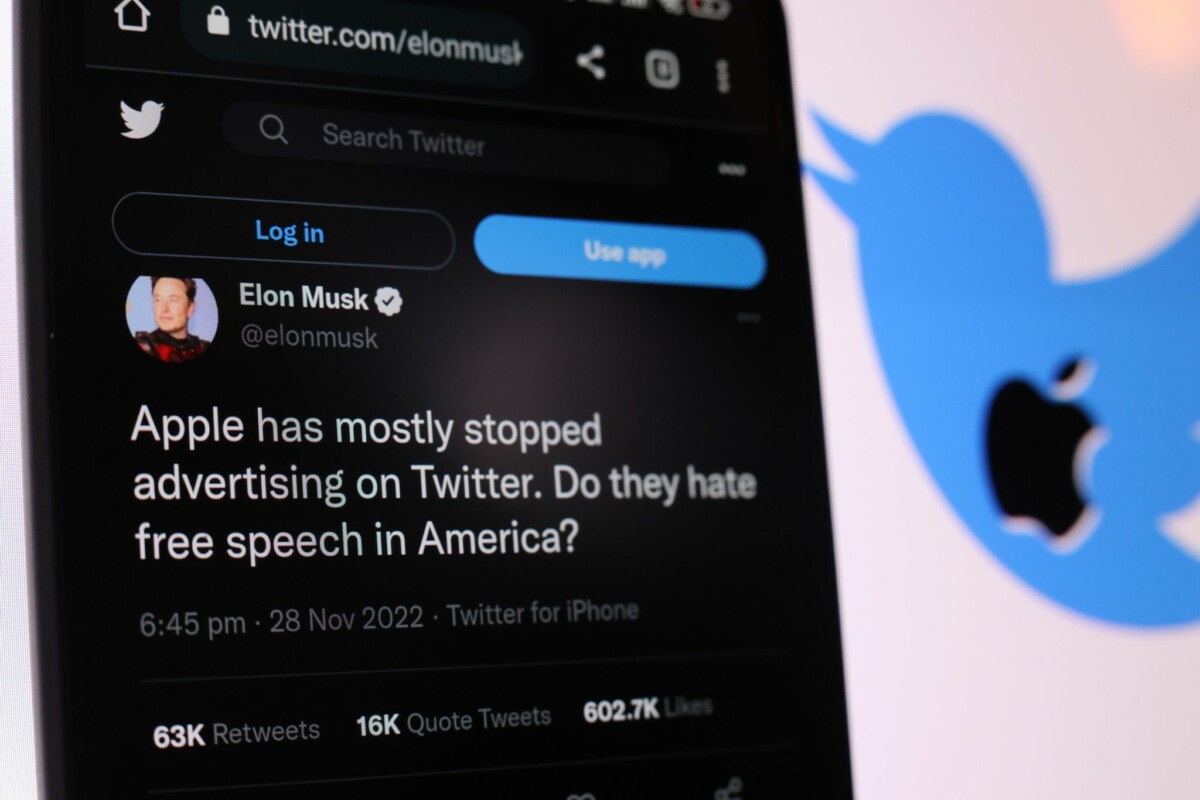 The billionaire threatened to use "heavy artillery" - he will create his own smartphone to compete with "iPhones", but he will also have to make defensive plans, because "Apple" can activate its own artillery and retaliate with its own completely autonomous electric car – the Titan project that has been quietly developing for years

Elon Musk has openly declared war on the tech giant "Apple", accusing it of trying to silence his new pet - the social network "Twitter".

The world's richest man has raised the hatchet in signature style, posting a photo montage of himself as a car swerving from the "pay 30 percent" freeway onto the "go to war" by-pass. Musk quickly deleted his tweet, but the message has already been sent.

The billionaire accuses the leading mobile phone maker iPhone of trying to monopolize the market and deprive users of their freedom of expression. That's his interpretation of the restrictions implemented by Apple after Musk took full command of Twitter and imposed a policy of returning to the nest of "birds" blocked for spreading hate and fake news.

- "Apple" almost stopped advertising on Twitter. Do they hate free speech in America - asked Musk on Monday, in one of the first bursts of the war of the giants. Soon after, "the main bird" wrote that "Apple" without explanation threatened to completely remove Twitter from the application store.

Episodes from the rise of the billionaire indicate that these are not his first attacks on Apple, but the first in which he uses Twitter, for which he paid $44 billion. Back in 2015, Musk joked that Apple was hiring the workers he had fired from Tesla.

– They hire people that we fired. We always mockingly refer to Apple as Tesla's graveyard. If you can't make it at Tesla, go work at Apple. I'm not kidding - Musk told the German newspaper "Handelsblatt".

He attacked Apple, considering it a provocation the announcements that the mobile phone manufacturing giant is considering the possibility of developing its own electric car.

- Have you looked at the new Apple Watch? No, it's good that Apple is investing in this direction. But cars are very complex compared to smartphones and smartwatches. You can't just go to a supplier like Foxconn and say, "Make me a car," Musk said.

In 2016, Apple CEO Tim Cook reportedly seriously considered buying Tesla, which Musk took on as a major investor in 2004. Cook then stated that he would have nothing against Musk remaining CEO of Tesla, but all plans were rejected after Musk told him in a phone conversation that he wanted to be the director of Apple as well.

- Cook answered him "Fuck it!" and cut his line - notes Tim Higgins in the book: "Power game: Tesla, Elon Musk and the bet of the century".

Both Musk and Cook later denied reports that they had spoken directly, not just about such a possibility but in general.

– At one time I asked to meet with Cook to discuss Apple buying Tesla. There were no proposed terms for the purchase. He refused to meet. "Tesla" was then worth 6 percent of the amount it is valued at today - noted Musk on Twitter after the publication of Higgins' book in 2021.

Attacks on Apple continued in 2018, when Musk noted that Apple products were stagnating.

– There are not many products that can really make you happy when you buy them. I still think, of course, that Apple makes great phones. I still use an iPhone and everything.

But Apple really promoted products that blew your mind, you know? And they still make great products, but not like this - said Musk in an interview in 2018.

He then pointed out that "Tesla" is learning from the mistakes of "Apple" in trying to attract the interest of buyers.

– I don't think people are running to the stores for the iPhone 11. But with "Tesla", we really want to make products that people will love, that will make their heart skip a beat - said Musk.

– Technology is not automatically upgraded. People have gotten used to phones getting better every year. I use an iPhone, but I think that some of the recent software updates are not good - said Musk at the conference "Satellite 2020", while complaining that "the new software destroyed his electronic mailbox".

Apple began to fight back after Musk bought Twitter, but not out of personal impatience, but in response to a policy change imposed by the new autocratic owner and the announcement that all users who were blocked for not adhering to basic criteria would be returned to the platform. . Phil Schiller, director of Apple's digital app store, deleted his Twitter account after Musk allowed former President Donald Trump to return to the platform. Schiller's departure is significant because it has an impact on hundreds of thousands of Twitter followers, as well as among many executives in California's Silicon Valley.

On Monday, Musk delivered the final blow before declaring war.

- Did you know that Apple has a secret tax of 30 percent on everything you buy from its app store - Musk asked. Apple charges software makers between 15 and 30 percent of the cost of apps to distribute to the millions of iPhone users.

He himself, on the other hand, announced that the newly purchased platform "Twitter" will charge users $8 per month to have their profile verified with a blue badge.

A much more serious problem for Twitter is Apple's decision to stop advertising on the social platform. In the first quarter of this year, Apple advertised more on Twitter than anyone else, bringing the platform 4 percent of total revenue. Until the change of ownership of "Twitter", the two giants worked closely together and thrived in symbiosis - "Apple" advertised its products on the platform, and in 2011 even integrated tweets into the then version of the operating system.

Declaring war, Musk threatened to use "heavy artillery" - to create his own smartphone to compete with "iPhones".

- I hope it will not come to that, but yes, if there is no other choice, I will make an alternative phone - said Musk.

But he will also have to make defensive plans, as Apple could fire up its own artillery and fight back with its own fully autonomous electric car – the Project Titan that it has been quietly developing for years.