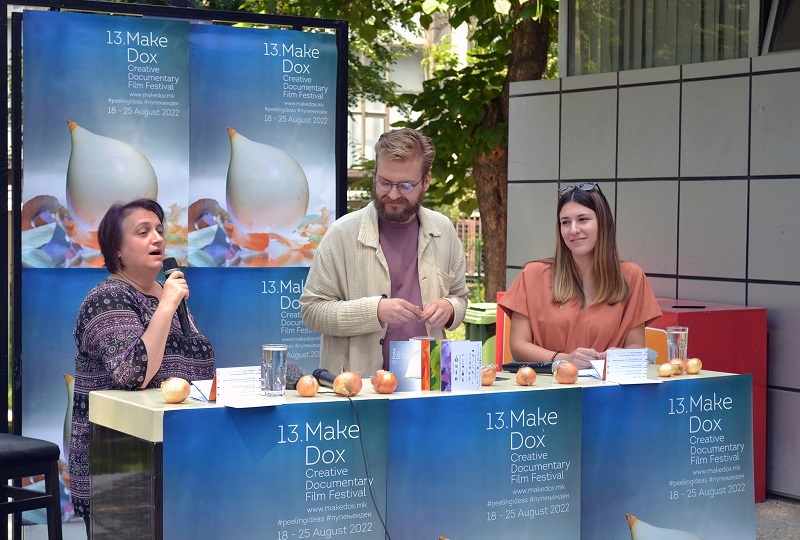 The festival of creative documentary film "MakeDox" in its 13th edition will be held from August 18 to 25 in Skopje. The festival program will be presented in four locations, namely in Kurshumli-an, the plateau of the Museum of Macedonia in front of Kurshumli-an, MKC and "Europe House Skopje". The fourth edition of the MakeCoProDox forum will be held at MCC on August 22 and 23.

With the motto "Peeling ideas", the focus of the 13th "MakeDox" is the development of ideas, and the press conference for the festival program was held today (August 10) on the plateau in front of the MKC in Skopje.

- After two stormy years for the whole world, it's time to give ourselves the strength to realize our ideas again. But this time from a new perspective, let's peel back the old shells and create anew on the new white layers. We believe that the part of the documentary film development process is very significant, especially for the region where we pay very little attention to this process from the creation of the film. That's why this year we made the development of ideas the focus of the festival. We are happy that after two years we will have a festival without restrictions and with a large number of foreign guests - said Darko Nabakov, executive director of the 13th edition of the "MakeDox" festival.

This year, about 70 guests from abroad will arrive at the festival. All films will be shown on a cinema screen. The exception will be the activities related to the MakeCoProDox forum, which will be partially held online.

The film program of the 13th "MakeDox" contains 71 documentaries in five competition categories – Main Program, New Authors, Short Documentary Films and Student Program, while all films are part of the competition for the Ethical Ideas Award. Five prizes will be awarded at the festival, and 15 international professionals from the documentary world are members of the prize committees. Out of competition, but important festival programs are Country in Focus – this year it is the Czech Republic and the Program for Children and Youth.

The festival will open on August 18, in Kurshumli-an, with the documentary film "All That Breathes" (All That Breathes) by the director Shaunak Sen (Shaunak Sen), a film which is an Indian-British co-production, and before it will be shown the Belgian short documentary "Tomorrow Is A Water Palace" by director Juanita Onzaga. 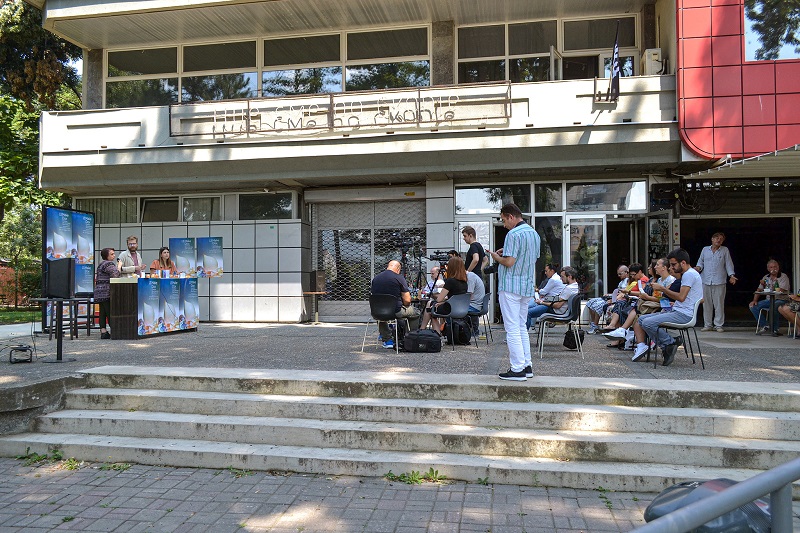 - We are happy that this year films from all five continents of planet Earth arrived at the address of "MakeDocs". We watched films for months and refined the program to get its most authentic form and content that would reflect the creative strength of MakeDox as a festival of creative documentary. I think we succeeded in that, and I hope the audience will be satisfied with our choice.

We will open the festival with the film "Everything that breathes" by the director Shawnak Sen, and before it we will show the Belgian short documentary "The Future is a Water Palace" by the director Juanita Onzaga. The second evening is already traditionally reserved for the opening of the Country in Focus program, this year dedicated to the Czech Republic, and we are happy to have the honor of opening it with the film "Rene - The Prisoner of Freedom" by our guest of honor. Helena Treshtikova, the mother of the time-lapse documentary, who will be present at the screening, and the next day will hold a masterclass on how she develops her ideas and how she brings them to a complete film work.

It's time to peel off the old hardened thoughts and ideas, and I believe that "MakeDox" with its this year's program will help with that and make room for new... better, brighter ones! - emphasized Petrula Veljanovska, part of the programming sector of "MakeDocs".

In the industrial segment of the festival, a masterclass is scheduled with Helena Tsheshtikova, guest of honor at "MakeDox" 2022, who will speak on the topic "Conversation about ideas in documentary film". "Czech director and documentarian Helena Tšestikova is more than a director and documentarian. It can be said that it is a kind of phenomenon, one of those that push the boundaries of what we know about documentary film," said Mikhail Zheleznikov. The conversation with Helena Tsheshtikova will be conducted by Tue Stan Miller.

Also, Tue Sten Müller, a documentary consultant and critic from Denmark, will hold an idea development workshop from August 20-22. Participants of the workshop are directors and producers with short or long creative documentary projects in development, produced or co-produced in the Balkans.

A central place in the industrial segment is occupied by the fourth edition of the MakeCoProDox forum, which will be held from August 22 to 24.

- I am especially glad that after two online editions of the MakeCoProDox forum in pandemic conditions, this year we will have the fourth edition with the largest number of participants present live in Skopje, and a smaller part of them online. This year, for the part - Balkan Film Network, which is moderated by Helle Hansen, representatives from the Slovenian Film Center, the Croatian Audiovisual Center, the Kosovo Center for Cinematography, the Albanian Center for Cinematography, the Bulgarian National Film Center will be present in Skopje, while the Serbian, Montenegrin and Greek center will join us online. On August 22, the first day of the forum, they will present the funding schemes to participants and film professionals. Then we will have a presentation by Ivana Mirchevska from MEDIA desk MK. The day will end with a presentation of the six projects that were part of the development workshop with Tue Stan Miller.

For the second part of the forum, i.e. project pitches, this year we have an excellent and diverse selection of 11 projects that are produced or filmed in the Balkans (Albania, Kosovo, Greece, Serbia, Croatia, Slovenia, Macedonia, Turkey...). They will present their projects on August 23 and have one-on-one meetings with decision makers. The MakeCoProDox forum was realized in cooperation with the RSM Film Agency, MEDIA Desk MK, Greek Film Center, City of Skopje, "Vardar Film" and MKC - explained Sara Ferro, coordinator of the MakeCoProDox forum.

Among the important segments of the festival are "Conversations under the fig tree", which will be held every day from August 19 to 25, at 18 p.m., in Kurshumli-an. On August 21, a photo exhibition of Dorijan Milovanović will be opened. During the festival, the second part of the one-year workshop "Dokunikulci" will be held, in which 10 young people from all over the country will participate, as well as several concerts and DJ sets. 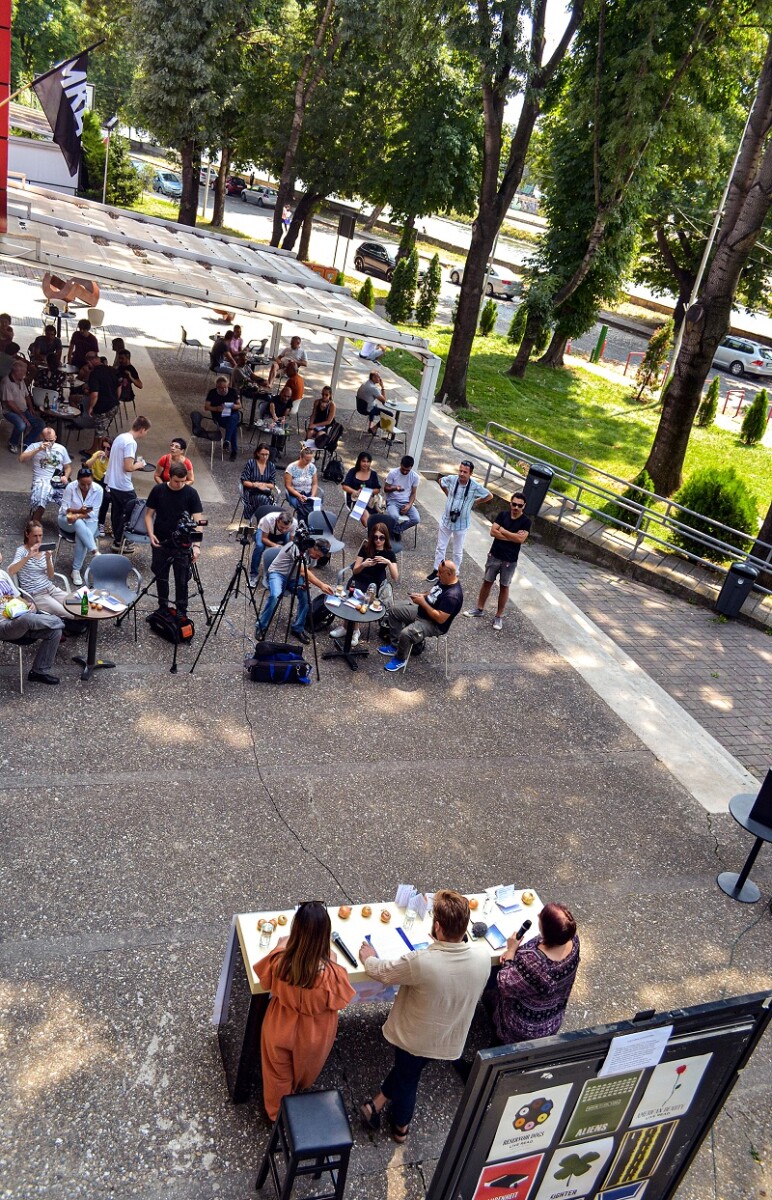 With a musical performance, Pian Slavej promoted the collection of poems "Polygraph"

"Setstat" in an expanded lineup will perform at "Kraj Vardarot Jazz"

"Cultural Press" number 147 was published in the newspaper "Free Press"