In honor of Mother Teresa, a new tree will be planted in place of the fallen tree 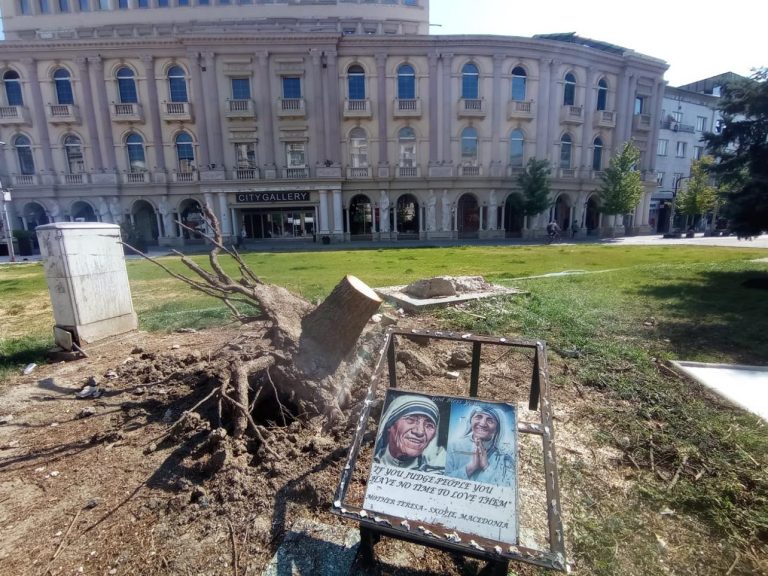 In place of the fallen tree, one of the three planted by Mother Teresa, which towered next to her memorial plaque, will be planted a new one, of the same species. This was announced by the director of PE "Parks and greenery" Angele Sotirovski, after the company's teams yesterday cut down a silver spruce tree that fell during the storm that hit Skopje this past weekend.

The tree was uprooted with visible damage to the main root system as well as damage to the canopy. Despite all the damage, it was impossible to restore the tree to its original state and preserve it. The tree has therefore been removed from the site. We regret what happened and as soon as the weather conditions permit, we will plant a similar one in the place of the fallen tree in memory and respect of the life and work of Mother Teresa - says Sotirovski.

He emphasized that the weather conditions are most favorable for planting in the period from October until the beginning of November.

Earlier, after the tree was removed from the green plateau in front of the GTC, where it fell under the gust of wind and rain, the response from Gonca Boyadziu – Mother Teresa Heritage Department. They appealed for this tree to be returned to the place where it was, but as they say, instead of remediating the situation and returning the tree to its original position, it was cut into several pieces, loaded into a truck and taken to an unknown direction, so they requested responsibility for what has been done.

The company that carried out these actions committed a barbaric act against an object that belongs to the heritage of Mother Teresa, because it is a fir tree planted by her hand in 1980. That's why IDKNA - the Department of the Heritage of Gonja Bojajiu - Mother Teresa urgently asks the municipal and central authorities to start a procedure to take responsibility for the perpetrators of this heinous act - it says in the IDKNA reaction.

From there, they add that the Gonja Bojajiu - Mother Teresa Heritage Department has been demanding for a long time, in the form of a report, to declare Mother Teresa's heritage a national treasure in defense of the state, and within the framework of this request, they insist that the state institutions act according to the norms that are provided against all who damage the cultural and spiritual heritage.

We ask the authorities of the City of Skopje to plant another fir tree as soon as possible, but with larger dimensions, where the note will be engraved that Mother Teresa planted a fir tree in the place that was her home - they say from IDKNA - Department of Heritage of Gonca Boyadziu - Mother Teresa

A new kindergarten will be built in Butel

The water in Skopje is safe and free of microorganisms, said Vodovod and Sewerage

Weak interest in installing photovoltaics: What is hesitating Skopjes, the expensive investment or the slow procedure?