The government rejected all opposition amendments to next year's state budget 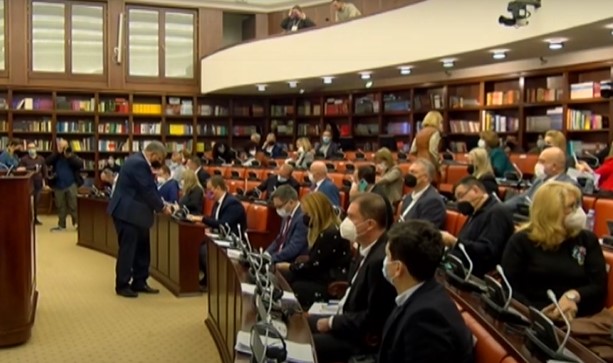 Session of the Parliamentary Committee on Finance and Financing and Budget / November 15, 2021 / photo: TV24 / printscreen

One billion denars for subsidies for photovoltaic panels for households for electricity production, and increase of subsidies for installation of gas appliances in cars were part of the proposed amendments by the opposition for next year's draft budget, which were rejected by the Minister of Finance Fatmir Besimi , with the explanation that in the government program for green development, but also in certain ministries, money is provided for such subsidies.

"The part of the green development program states that the General Secretariat will propose programs as an institution, in many other similar budget items that are realized by budget users, those programs are adopted after the adoption of the budget in the Assembly. "Before we have an approved budget, no program can start because we do not have documents on the basis of which the programs will be prepared," Besimi said.

The MPs from VMRO-DPMNE requested an insight into the green development program because, according to them, the proposed budget does not show how much money is planned to be allocated for such subsidies.

"It is a bit ungrateful for us to wait like this for what will be in that green development program after the budget is passed and in the meantime all your excuses why these environmental amendments are not accepted are reduced to an explanation that it is provided in the green development program . "Tell us the exact name of the program, the exact amounts and why, because these amendments are given on the basis that there is no insight into the budget, which means green development," said Velika Stojkova Serafimovska from VMRO-DPMNE.

The MPs in the committee have so far discussed ten amendments out of a total of 200 submitted. The amendment debate will last two more days, after which the text will be submitted to the Government, which should incorporate the accepted amendments. The expectations are that the budget will be approved by December 10.