VIDEO | Residents of Novo Maalo: Lawsuits if the blockades for the realization of the "Grand" complex continue 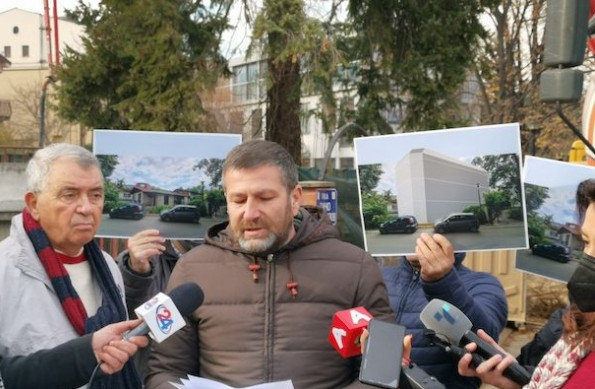 Residents of Novo Maalo are announcing lawsuits if, as they say, the attempts to block the realization of the "Grand" complex continue. They point out that they are revolted by the reactions of the civic initiative "Chance for the Center" and the attempt to suspend the parking complex opposite the "Holiday Inn", which began construction on November 22 this year.

- For the past 70 years we have been victims of the institutions that led us through endless labyrinths and we will not allow some activists to play with us. Exactly because of those activists and specifically the current councilor in the Municipality of Centar Jana Belcheva, for years we were not allowed to make any intervention in our own home, in order to improve our living conditions, says Igor Stojanov, a resident of Novo Maalo.

Stojanov pointed out that with the memorandum that Belcheva brought in 2017, as president of the Municipal Council, they suffered damage and added that she does not say why the disputed DUP J07 in Vodno was excluded.

- The detailed urban plan envisages a fivefold increase in the total built-up area of ​​the buildings and a fourfold increase in the number of storeys. That means these ground floor sheds here can now have a plus two floors and an attic, says Igor Stojanov.

She is working, she accuses, for Belcheva's personal interest, ie for her family's property.

- She puts her personal interest before the interests of her fellow citizens in the Municipality of Centar, whom she keeps in agony for three years with her illegal moratorium. At the same time, we announce that we will submit a complaint to the Council of the Municipality of Centar, the mayor and the Anticorruption to investigate this case, and we invite the media to investigate why DUP J07 was not under the moratorium of Jana Belcheva. No one has the right to decide on our property and our lives and very importantly for all so-called activists - Novo Maalo is not a public space, said Stojanov.

He announced that if the blockades continue, they will file a lawsuit to the competent authorities and personally against Jana Belcheva.

Activists from "Chance for Center" announced a protest in front of the Public Prosecutor's Office tomorrow in order to prevent the construction of high-rise buildings opposite the "Holiday Inn". They demand a halt to construction activities on suspicion of corruption and abuse of office, and the Public Prosecutor's Office to urgently act on the initiative of the State Commission for Prevention of Corruption. At the same time, the Government should allocate funds from the central budget if the Municipality of Centar does not have enough for new residents to get a solution and a way out of the inhumane conditions in which they live, and the Council of the Municipality of Centar to urgently approve the suspension report for further implementation of this DUP. They also demand that the State Inspectorate for Construction and Urban Planning immediately conduct supervision based on the complaint submitted by GREEN HUMANITIES, and for the location to announce an international competition that will guarantee a green and humane solution.

- More than 3500 people die every year in the country from polluted air! If the construction is allowed, the air flow will be prevented even more, which will result in even greater pollution and further deterioration of the quality of life in the center of Skopje. The center will be paralyzed by traffic jams and people who live and work nearby will not be able to perform daily duties, said the citizens' initiative.

On November 22, 2021, the construction of the first phase of the complex "Grand" began, planned for the construction of Building Plot 1.1 within DUP C08. "MG Fashion" announced that they will compensate all residents of Novo Maalo at their own expense, in order to feel the benefits of modern urban living in the capital through urban regeneration of this area in the heart of Skopje.

The project envisions the construction of three buildings with 15, 20 and 25 floors, with 400 apartments in which about 1.200 inhabitants are expected to live. 1.000 parking spaces are envisaged, a green area of ​​6.520 square meters, while the total area of ​​the building is 13.654 square meters.

Report the irregularities in the work of the PE "City Parking"!

The pedestal of the monument of Slavko Janevski is broken

Parts of Kisela Voda and Sopishte will be without electricity tomorrow