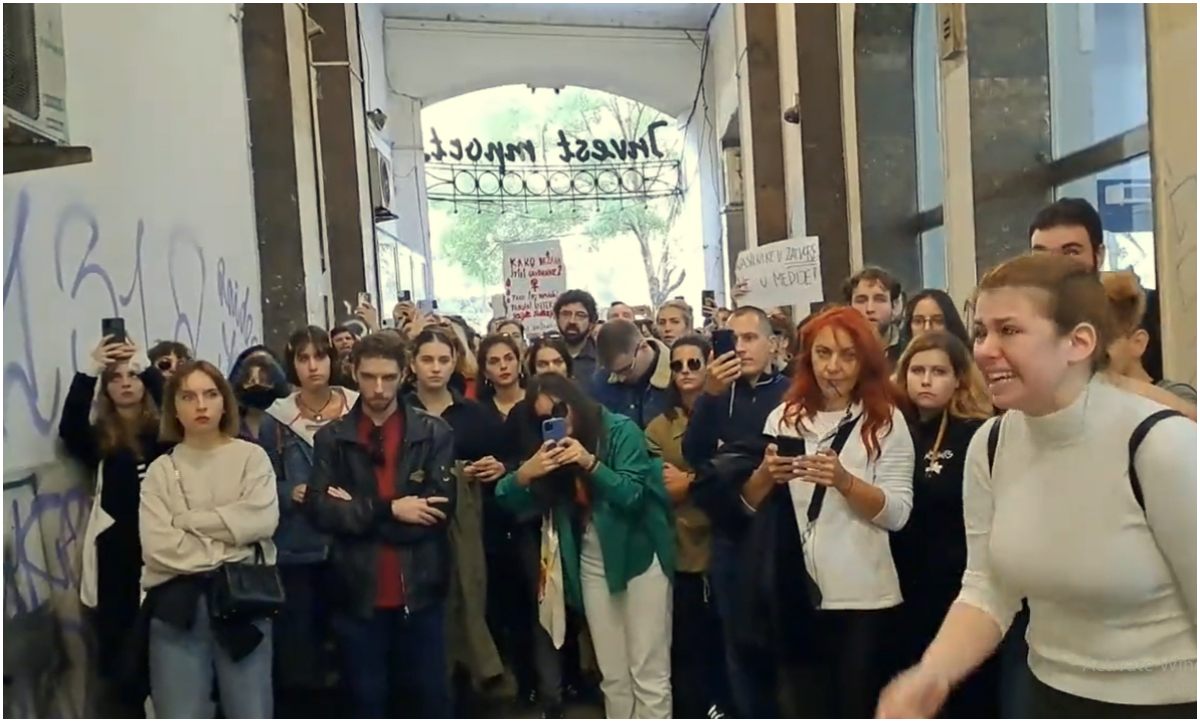 Speech by an activist in Serbia / Photo: Printscreen/Twitter

Hundreds of protesters, most of them girls and women, protested yesterday in front of the editorial office of the tabloid "Informer" in the center of Belgrade, demanding responsibility from the owner and the editor for the published interview with a convicted serial rapist.

The participants protested about the published interview with Igor Milosevic, to whom the tabloid dedicated the entire front page of the new issue, in which he boasts that he has spent only three months in freedom since he was 14 years old.

These days, social networks are flooded with reactions of outraged citizens of Serbia. The portal zaprodna.nova.rs published part of a girl's speech at yesterday's protest dedicated to the police who protected the building.

"Your mother is a woman, your sister is a woman, your daughter is a woman – and you have come to protect the Informer!" Arrest me by tomorrow, I know I probably won't even get a job in this country after this. But you insult us every day by not coming after three hours when someone reports violence."

These are the words of the activist who "set fire" to the crowd at yesterday's protest in front of the Informer editorial office. Her short but powerful speech went viral on social media – and the message she sent to the police is very clear.

The protest was organized by the feminist movement "Women's Solidarity" due to the publication of an interview with a serial rapist who was recently released. The crowd blocked the traffic in front of the newsroom for an hour and a half, and threw eggs at the building.

"Women's Solidarity" also expressed concern about the repeated trauma that the media inflicts on rape victims.

"Their experience is underestimated and questioned, and survivors often go through secondary victimization and constant violence from institutions." "Instead of protecting them and bringing justice, institutions treat women as equally guilty for the violence they experienced," they say.

The Deputy Prime Minister and President of the Coordinating Body for Gender Equality of Serbia also reacted. Prof. Dr. Zorana Mihajlovic, which for the portal "Nova.rsHe said that the media, instead of spreading fear and panic for the sake of sensationalist reporting, should be concerned with the safety of women in public places and prevention of sexual assaults on women.

It is also important to note that since the beginning of the year in Serbia, 23 women have been killed in family-partner relationships. The fact that every third woman who reported violence ended up being killed is particularly gruesome, which is a sufficient indication that the competent authorities did not react in time, nor did they take all possible steps to protect women from abusers.

The police did not give permission for the protest on December 6, for Berisha it is invalid and there will be a protest

In a police operation in Serbia, 1000 migrants were transferred to reception centers, weapons and ammunition were discovered

The situation in Kosovo remains tense, assesses the Serbian Minister of Defense