VIDEO | Vuќi гласа voted in the referendum: We are with our people 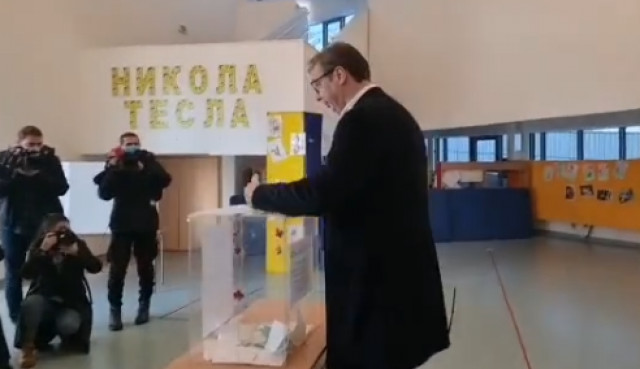 The President of Serbia, Aleksandar Vuќi., This morning voted in the republic referendum for changing the Constitution in the part of the judiciary, B92 reported.

After the vote, Vucic said that Serbia had seen the concerns of Serbs in Kosovo and that Pristina's decision would have far-reaching consequences.

"We are with our people from Kosovo and Macedonia and we will always be with them," Vucic said.

Kosovo Serbs announced protests at noon today in several towns and villages in which they are in the majority, due to the resolution of the Kosovo Parliament, which they are forbidden to vote in their constituencies in today's referendum in Serbia.

In addition, the announcements of the protests say that the citizens of Serbian nationality will express their revolt and the decision of Belgrade to agree to the de facto ban imposed by the Kosovo Parliament. Serbian authorities and the Republic Election Commission have announced that Serbs from Kosovo will be able to cast their ballots in several nearby towns in Serbia: Raska, Novi Pazar, Prokuplje and Vranje.

SOC approved and blessed, and Fanar should confirm the autocephaly of MOC-OA