With all its flaws, "Popova Shapka" is buzzing with tourists, everyone is waiting for the announced investments
VIDEO | Andonovic: Is the Middle East becoming a new focal point for defocusing the war in Ukraine?
VIDEO INTERVIEW | Timotej Andonovski and Erhan Jajovski, virtual drivers: Champions of Le Mans from their room!
Macedonians play it safe: everything that flies is not eaten!
Interview with Vladimir Lazovski and Isabella Novotny from the Theater for Children and Youth: It's a good feeling when foundations are laid 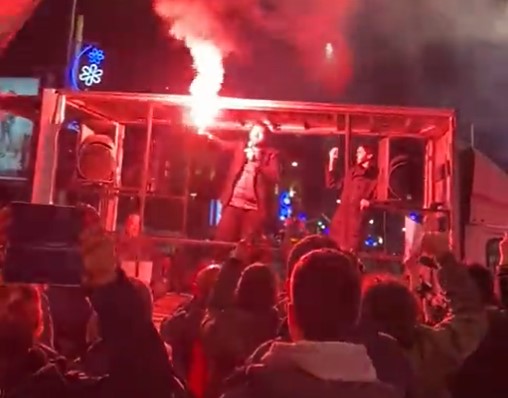 A protest against the police violence against the citizens who blocked the traffic through Serbia yesterday started in Belgrade at the Republic Square tonight at 18 pm.

The protest, which is attended by several thousand citizens, is organized by the movement "Let's not drown Belgrade", the Ecological Uprising, the Open Platform "Action", and the protest was supported by Zoran Lutovac, the president of the opposition Democratic Party. Hundreds of uniformed police officers are present.

Get up, get up! pic.twitter.com/no12pZapza

Dobrica Veselinovic from the movement "Let's not drown Belgrade" said that after yesterday's violence when masked hooligans attacked the gathered citizens in Sabac with an excavator, they gathered in Belgrade today to tell the people what really happened in this Serbian city.

- We are here for people to understand that the Serbian Progressive Party (SNS) has abused the state to allow hooligans to do what they want. Some other people were detained in Sabac and we will help them in every way. We demand that they be released, and that those who are really hooligans be arrested, said Veselinovic from the movement "Let's not drown Belgrade". He said he would support the next blockade on Saturday, and called on citizens to protest tomorrow in Loznica.

After the address of the speakers on the Republic Square, the citizens started a protest walk towards the public broadcasting service RTS, where they will ask for their demands to be read on the state television.

Last night was arrested and Dragan Milovanoviрни Crni was detained for 48 hours, a protester who at yesterday's blockade of key roads in protest against the adoption of the law on land expropriation and the law on referendum prevented the driver of the excavator with members of the ruling SNS from entering the group of gathered citizens.

On the occasion of yesterday's events, the head of the Serbian Orthodox Church Porphyrije appealed in which he asked all citizens for peace and mutual respect.

In reaction to yesterday's protests, the President of Serbia, Aleksandar Vucic said that the people who blocked the roads "violated the Constitution by endangering the freedom of movement of other people", but also that the police did not intervene.

- They brag when they gather 3.000 people, to gather 5.000, you will agree, God is not exactly what. Gazelle was blocked by 50 people on one side, 70 on the other, and two million people live in this city, said the Serbian president

With all its flaws, "Popova Shapka" is buzzing with tourists, everyone is waiting for the announced investments

Popova Shapka has been crowded with tourists for the past two weekends. The snow fell later than usual, the ski season is late, but tourists do not give up on the center, with great advantages, but also disadvantages. Get the most important news, free on Viber Atila Abdullahi, ski instructor and professor of physical culture, says that "Popova Shapka" has all the prerequisites to grow...

With all its flaws, "Popova Shapka" is buzzing with tourists, everyone is waiting for the announced investments Read More »

VIDEO | Andonovic: Is the Middle East becoming a new focal point for defocusing the war in Ukraine?

Macedonians play it safe: everything that flies is not eaten!

Interview with Vladimir Lazovski and Isabella Novotny from the Theater for Children and Youth: It's a good feeling when foundations are laid

A new problem: Albanians from southern Serbia are also looking for their own community of municipalities

According to Demostat, if Serbia accepts the European plan, it will be a member of the EU by 2030

Demostat: Serbia will be a member of the EU until 2030, but under one condition

"Racism and xenophobia are growing": Turkey urged citizens not to travel to America and Europe

VIDEO: A train crushed a car at a crossing in Serbia, did someone leave the car on the track?

Like in the Wild West: Gunmen broke into a private party in Croatia, shot people and escaped

Hoti: Kurti brought Pristina to a standstill with his reckless actions

Without SDA, there is no government in the Federation of BiH, says Izetbegović

VIDEO INTERVIEW | Mile Lefkov: Notary signatures are valid, VMRO-DPMNE will not vote to change the Constitution

MP of VMRO-DPMNE, Mile Lefkov, claims that the notarial statements of his colleagues from the party are valid and that his party will not support the announced changes to the Macedonian Constitution, with which citizens of Bulgarian nationality are expected to be included in the highest legal act of Macedonia. Get the most important news, for free on Viber - We're in...