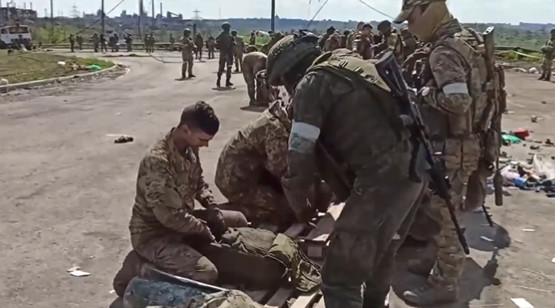 The video shows Russian troops checking Ukrainian fighters. Some of the fighters showed their tattoos in front of the camera at the request of Russian soldiers.

Russian Defense Ministry spokesman Igor Konashenko said 2.439 Ukrainian defense personnel had surrendered at the Azovstal steel plant since May 16 and the last 500 on Friday.

Ukraine hopes to replace Azovstal's troops with Russian prisoners, although several senior Russian politicians have called for his trial and one has even called for his execution.

In a video statement, Azov Battalion Commander Denis Prokopenko said that civilians and heavily wounded Ukrainian soldiers had been evacuated from the factory. Kremlin spokesman Dmitry Peskov said Ukrainian fighters would be treated in accordance with international norms for prisoners of war.

Ukrainian President Vladimir Zelensky announced the surrender of Azovstal fighters. He noted that the fighters who were in the besieged Azovstal were told to come out and save their lives.

"The boys received a clear signal from military commanders on Friday that they could come out and save lives," Zelensky told Ukrainian television.

Day The day has come: Mariupol and the Azovstal 'steel plant are completely liberated by the Allied Forces of Russia, DPR & LPR.

The last group of the Azov battalion Neo-Nazis and Ukrainian servicemen surrendered - over 2400 militants laid down arms. pic.twitter.com/KWuhzAub7r