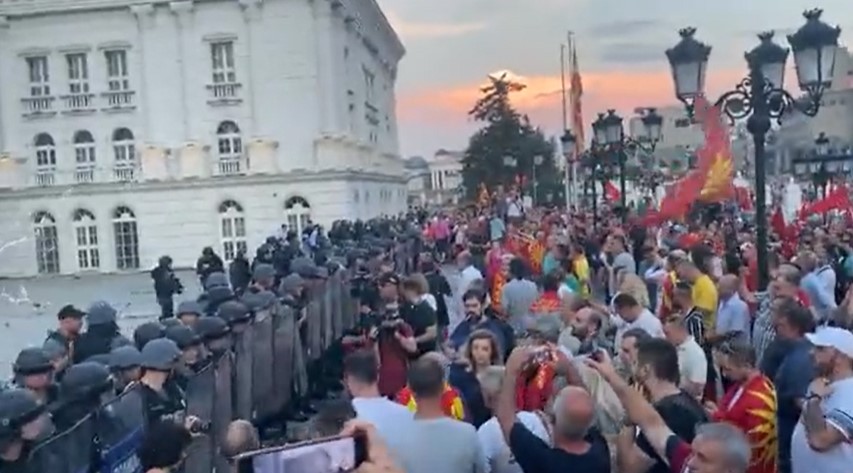 A new mass is being held in front of the Government tonight protest organized by the opposition, at which citizens express their dissatisfaction with the so-called "French proposal" for the start of Macedonia's EU membership negotiations and demand the resignation of the government of Dimitar Kovacevski.

The protest started tensely, with eggs, toilet paper and bottles being thrown at the Government building, after which the protective fence was demolished, and there was a push with the police.

Cries of "Resignation" and "Become Macedonians" are heard. Some of the protesters clashed with the police who set up a cordon in front of the government, after they broke through the protective fence and started throwing stones at the police. Part of the media reported that several people with phantoms were also seen in the crowd.

At the beginning of the protest, the Macedonian anthem was performed by Lambe Alabakovski, the singer suspected of setting fire to the Bulgarian cultural club in Bitola.

"If my diagnosis is a pyromaniac, your diagnosis is traitorous," Alabakovsky told the authorities today, who then symbolically set fire to a leaf on which the Prespa Agreement, the Agreement with Bulgaria and the French proposal were written.

The leader of VMRO-DPMNE, Hristijan Mickoski, today called the citizens to a large mass because, according to the information of the opposition, the government intends to accept the proposal of the French presidency tomorrow.