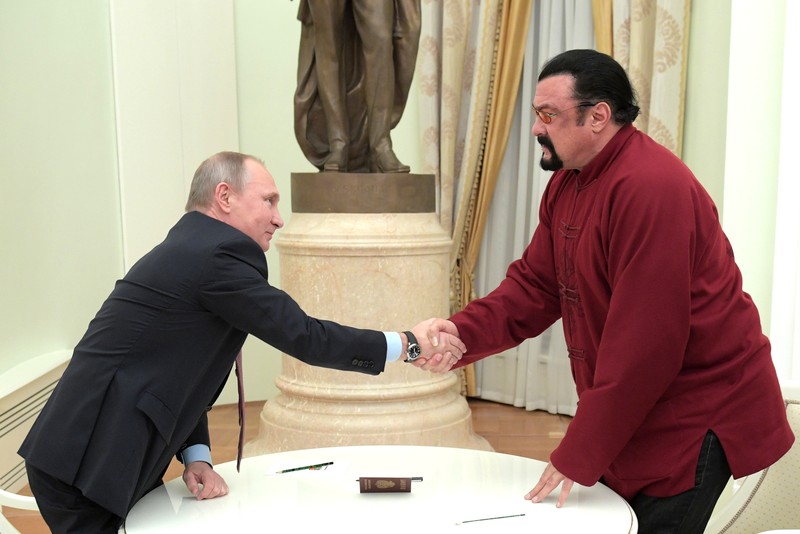 American actor Steven Seagal is filming a documentary about the situation in Donbas, the leader of the self-proclaimed Donetsk People's Republic, Denis Pushilin, said after meeting with Seagal.

"Yes, he is shooting a documentary about the war in Donbass. Today he spoke with the military prisoners in the Olenivka detention center. "Some of the prisoners were killed recently in a rocket fire from the Ukrainian side," Pushilin wrote on Telegram, TASS reported.

Pushilin said that Segal noticed that 98 percent of those who talk about the conflict in numerous media are not on the ground and therefore the world does not even know the truth.

"Seagal wants to change the world's attitude towards this war, but it will not be an easy task, however, I wish him luck," added Pushilin.

Segal visited Donbass along with Leonid Slutsky, the leader of the Liberal Democratic Party of Russia (LDPR), who is the director of the international committee of the Russian State Duma.

Steven Seagal, a vocal supporter of Vladimir Putin, appeared at a Russian-controlled prison camp at the site of a July 29 explosion that killed at least 50 Ukrainian prisoners.

I have a question, how could Steven Seagal visit #Olenivka with journalists, but the #RedCross & the @UN can't. Does Steven Seagal mean more to 🇷🇺 than international agreements?#OlenivkaMassacre #UkraineRussiaWar #UkrainianPows #Amnestyinternational #RussiaIsATerroristState pic.twitter.com/r99e6EBXtJ

Putin granted Russian citizenship to Seagal back in 2016 after Seagal spoke out against Russia's annexation of Crimea.

Ukrainian military officials have accused Russia of deliberately moving prisoners, or fighters defending Azovstal, to the Olenivka facility, knowing it would be the site of an attack.

Tonci Huljic: Whatever I do in life, I wonder if Jesus would do the same

"She wanted to be invisible": Unknown details revealed about the princess who gave up Hollywood for love

Jelena Spenjarska on the daily experience as an influencer: I am not a social service