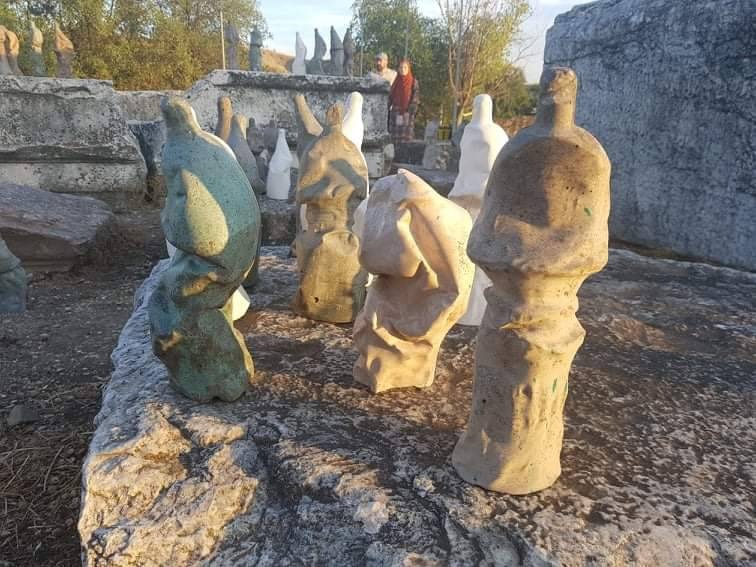 The sculptures by Petar Hadzi Boshkov distributed throughout the archeological site revived the ancient Stobi and offered visitors a timeless experience of the connection between two worlds - the ancient and the modern.

Crowds of visitors marched through the streets of Stobi - from the semicircular square, Via Sacra, the stage of the Ancient Theater and the corridor under the auditorium, the temple of Isis and Serapis and the large unexplored area that stretches to the Arched Building. All exhibited works, the author has preserved in personal property and left them to his family.

Thanks to his son, Igor Hadzi Boshkov were borrowed and transferred directly from the studio to the Stobi site.

"All these sculptures are actually part of my collection, I keep them as a treasure of Macedonia. I take care of myself and take care of this national treasure that stands in his studio. When the idea came to make this exhibition, it was intriguing for me to show the people everything in his studio, because most of these sculptures were packaged literally like in a warehouse and so far there was no interest from the institutions and that especially inspired me to show the works. "I also wanted to encourage young artists not to be afraid to exhibit their works in open space, because we have wonderful exhibition spaces in Macedonia," Igor Hadzi Boshkov told Utrinski Brief.

The idea for this exhibition came from Spase Perovski, director of NI "Stobi", as part of the long-term project "Stobi - a living city", which says that they have taken all necessary measures to protect the works that are placed outdoors at 24 points throughout Stobi . "It was a challenge for me to present the works of Petar Hadzi Boshkov, the most important sculptor of the second half of the 20th century, in the ancient city of Stobi. Although his work has been thoroughly researched, several monographs have been published, several retrospective exhibitions have been made, but for someone who is a dedicated researcher the challenge is even greater to find points that may yet be explored. In the process of work we have determined that there are such points, especially that make a special connection in the mutual disclosure of what is the value of the locality Stobi and what is our immediate past. "But that modern heritage can easily be lost if it is not treated properly, researched and affirmed," said Vladimir Jancevski, curator of the exhibition.

The large exhibition of works by Petar Hadzi Boshkov entitled "Discovering the Future: Archeology of Modernity" includes forty representative works from several creative phases of Hadzi Boshkov, covering a period of four decades (1962-2004) by one of the most important Macedonian contemporary artists.

Petar Hadzi Boshkov (1928 - 2015) is one of the most important artists in the second half of the 20th century. A man with an international spirit and an open worldview, educated in several important centers, including Ljubljana, where he graduated, and London, where he specialized at the Royal College of Art. London was especially important for his development, where he had the opportunity to explore and develop a friendship with the great British sculptor Henry Moore. The British Museum, which he visited almost every day, is also extremely important to him. He spent hours in front of the most beautiful and significant works of Egyptian, ancient Greek and Roman art, which were his inspiration in the early creative period, and that connection will remain strong and will continue to develop at a higher level. As a built author, he was a visiting professor at the Cooper Union Art School in New York, after which he returned to his Skopje to bring the world home. Here he continued his pedagogical activity, first as a professor at the Art School in Skopje (1968-1980), and later as a professor and first dean of the Faculty of Fine Arts in Skopje, until his retirement.

VIDEO | Dashtevski: Macedonia is a country where the election results arrive the fastest

EXCLUSIVE VIDEO | Spasovski for UB: I expect a peaceful election day - we had a peaceful campaign

VIDEO | Ziberi: The ombudsman is an institution that cares about fundamental constitutional values