The minimum salary will be 20.500 denars, increases in the administration as well
Macedonia is not dependent on Russian oil
Firefighters from TPPE-Tetovo left for Turkey to help deal with the consequences of the earthquake
VIDEO | Andonovic: Vucic, dissatisfied with the coalition, will call for extraordinary parliamentary elections
Tonino Pitsula: Bulgaria uses EU membership to put pressure on North Macedonia

VIDEO: Steinmeier was welcomed in Skopje with the highest state and military honors 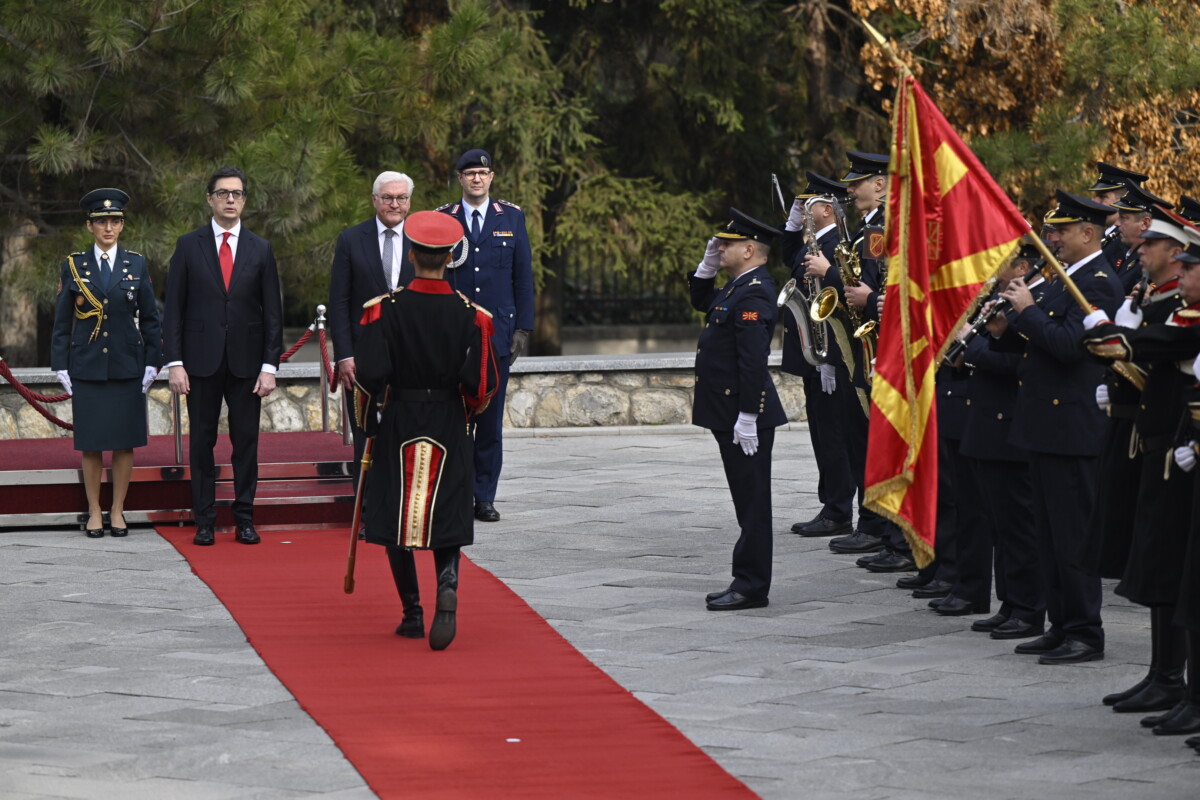 Today, at a ceremony with the highest state and military honors, President Stevo Pendarovski welcomed the President of the Federal Republic of Germany, Frank-Walter Steinmeier, who is on an official visit to the Republic of North Macedonia.

President Pendarovski and President Steinmeier held a face-to-face meeting, which was followed by a plenary meeting of the two delegations. The focus of the talks are the overall bilateral relations between North Macedonia and Germany, the partnership in the NATO Alliance and the war in Ukraine, the course of accession negotiations and the European perspective of North Macedonia, as well as the possibilities for strengthening economic cooperation and mitigating the consequences of the energy crisis.

President Pendarovski emphasized that the visit by the German president in conditions of changed geopolitics, security threats and energy challenges on the European continent, is a confirmation of our friendship and Germany's firm readiness to support our region. He pointed out that North Macedonia highly values ​​Germany's commitment to the process of North Macedonia's European integration, development and reform agenda, and especially its constructive role in the Berlin process.

After the plenary meeting of the delegations, President Pendarovski and President Steinmeier are scheduled to hold a joint press conference.

My visit to the region aims to signal that the Western Balkans is in no way forgotten. When the appropriate progress is made domestically, then the path to EU membership will become more certain, says German President Frank-Walter Steinmeier.

- My trip aims to signal that we had debates with colleagues from the Western Balkans, who expressed their concerns, that Ukraine's desire to approach and enter the EU may be treated differently, will be accelerated, unlike the candidacies of the countries of the Western Balkans. I understand that impatience, but like many others, I also want to assure that the Western Balkans is not forgotten in any case. And the trip to the two countries, North Macedonia and Albania, is a function of that message for the region, he says in an interview with Deutsche Welle.

Regarding the fact that the countries of the region are setting the year 2030 as a framework for entering the EU, the head of the German state says that he remains of the opinion that it depends on the readiness for internal reforms in the states and on the readiness to implement those reforms.

-Even today, we can argue differently in relation to the countries of the Western Balkans, such as North Macedonia and Albania, which have taken decisive steps forward. It increases the confidence of the countries and shows others in the Western Balkans region that this step is paying off. And besides, we must not forget that beyond the issue of accession in the narrower sense, progress is also achieved on that path, says the German president.

He reminds that the process for the Western Balkans started in Berlin many years ago.

- At first it was difficult, as I remember. But when I think about the last summit, I think that travel with ID cards, the mutual recognition of school and university degrees, the willingness of the EU to help with energy problems, that is a significant progress. In this regard, I understand the impatience, no doubt. But we are not at the stage where we would discourage anyone. And that is certainly not because of Ukraine, because we are all paying attention to the Western Balkans, but we are also following North Macedonia and Albania, where there is progress, says Steinmeier, who is on a two-day first official visit to this country.

The visit of a German president is always an important event, even when it comes to the largest countries in the world, and not when they come to a small European country like ours. Although he certainly would not like to talk about it much, I must mention that President Steinmeier played a significant role in the efforts to overcome the Bulgarian blockade of our European integration, says President Stevo Pendarovski for DV, who today and tomorrow is the host of his German colleague Frank-Walter Steinmeier.

- The personal authority and integrity of the current German president is a great added value, because, indisputably, he is one of the biggest political authorities in the world in the last decade. My first bilateral visit as President was precisely to Berlin and since then I had the honor of meeting Mr. Steinmeier on several occasions, during which we built personal relationships of mutual trust and respect. Although, he certainly would not want to talk about it much, I must mention that President Steinmeier played a significant role in the efforts to overcome the Bulgarian blockade of our European integrations, says Pendarovski.

He emphasizes that President Steinmeier has an enviable background and experience in the field of diplomacy and security, and is also one of the best experts in our region. So, surely, he says, he will have something to say about how to better control the tensions that arise from time to time and possibly move closer to sustainable solutions to the several open issues that exist in the Western Balkans.

He states that next year North Macedonia and Germany will mark 30 years since the establishment of diplomatic relations (16.12.1993), and during that entire period Berlin has made a significant contribution to the stabilization of the Macedonian economy.

- Any objective analysis will show that - if the USA and Great Britain were key external actors, which in the early 90s helped us to establish the young Macedonian state in the international framework, Germany, without a doubt, contributed the most to stabilizing the economy and the standard of living of the citizens. Only a few facts are enough to support this thesis: Germany has been our biggest trading partner for years, 45% of our exports are placed in Germany, and 200 companies with German capital employ about 15.000 Macedonian citizens, emphasizes President Pendarovski.

German President Steinmeier will be welcomed today in Villa Vodno with the highest state and military honors, followed by a face-to-face meeting of the two presidents and a plenary meeting of the delegations of North Macedonia and Germany. Steinmeier will also address the Parliament, and his meeting with Prime Minister Dimitar Kovacevski is scheduled for the afternoon in the Government.

Within the framework of the two-day visit, in the church "St. Spas" in Skopje, Steinmeier and Pendarovski will lay wreaths on the grave of Gotse Delchev.

This is the first visit of Federal President Steinmeier to the Republic of North Macedonia.

The Ministry of Finance has completed all the necessary calculations, which means that the announced increase in the minimum wage will be realized, as well as the linear increase in wages in the public sector, informed the Minister of Economy Kreshnik Bekteshi. According to the announcements of the government's economic team in March, the minimum wage will be around MKD 20.500 and this will also apply...

The minimum salary will be 20.500 denars, increases in the administration as well Read More »

GALLERY | The tragedy in Turkey and Syria in twenty photos

Maksuti: Rescue teams headed to the region affected by the earthquake in Turkey

Ottomans with a message to Bulgaria: Stop the provocations