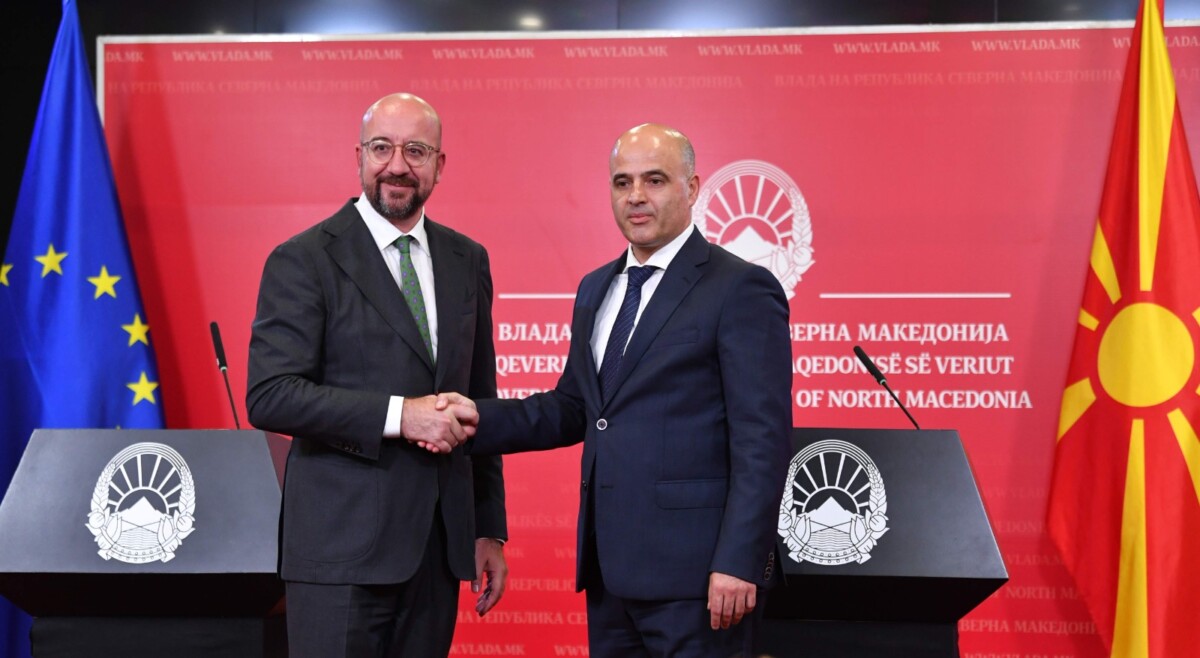 In an attempt to show support for the French proposal and to confirm the Union's commitment to the integration of Macedonia, in Skopje the President of the Council of Europe Charles Michel today held separate meetings, first with President Pendarovski, and later with Prime Minister Kovacevski.

From what was announced by the offices of the Prime Minister and the President, the guest from Brussels once again emphasized the support and commitment of the European Union for the beginning of negotiations in the country, pointing out that these are key moments for the progress of our country from an economic, political and sociological point of view. .

At the press conference with the high-ranking guest from Brussels, Charles Michel, Prime Minister Kovacevski emphasized that we should think rationally, wisely and responsibly. According to him, the French proposal protects the Macedonian red lines.

"With the modified, specified, supplemented French proposal, we got what we have been fighting for for years, which is a clean formulation in the Macedonian language. The key position, the state position, which was the most important for us and to which we remained consistent, has been fulfilled. With this proposition all speculations alluding to the contrary are false and untrue. We Macedonians are proud of our history, we are proud of our language, we are proud of our identity with all its aspects. Nobody has managed to assimilate the Macedonian people so far, nor has assimilated it, nor will it ever happen to assimilate it. And that is a fact", Kovacevski said.

Michel stressed that if they say yes, an intergovernmental conference will begin in a few days, and the Macedonian language will remain ours.

"With this proposal, we are clearly discussing the Macedonian language, the Macedonian language is your language, and the proposal respects that, the entire EU legislation will be translated into the Macedonian language. We are also aware of the concerns that some people have expressed regarding your national identity and you can count on my full support as President of the European Council that I will systematically stand behind your legitimate rights. Macedonians, you have a historic opportunity to say yes, yes at the beginning of the negotiations, yes to the EU, yes for our children, your country has the opportunity to once again become a champion in enlargement, it will introduce a new dynamic, these reforms will bring you closer to the EU, will bring stability and resilience to your people, you can count on political and financial support", said the President of the European Council Michel.

On the other hand, today, for the fourth day in a row, several hundred people gathered in front of the Government at noon to express a protest due to the previously announced review and possible acceptance of the proposal by the Government.

MP from VMRO-DPMNE Dragan Kovacki at the press conference today in front of the Government ordered the Prime Minister to come to his senses and reject the French proposal because it represents an ultimatum that contains all the Bulgarian demands.

- The proposal that the Kovacevski government accepts is unacceptable for Macedonia. The people, intellectuals, social actors and the expert public say loudly that this proposal to start negotiations is harmful for Macedonia and leads to two scenarios, which is worse for the country, one is eternal negotiation, and the second is assimilation at the behest of Bulgaria, he said. MP from VMRO-DPMNE Dragan Kovacki.

The gathered citizens told "Free Press" that they will continue to protest until the government rejects the proposal from Paris in its entirety. At the same time, citizens do not approve of violent protests and the radicalization of gatherings.

Meanwhile, thousands of people protested yesterday in Skopje for the third night against the French proposal to remove the Bulgarian veto for the start of North Macedonia's negotiations with the European Union. Part of the protesters, led by the leader of the smaller Left political party, Dimitar Apasiev, pushed the protective fence in front of the Government and the Parliament. They threw rolls of paper, plastic bottles, water balloons and eggs at the Government. The demonstrators believe that the French proposal Bulgarianizes Macedonia, does not recognize the Macedonian language and history, and they demand that the government reject the ultimatum.