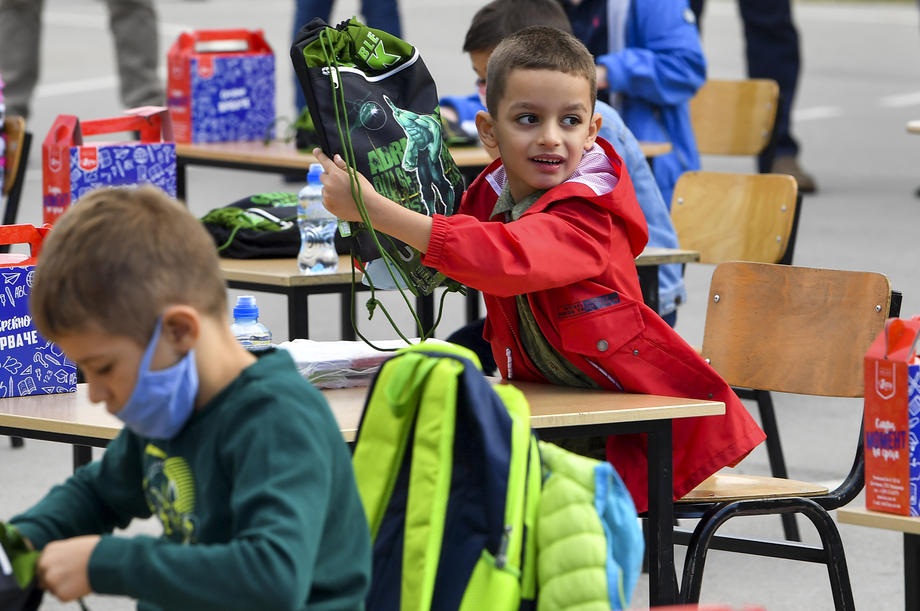 Minister of Education and Science Jeton Shaqiri says that the procedure for selecting an economic operator for the printing and distribution of the textbooks for the subjects in primary education for which the Bureau for the Development of Education has prepared new curricula is underway. He hopes that they will be delivered to the schools on time, but adds that if there is a delay, the Ministry of Education and Science (MES) has provided printed appropriate materials until the students receive the textbooks.

He clarified that according to the Concept adopted by the Ministry of Education and Culture last year, the new curricula are being introduced in stages - last year for the first and fourth grades, and this school year the students from the second and fifth grades will learn new curricula.

"From September 1, there will be textbooks in the third, sixth, seventh, eighth, and ninth grades that follow the old concept, and I think they will be delivered to the schools in a timely manner. For the new concept, we are in the approval phase of both the economic operator and some textbooks, but we still have 20 days to go and I expect these to be positively completed by the beginning of the new school year," Minister Shaqiri said in a guest appearance on Sitel news. .

According to the Concept for Basic Education, apart from printed books, textbooks from the fourth and higher grades will also be available in digital format on the portal e-ucebnici.mon.gov.mk.

Regarding the information that the students have not yet received certificates, Minister Shaqiri emphasized that their provision is not the responsibility of the Ministry of Education, but of the Bureau of Education. However, he says, according to the information he has, the entire procedure for obtaining certificates has been completed and that students are already starting to receive them.

"Certificates are not a problem for the Ministry. The call for printing certificates and as a procedure is in the Education Development Bureau. They had an appeals process in the procedure to select an operator. Immediately after the information that the children did not have certificates, I requested that those children who enroll in secondary education be immediately provided with certificates, but I also know that this problem has been solved in the Education Development Bureau, and maybe it is currently being delivered of certificates to primary and secondary schools," said Minister Shaqiri.

When asked about the digitization of the educational process, he says that as a minister he is in favor of having printed textbooks, but he emphasizes that this process must continue. Regarding the extent to which the Government and the Ministry are prepared to provide digital devices for children, Shaqiri points out that through a project with the World Bank, design is being carried out in all primary schools in the part of the current infrastructure that concerns digitization and connection in several networks.

"After receiving those designs for all elementary schools, we will learn about the possibilities for implementation in the infrastructure. In addition to working in the digitalization process, we will also need to work in the digitalization process of the infrastructure inside primary schools. And we will be able to implement this together with the local self-government and the central government. "Although we have tablet devices delivered to students, to schools, one of the observations was that many schools and from our analyzes are not connected in a network as they should be available," said Minister Shaqiri.