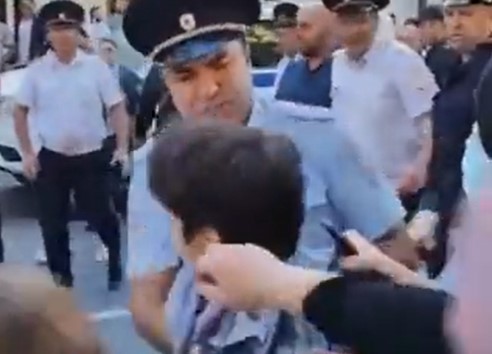 Dozens of people were arrested in today's violent protests that broke out in the Russian republic of Dagestan, after a large number of people gathered in the capital Makhachkala to express their revolt against the authorities' order to mobilize part of the population for the front in Ukraine. Videos that testify to the ferocity of the clashes between the protesters, most of whom were women, and the police are constantly appearing on social networks.

Earlier, a video was published showing how a group of women surround and attack a policeman, who flees through the crowd.

A cop is running away from women, who are protesting against the war and mobilization in Makhachkala, Dagestan.

There were also protests in the town of Endirej, where local residents blocked the entrance to the town and did not allow the 110 boys and men who were mobilized to be taken away. The police fired automatic rifles into the air to appease angry protesters.

After the protests broke out, the protesters were further angered by the president of Dagestan, Sergei Melikov, who stated that the mobilization order in the republic will be implemented "strictly according to the criteria published by the President". Russian leader Vladimir Putin this week announced a "partial mobilization" of the military-capable population for the war in Ukraine, and residents of Dagestan charge that most reservists are being mobilized in their predominantly Muslim republic.

According to local media, around 150 people were arrested at today's protests. The demonstrators accused that people in civilian clothes, who were not policemen, took part in the police chase with the demonstrators. The "Morning of Dagestan" group on Telegram issued a call for a "hunt" for supporters of the mobilization and "those who beat women today", as well as a call for a general revolt against the central authorities in Moscow and their satellites in Dagestan.