VIDEO: Protest in front of the Government against the French proposal 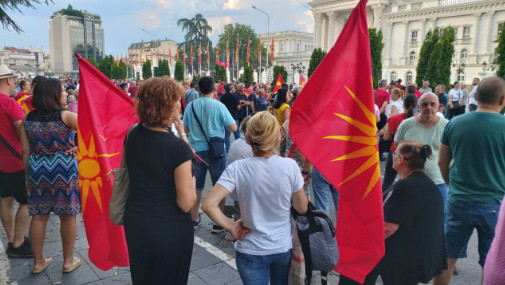 Tonight, a protest is being held in front of the Government against the acceptance of the French proposal to lift the Bulgarian veto and open the negotiations for membership of North Macedonia in the EU.

The protest under the motto "ULTIMATE - No thanks" was supported by several political parties and civil society organizations. They are against the Government signing the French proposal, which, as they point out, is extremely bad for the Macedonian people and Macedonian national interests.

The protest also received support from the largest opposition party VMRO-DPMNE, whose leader Hristija Mickoski called on citizens to join, in order, as he said, to defend what is called European value and to save the negotiation process with the European Union.

According to Mickoski, "the proposal is an ultimatum and a Bulgarian dictate for megalomaniacal demands and historical aspirations towards Macedonia".