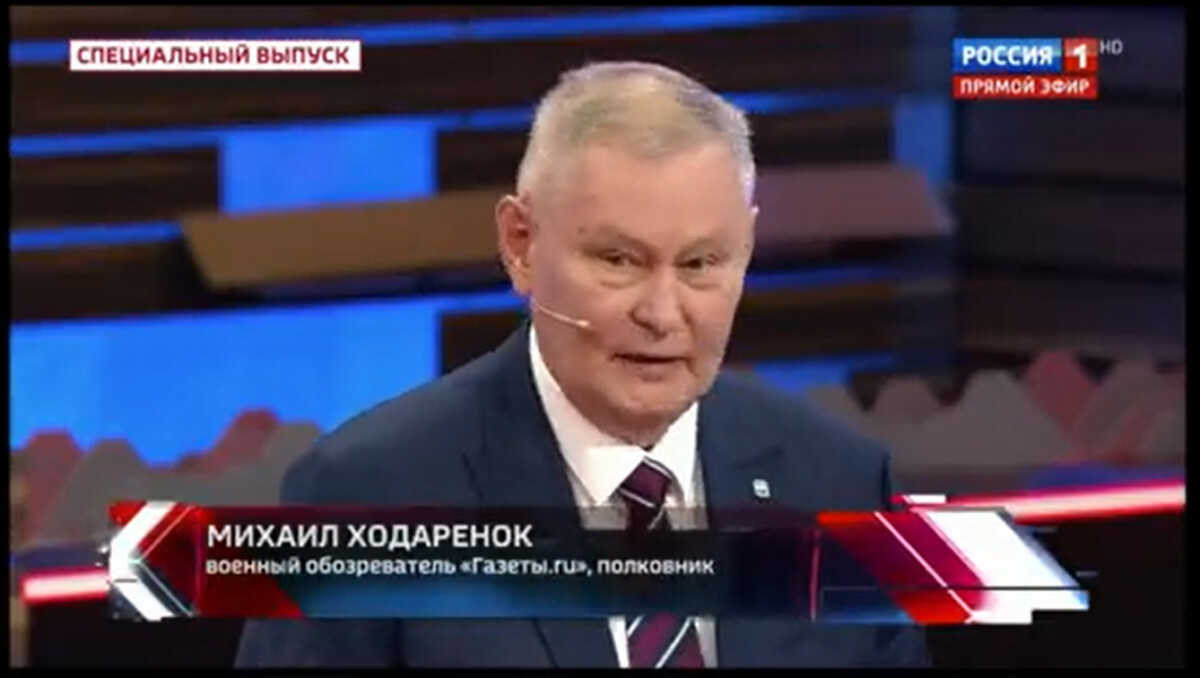 Let us not be fooled, Russia is completely isolated, Ukraine will have a million people under arms

The firing of missiles at Finland is ridiculous, and strategists in Moscow should keep in mind that they will soon be fighting against 1 million Ukrainians with weapons and very high morale, ready to die defending their country. This was stated by the influential Russian retired colonel in a debate show on the First Channel of Russian state television. Mikhail Khodaryonok, who is considered one of the most respected defense analysts and columnists.

Khodaryonok sharply criticized the strategy of the Russian military campaign, not going into the reasons for the intervention and refraining from direct criticism of the political leadership in the Kremlin, because of which he was probably not censored by the strict propaganda machinery.

Khodaryonok also criticized reports of fighting on the front lines and the building of a "victorious atmosphere", saying "we should not soften information" with reports of "declining morale in the Ukrainian army".

- The main thing in our profession is to keep the feeling of military-political realism. "If you go through that, sooner or later, the reality of history will strike you so hard that you will regret it," the retired colonel told the confused interlocutors and host of the debate on state television Russia 1.

Commenting on reports that Ukrainian troops were facing declining morale and not being funded, Khodaryonok said these were "isolated cases".

- Each issue should be considered as a whole, from an overall strategic position and it is desirable to take into account the strategic situation in the near future. First, I must say, is not to soften the information, because information is being spread about some kind of moral and psychological collapse of morality in the Ukrainian Armed Forces, which are supposedly on the brink of some kind of moral crisis, and so on. All this, to put it mildly, is false. "Of course there are cases, prisoners of war and certain units, but these are isolated cases," said the retired colonel.

Morality is crucial for victory

He added that with each passing day of the war, the amount of weapons arriving in Ukraine from Western countries is increasing and that the Russian enemy is becoming more powerful.

- The situation from an overall strategic position is that the Ukrainian Armed Forces are capable of arming a million people. They say to themselves: "It is not a problem for us to mobilize a million people." The question is to what extent they can equip the army with modern weapons and equipment. They themselves, of course, could not do anything… And, given that European aid will arrive, it means that in the very near future, 1 million armed Ukrainian soldiers will have to be considered a reality. We need to keep that in mind in our operational and strategic calculations. The situation in this context, for us, honestly, will get worse - warned Khodaryonok.

He dismissed the host's remarks that Ukrainian forces have only a small number of "professional" troops and that they rely on reserve forces.

Do not wave missiles at Finland

The retired colonel warned Russian generals not to threaten Finland with missiles, but to see its decision to join NATO as reinforced isolation of Russia.

- Let's look at the situation from an overall strategic position. Do not wave missiles aimed at Finland. That, perhaps, seems striking. But the main flaw in our military-political position is that in some way we are in complete geopolitical isolation and that, as much as we hate to admit it, almost the whole world is against us. - We need to get out of such a situation - warned the defense analyst.

Some Western analysts say the colonel's assessments, which are diametrically opposed to those voiced by officials, could serve to "soften" the story being told to the Russian public that "the special operation in Ukraine is going according to plan."

His remarks coincide with reports from Kyiv and Western intelligence communities that the Russian-led offensive in Ukraine has been almost completely halted. More than a month ago, they gave up the noose around Kyiv and withdrew completely from northern Ukraine, and these days they were suppressed by the front near Kharkov and returned to Russian territory. An attempt by Russian forces to re-enter Ukrainian territory around the town of Sumy was repulsed on Monday.

Almost three months after the start of the military invasion, they still do not fully control the territory of the separatist regions of Donetsk and Luhansk. The British Ministry of Defense announced a few days ago that Russia had probably already lost a third of the ground forces with which it launched the invasion of Ukraine in February.

Kyiv and Moscow are far from new negotiations - Ukraine demands the withdrawal of the Russians, while they demand the recognition of Donbass and Crimea as part of Russia

The US Fifth Fleet offers rewards for tips on enemies

NATO will sign accession protocols with Finland and Sweden tomorrow