VIDEO | Osmani: The Macedonian language will be in the frame and it will become official in the EU 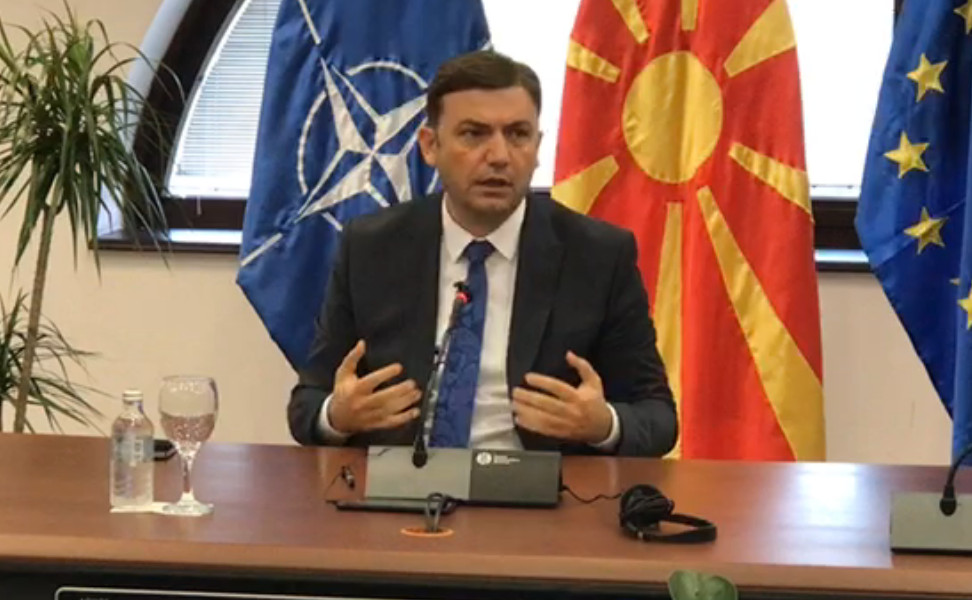 Minister of Foreign Affairs Bujar Osmani at today's press briefing, he stated that the issue of the Macedonian language has been resolved and that all lies related to it should be "dismantled".

"We convinced the 26 member states to accept our version, with Bulgaria's permission," Osmani said.

Bulgaria, as it claims, will express it in a statement, in accordance with the Portuguese proposal, that is, that the Macedonian language did not exist until 1945 and that it was one of their dialects. North Macedonia, says Osmani, will also have a statement in the minutes.

The Minister of Foreign Affairs says that both yesterday and today, he wants to dismantle "the logic that we should remain blocked in order not to be blocked in the future, which is somehow an illogical phrase in itself, both grammatically and essentially. Because for fear of being blocked we stay blocked, it's irrational and harmful for me."

It is irrational and harmful to claim that there will be a change of identity, Bulgarianization... On the contrary, says the head of diplomacy, the language issue, which was contested by some in the EU, is closed once and for all.

At the press briefing, Osmani explained how the talks took place, i.e. what and why the framework is so, clarifying that it is adopted on the same day when we say "yes" to the package.

"And this is where the Constitution of the negotiation process ends. It is the document that no longer binds us to the EU. In that framework, pure Macedonian language is written without any additions, and from that moment it becomes the official language of the EU in the negotiation process, and then with the membership in the EU," emphasizes Osmani.

He stated that Bulgaria wanted to not have that paragraph at all and that they referred to the Montenegrin model.

"In this constitution it says: 'North Macedonia will provide a translation of the European legislation into Macedonian during the negotiation process.' Take the Serbian frame – it's the same paragraph. Now the Republic of Serbia will provide the translation of the European legislation into the Serbian language. Take Albanian, take Montenegrin, absolutely the same language formulation. If this is not the biggest victory in the process, if someone considers this as a side effect of closing the issue of language forever after the UN now and the EU, there will never be a dispute about language anywhere. And now with the completed other issues, here the issues of tabs, identity issues are finished - it is finished in the framework", said Osmani.

"Yes, there is a unilateral statement by Bulgaria, but not in the frame, but in the minutes. Consider this a meeting where we adopt the framework, someone here will say yes, but I have an opinion. The recorder shouts that he said such an opinion, but it does not enter into the document, it does not enter into the conclusions. The recorder simply writes that someone said something and that once and never again. That is the Portuguese proposal – there are no legal implications after the use of the language, towards the interpretation of the language. I can most responsibly and under full responsibility say that this is a pure question and all comments regarding the language are false, manipulative out of vanity, out of ignorance and all other possible arguments, but the truth is this - the Macedonian language is officialized as such in the framework and part of it enters from the 25 European languages," said Osmani.

According to him, it is also a lie that bilateral issues, that is, that historical issues now enter the framework, because they have always been part of the framework. He compared the German proposal and the current one. Osmani says that the Constitution will be opened, but after the first international conference has passed and Montenegrins, Croats and Bulgarians will enter it.

"We are getting a historical framework to start negotiations tomorrow, the day after tomorrow when we want, for funds to start coming, to change the state's course," said Osmani.