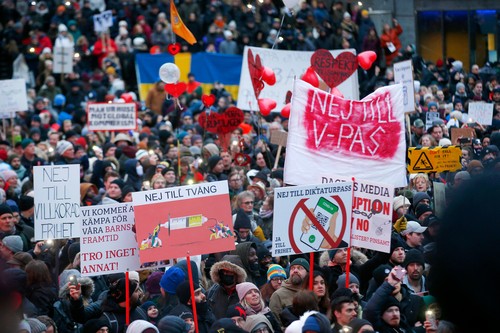 Thousands of people protested today Swedish and German cities against mandatory vaccination rules. Around 9.000 people, according to Swedish media, marched through the streets of Stockholm chanting "No to certificates for Covid, yes to freedom" at the invitation of a group called Movement for freedom.

"We have to decide for ourselves what we want with our bodies," one of the protesters, Julia Johansson, 30, told AFP in Stockholm. She estimates that Covid certificates discriminate against many people.

"Some of the protesters carried the insignia of extremist groups"

"We can say that vaccination is not an obligation," said Aida Begovic, 35, who opposes a system that forces people to undergo medical procedures they do not want.

Sweden, which has about 40.000 new infections a day in the last week, introduced covid certificates on December 1, and from December 12 they are mandatory for indoor events where more than 50 people gather.

Some of the protesters wore extremist group insignia, such as the neo-Nazi NMR, and covered their faces so that they could not be identified. More than 83 percent of Swedes over the age of 12 are fully vaccinated.

Sweden, unlike many other countries, was not afraid of the pandemic, but rather insisted on recommendations such as physical distance, work from home and the use of masks. With around 15.600 deaths per population of 10,3 million, Sweden is at the European average, slightly higher than neighboring countries Norway, Finland and Denmark.

The people of Germany join the worldwide rallies for freedom against COVID tyranny. Global protests continue against the technocratic totalitarian dystopia that globalist elites & their Leftist allies wish to usher in as the “New Normal”pic.twitter.com/zwcebPa738

Protests in Germany as well

Several thousand people protested in Germany on Saturday against measures to combat the spread of coronavirus and mandatory vaccination, while smaller groups staged counter-protests. More than 1.000 people protested peacefully in the western cities of Stuttgart and Offenbach, police said.

In Stuttgart, protesters appeared in front of the building of the public television Südwestrundfunk (SWR) to criticize the media coverage of the pandemic. They repeated the words "Lügenpresse" (fake media) and "Wir sind das Volk" (We are the people). Police, meanwhile, told participants to wear face masks.

The Offenbach rally, which drew about 1.200 people, was peaceful, police said. Meanwhile, 300 people gathered to protest. In the northern city of Schwerin, about 1.100 people joined the rally, police said. Police officers intervened when one of the participants insulted 30 participants who appeared on the protests.

NOW - Large protest against vaccine passports in central #Stockholm, the capital of Sweden.pic.twitter.com/1EKsxL0at7

Petrovska at Zakov in Sofia - We are building a strong alliance, so that the Balkans are no longer a powder keg of Europe

Trenchevska: The amendments to the collective agreement have been signed