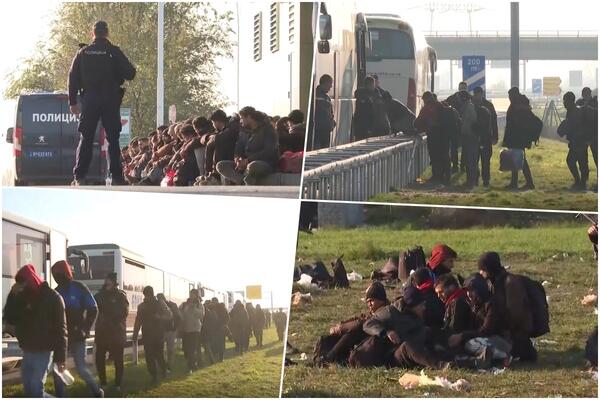 Yesterday's shooting disturbed the inhabitants of the village of Horgos, on the border between Serbia and Hungary, but also the whole country, Serbian media write.

"Courierreports that the police responded and detained more than 600 migrants in Horgosh and the nearby town of Subotica alone, who, according to the Serbian Ministry of Internal Affairs, were found with weapons and a hat with the KLA emblem. The Minister of Internal Affairs also came to Khorgosh today Bratislav Gasic.

A parallel operation was also carried out in Belgrade, and a total of 829 migrants were found and detained, the Ministry of the Interior announced. It is being investigated how the migrants got the weapons and what was the motive for the confrontation.

But the organizations that work on the problem of migrants say that the state's response in this case was too indiscriminate, because it was not migrants who were shot in Horgosh, but criminals involved in human trafficking.

Rados Djurovic, executive director of the Center for the Protection and Assistance of Asylum Seekers, in a statement about "DanasHe points out that the key message is that two groups of migrants did not participate in the clash, but two criminal groups of smugglers.

- We are not talking about migrants, murderers or terrorists. This was a conflict between people who are networked in criminal groups involved in human smuggling, which do not consist exclusively of migrants, says Djurovic.

Citizens of Morocco and Pakistan shot each other, unofficially learns "Blitz". Although the police said that there was only one wounded person, some residents of Horgosh claim that several migrants were wounded, and they heard that a total of ten were taken to hospitals. There is no official confirmation of such claims.

"They are everywhere." They come to the gas station in the village to charge their batteries, and one of them was very unpleasant and made a scene because he had no dinars, only euros. When the station worker told him that he could not accept euros, he went wild. I don't know what exactly happened last night, but I heard that Moroccans and Pakistanis clashed again. This is not the first time, and this will not be resolved now either. The police are doing their job, but they are coming. and so on. Even when the Hungarians go back, they don't give up, they live here for a while, and then they try to cross the border illegally. They don't bother me, there are good people among them, but we can't allow them to carry weapons and to shoot through the village," say the locals.

All illegal migrants will be transported to refugee centers in the south of Serbia, authorities said.

Residents of Horgosh reported hearing a series of gunshots around 18 p.m. Thursday night, after which footage emerged showing groups of young men armed with Kalashnikovs walking through the village and shooting at another group. A strong police force was sent to the village in the evening, and they found and arrested over 600 migrants, mainly from Arab countries and from Pakistan, Bangladesh and India, and only one wounded 20-year-old boy with two gunshot wounds in the chest was officially found.

VIDEO: Creepy scenes in Serbia – an armed group shoots in a village on the border with Hungary

VIDEO: Moscow accused the Ukrainian army of killing 14 people in an attack on a hospital

Kurti: I did not receive adequate arguments for the establishment of the Community of Serbian Municipalities

Problems in education, finances and assimilation affect all minorities from the Western Balkans