VIDEO | Jovanovski about Arsovska: Someone has a short mind and a long tongue 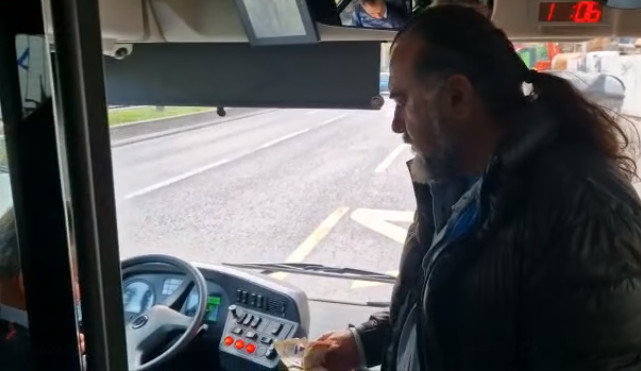 Lenin Jovanovski bought a JSP bus ticket and did not receive a fiscal receipt/Photo: Facebook/Screenshot

Once the mayor Danela Arsovska accused the private carriers of not having shown ticket sales for five years and not having fiscal devices, and because of that they committed a serious crime, they replied that it was a lie because in the vehicles of ""Sloboda Verosov" and "Makeskpress" tickets are not sold, but in the buses of JSP "Skopje".

The first man of "Sloboda Verosov", Lenin Jovanovski, went a step further and showed with a video recording what the sale of tickets in JSP buses looks like.

They say lies have short legs, but I say someone has a short mind and a long tongue. Video recording in a JSP bus in which there is no fiscal device, and the driver sold me a ticket for cash without issuing me a fiscal receipt. This thing is a practice in every JSP bus, where the drivers are forced by the JSP director to do this illegal selling just like this. And all the cats, what are we talking about? THE THIEF SHOUTED OUT LOUD HOLD THE THIEF !!! - Jovanovski wrote on Facebook, explaining the video.

The private carriers will meet with Arsovska tomorrow

Anti-corruption demands that the mayor of Chair, Visar Ganiu, be held criminally liable for abuse of office

Ministry of Interior: Reports of bombs in schools are false

Kostovski to Sali: Immediately remove the modular hospital from Butel Municipality and build a modern polyclinic

Reports of bombs in eight secondary schools in Skopje

With tapes and poles, PE "Streets and Roads" is trying to prevent parking at Porta Makedonija, now there is even more congestion there

The center is again looking for assistants for students with special educational needs, at the first call there were not enough interested

The first snow fell in parts of Butel and Gazi Baba, the municipal services are clearing the critical points