VIDEO | Ivan told his story a month after the rescue: A birthday present I will never forget 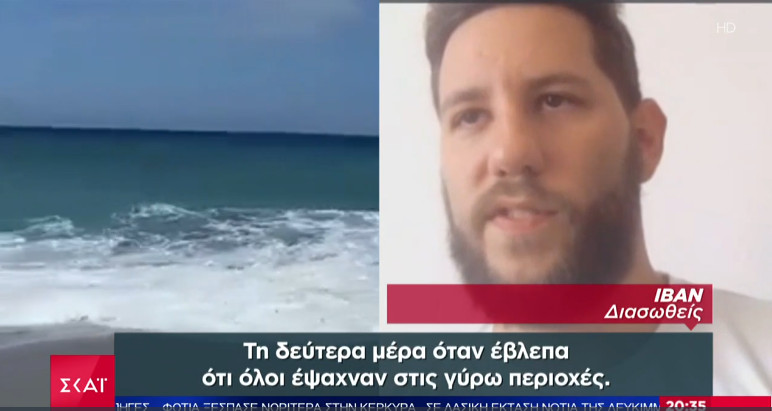 Ivan (30) from Skopje, who disappeared in the open sea from Mitti beach in Halkidiki last month with his friends, but was rescued after 20 hours by the Greek rescue services, told his shocking story of survival and rescue. his friend, 31-year-old Martin Jovanovski still has not been found despite the extensive and daily search in which, apart from the Greek services, were also involved volunteers and friends from Macedonia.

"The second day when I saw that everyone was searching in the surrounding areas. Then I realized that they probably won't find me," says Ivan, describing what he went through and what he thought during those difficult hours.

Ivan emerged victorious... After 20 hours at sea alone and helpless, the nightmare ended.

It was the worst birthday present, in terms of the horror he went through and which I described for the Greek TV station SKAI.

Ivan will never forget this birthday present. A month later, in a conversation with the journalist Christos Nicolaidis, he describes the time of terror, when the currents carried him from the beach of Miti to Poseidi in Halkidiki where he celebrated his birthday, 15 nautical miles away, south of Kassandra.

In those moments, his opponent is the cold and the dark. Ivan very characteristically describes the "smell of death" that is felt when there is no hope of rescue during the night.

"It's just like any other feeling, you just accept your fate, do what you can and concentrate on your survival," Ivan said.

All that until one ball changed his fate...

“Yes, I found a small ball, a child's ball. It was the second day, just a few hours after sunrise," says Ivan about the ball, which, although deflated, kept him alive while he was in the water for hours.

"I found the ball in the sea and swam to it and held it in my hands. She was a little deflated. It was disappointing."

But he did not give up, he continued to fight the waves, holding fast to the same ball that two brothers had lost in Lemnos 10 days earlier.

"Just a thank you, a real thank you to everyone who participated in my rescue regardless of their role," declares Ivan, recalling how he felt when he realized the helicopter flying above had spotted him.

Now Ivan is trying to forget what happened, but he will never stop, as he says, fighting his own battles, Greek television reported.

Shortly after his disappearance on July 9, his friend Vasil was pulled from the sea, and the search for Martin Jovanovski officially, by the Greek Coastal Service, OFKAT stopped ten days ago, but the friends do not give up and continue to search for him on the coast of Halkidiki.

The search for Martin ends in Halkidiki: the sea remains to bring him back