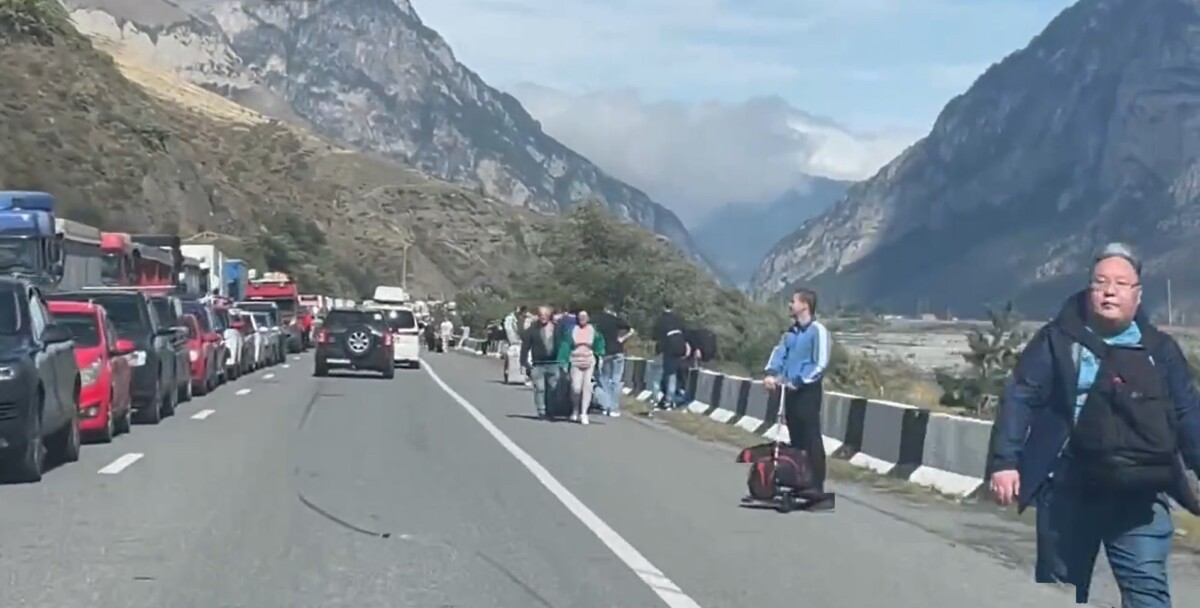 ИCold Russians are trying to leave their country for fear of being taken to the front. According to the Russian mMinistry of Defense should only be called officially 300.000 men who have no more than 55 years and who have already served military service. However, Russian media reports cases of older men and men with no military experience who also received a call for mobilization.

The newspaper "Novaya Gazeta Europe", who is critical of the government, even claims that the planned number of conscripts to be mobilized is significantly higher, up to one million. The cauldron of rumors and speculation has been boiling ever since. Kremlin denies. People are insecure.

It is in that context these days huge crowds at all border crossings leading from Russia, and according to the latest information, there is currently a 14 km long convoy of vehicles on the border with Georgia.

According to the reporter of BBC, Reyhan Demitri, the majority of men are in the ten kilometer long column between Georgia and Russia.

Demitri in his report which is transmitted by the regional media states that the column barely moves, so the wait to cross the border can be as long as 20 hours.

Traffic jam on the Russia-Georgia border is now 14 km, taking over 30 hours, as tens of thousands are fleeing to avoid Putin's mobilization. pic.twitter.com/KRzqQoPTPB

Besides Georgia, a large number of vehicles also passed through the border crossings between Finland and Russia.

Finnish official Meit Pitkaniti said the number of Russians arriving had more than doubled compared to the number who crossed the border over the past week.

The President of Finland and a ministerial committee yesterday proposed significant restrictions on the issuance of visas for Russian citizens and entry into the country.

Let's recall, although it was initially announced that 300.000 men who are in military reserves or have military experience will be recruited, on the first day after the announcement of the mobilization, the military police began to seize students as well as citizens who do not belong to the mentioned categories. Because of this, there is a general panic in Russia and citizens are trying to leave the country in every possible way, so almost all one-way flights from Russia are sold out, and ticket prices have risen sharply and now reach the sum of 10.000 euros.

So far, the EU does not understand Putin's threats with nuclear weapons?

Meanwhile, the EU's high representative for foreign policy and security, Josep Borrell, said that the European Union (EU) must take seriously Russian President Vladimir Putin's threats that he could use nuclear weapons in the conflict in Ukraine. Borel said this at a time when Russia is beginning a partial mobilization and is preparing to annex four Ukrainian districts where pro-Russian authorities are organizing referendums on joining Russia.

"Of course, this is a dangerous moment because the Russian military is backed into a corner, and Putin's reaction, that he will use nuclear weapons, is very bad," Borrell said.

In an address to the nation earlier this week, Putin said his country had "various destructive weapons" and would "use all available means at its disposal", adding that "it is not a bluff".

"When people say it's not a bluff, you have to take them seriously," Borrell said.

He dismissed concerns that EU arms stocks were low and said the Union must continue to provide military aid to Ukraine and economic sanctions against Russia, as well as diplomatic activity.

Putin is facing defeats on the battlefield, with Russian forces pushed back in the Ukrainian counteroffensive.

Putin's forces are in a bad position, analysts agree, but Borel said a "diplomatic solution" must be reached that preserves Ukraine's sovereignty and territorial integrity.

"Otherwise, we could end the war, but we won't have peace and we'll have another war," Borrell said.

He acknowledged that the rise in energy prices caused by the war was a concern. The EU's top official urged Putin to play his part in reaching a negotiated solution, adding that "it takes two to tango".

"Everyone who went to Moscow, to the Kremlin, to talk to Putin, came back with the same answer - I (Putin) have military goals and if I don't get those military goals, I will continue to fight. It is certainly a worrying trend, but we must continue to support Ukraine," Borrell said.