VIDEO: Big explosion in Crimea - since this morning, detonations have been echoing near the town of Jankoy 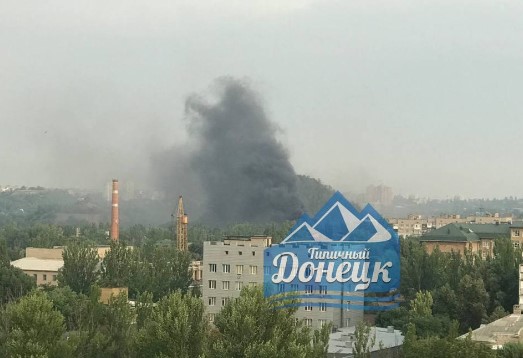 Reports and footage of explosions are coming in this morning from the occupied territories in the south and southeast of Ukraine.

Ukrainian television "Next" published unconfirmed footage of the explosion, allegedly from the town of Jankoy in the north of Crimea. Russia's RIA Novosti also reported that a substation in that city caught fire around 06:00 this morning local time.

According to local media reports, an ammunition depot also caught fire in the village of Majskoje, 25 kilometers southeast of Dzhankoje. Crimea's Russian administrative leader, Sergei Aksyonov, said he had rushed to Mayskoye to investigate the explosion at the substation. The cause of the explosion is still unknown.

Explosions in occupied #Donetsk are being reported. pic.twitter.com/eoPriFgQLI

About 2.000 residents have been evacuated from Majsko, and two civilians were slightly injured, the local authorities told RIA Novosti, adding that "the ammunition detonated in the former area of ​​the village farm where the military facility was temporarily located".

Anton Gerashchenko, an adviser to the Ukrainian president, posted on Twitter the alleged footage of explosions this morning in Crimea.

Explosions at the ammunition depot - media in the occupied Crimea pic.twitter.com/6zowH6H6Nw

Another large explosion rocked Crimea, the "Daily Mail" reports, adding that the fireball erupted in the ammunition warehouse.

Russia: Fire and detonation in a warehouse

The Russian Ministry of Defense announced that as a result of a fire in a military area near the village of Maysko in Crimea, the stored ammunition detonated
According to reports, the fire broke out in the ammunition warehouse, due to which the ammunition was activated, reports Interfax.

"According to the information from the scene, there are no serious injuries for now," said the Russian Ministry.

Measures are being taken to extinguish the fire and discover the causes of the fire.

Crimea was recently hit by explosions that caused a huge cloud of smoke near the airport at the Saki military base in Novofedorivka, killing one person and injuring 13 others, according to Russian authorities. Although Russian officials said it was not an attack, but an ammunition explosion, many doubt the official version of events.

Parts of Gostivar have been without electricity since yesterday

Petkov: The choice in Bulgaria is between a return to the past and a new Bulgaria

SDSM: Kovachevski is not part of the ownership of Pixel Group, VMRO-DPMNE is fabricating lies

A body was found in Vardar, it is being identified as the person from Kumanovo who drove off in a car