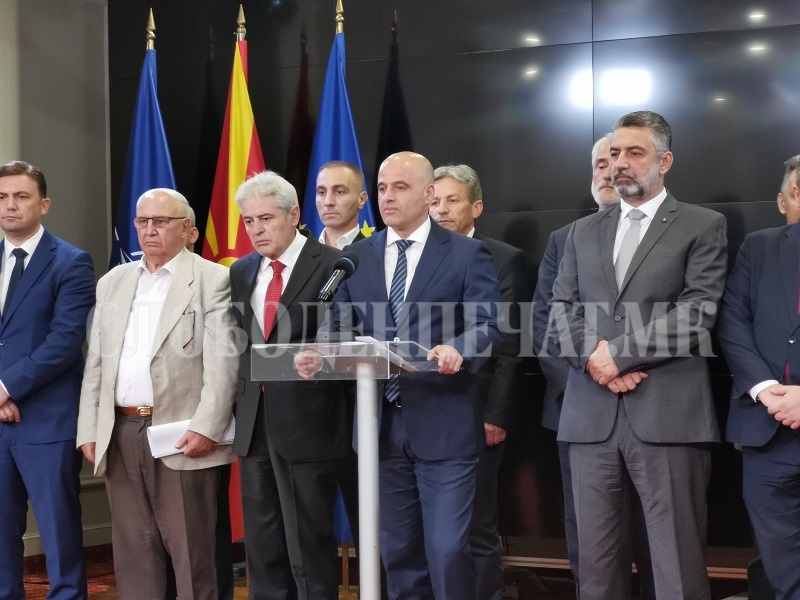 The Macedonian language in the negotiation framework is the Macedonian language. All identity issues are protected, which were actually our elementary demands that we adhered to in the negotiations. This is the prime minister in a nutshell Dimitar Kovacevski today, together with the government partners, he presented the position of the country after the arrival of the new French proposal at the address of the Government of ИLindenska no. 2.

At a press conference in the government, Prime Minister Kovacevski said that he is starting a process of broad consultations with the president, the assembly, the opposition, the non-governmental sector, the media and the expert public for the proposal that will unfreeze Macedonian European integration.

"All the false claims, in different forms, I think have sunk... In the European proposal, we have defined positions for a clear and unambiguous acceptance of the Macedonian language, as well as for the protocol not to be in the negotiation framework. Our position for the further initiation of the negotiation process unconditionally and holding a conference with the EU is also included in the proposal," Kovacevski said.

Deputy Prime Minister for European Affairs Bojan Maricic at today's press conference on journalistic questions, what is the procedure for the adoption of the negotiation framework in our domestic institutions and in which part of this proposal do we have a guarantee that these are the last requests from Sofia, he emphasized that the first thing that will follow is the process of reviewing the documents in a package .

Meanwhile, immediately after the meeting between Prime Minister Dimitar Kovacevski and the leaders of the parties from the government coalition, the Government published the French proposal on the official website.

According to Prime Minister Kovacevski, in the coming days, a broad consultation process will be opened, which will take place transparently, and the public will be informed in detail about all the next steps regarding the possible acceptance of the French proposal.

He Behaved Like a Monster, She Felt Like His Hostage: FBI Report Reveals Horrifying Details of Angelina and Brad's Relationship