VIDEO | Xhaferi for MIA: Tasoulas expresses readiness to invest in efforts to open negotiations with EU 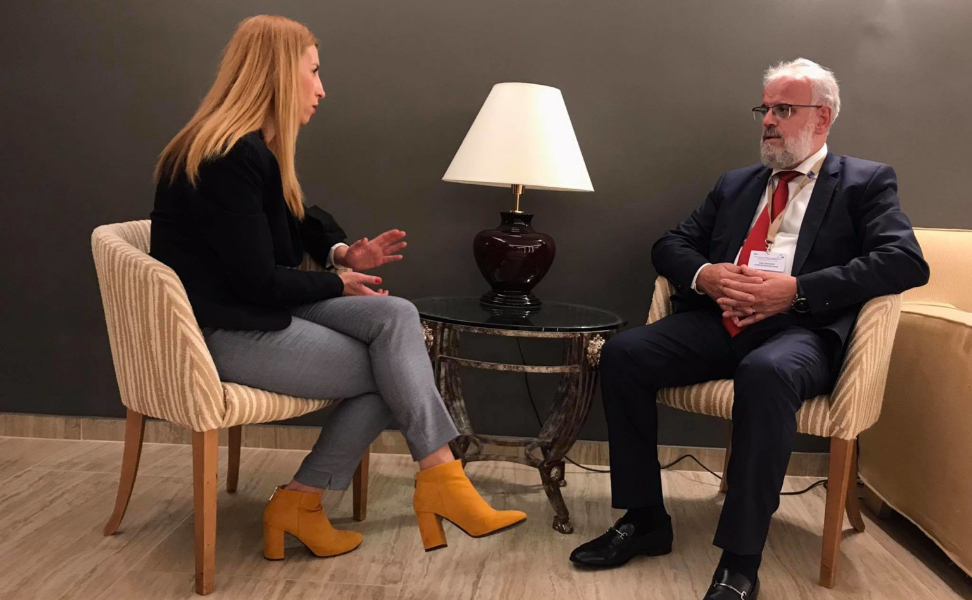 Regarding the meeting with the Speaker of the Greek Parliament, the open invitation for Tasoulas to visit Skopje and his response, the parliamentary groups for friendship between the two countries, but also the ratification of the three Memoranda in the Greek Parliament, the President of the Assembly of the Republic of North Macedonia Talat Xhaferi for MIA, after the meeting with his Greek counterpart Konstantinos Tasoulas in Athens.

The President of the Assembly commented that the meeting was "in the domain of a historic meeting", having in mind that in the previous three decades "at the level of Parliaments there was no official communication in terms of what is cooperation between the two Parliaments".

- The President of the Parliament expressed satisfaction with the way we cooperate and the way we strive to deepen that cooperation, and the readiness is to receive all the support, as we actually receive in the context of the European Union. In that context, the President expressed readiness to invest himself in those efforts in the European Union so that accession negotiations could be opened, Xhaferi revealed.

In a statement to MIA, he said that at the meeting with his Greek counterpart, he reiterated the open invitation for Tassoulas to pay an official visit to our country, adding that there is readiness from Athens, but everything will depend on the obligations.

- Of course the readiness is positive. Of course, as the engagement and obligations of the Parliaments will allow, it will be of special importance for the President of the Parliament to visit Northern Macedonia and to have the opportunity to address the Parliament directly and get the sense of what it means to establish relations as provide for the rules of diplomacy and correspondence between institutions, Xhaferi said.

To activate the parliamentary groups for friendship Northern Macedonia - Greece

The President of the Assembly explains that after the Prespa Agreement, "the Parliament of Northern Macedonia has realized the initial preconditions arising from the Agreement and in fact the second phase of implementation of the agreement in our country has begun."

- As a result, direct cooperation has been established between the institutions, both at the governmental and presidential level and in all segments of the cooperation with different intensity in communication. Initially at the level of the Parliaments, although in the last mandates in our country and here the friendship groups have been established, but unfortunately no direct meetings have been realized between them. "First the president of the friendship group changed here, then the pandemic and again a new president," Xhaferi said.

The Greek Parliament Speaker also referred to the friendship group in a statement to the media after the bilateral meeting with Xhaferi, saying that "they analyzed ways in which the two Parliaments could cooperate through the parliamentary friendship groups".

In March last year, the friendship group Northern Macedonia - Greece was formed in the Greek Parliament, and the same exists in our Parliament.

The Greek group has 22 members, including a president, a vice president and a secretary.

The speaker is New Democracy MP Marietta Janaku, who replaces George Vlahos after changes were made to the group's presidency. Vice President is Nikos Papas from SYRIZA, and the secretary is the MP from the Communist Party Ioannis Delis.

The remaining 19 members are 15 MPs from SYRIZA and four from New Democracy.

In a conversation with the MIA correspondent from Athens, the President of the Assembly revealed that at the meeting with Tasoulas he also raised the issue of ratification of the three Memoranda of Cooperation signed between the two countries, which arise from the Prespa Agreement.

- The President spoke positively in this regard, referring to the procedures that are understandable in the Parliaments and of course in the near future we expect that part of the formal aspect of what has been agreed to be implemented and can be practically implemented, although some of those agreements are implemented mutually, but they should also get the formal form through a procedure in the Parliament in order to get the full form of what is an international act that needs to be implemented and in force. "I am convinced that this will happen, given that the commitments and guarantees given by the president will be realized," Xhaferi explained.

The three Memoranda were adopted in the Parliament last September, and according to the procedures, the next step is to be reviewed by the competent committee for national security and foreign affairs, and after the members of the committee give the green light, the ratification will be at the session of the Parliament.

It is about the Memorandum for acceleration of the process of integration of Northern Macedonia in the EU; The Memorandum for the establishment of the Coordination Committee for Economic Cooperation and the Technical Agreement for the supervision of FIR Skopje arising from the Prespa Agreement.

The President of the Assembly of the Republic of Northern Macedonia yesterday and the day before yesterday in Athens participated in the two-day Conference of the Speakers of the Parliaments of the member states of the Council of Europe.

Yesterday, in his speech on "The common future of all European citizens", he said that "we, as a candidate country for EU membership and the other countries of the Western Balkans are involved in the debate on the future of Europe, in order to confirm our aspirations "for membership, to contribute to the advancement of the European project and to prove that our membership would further strengthen the Union."