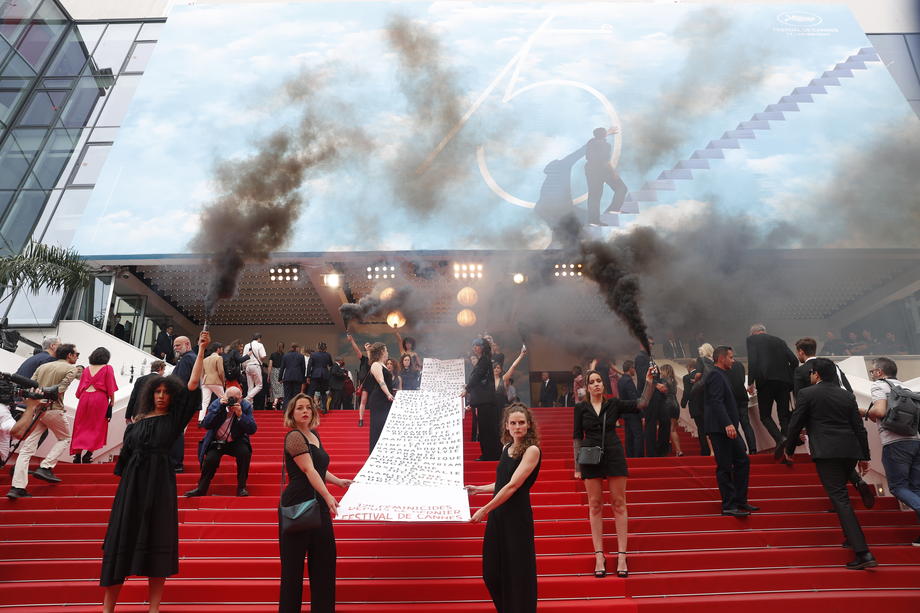 Members of the feminist movement "Les Colleuses" hold a giant banner with the names of 129 women who died as a result of domestic violence at the last Cannes Film Festival / Photo: EPA-EFE / SEBASTIEN NOGIER

On Sunday, May 22, a group of black-clad protesters appeared on the red carpet at Cannes Film Festival carrying a large banner with the names of 129 women who died as a result of domestic violence in France from the previous festival in 2021, reported by foreign media.

Protesters - members of the feminist collective known as "Les colleuses", also detonated black smoke bombs as they stood on the red carpet steps in front of the "Palais des Festivals".

It all happened at the premiere of the movie "Holy Spider", a crime thriller directed by Ali Abbasi, which tells the story of a journalist who investigates the ongoing killings of sex workers in Iran. The film is based on the real serial killer Said Hanai, who admitted to killing 16 women between 2000 and 2001. He was sentenced to death on April 8, 2002.

This is the second time at this year's 75th Cannes Film Festival that a protester has appeared on the red carpet to protest violence against women. On Friday, May 20, a woman ran topless on the red carpet with a "Stop raping us" message written on her body accusing Russian soldiers of raping during the invasion of Ukraine.