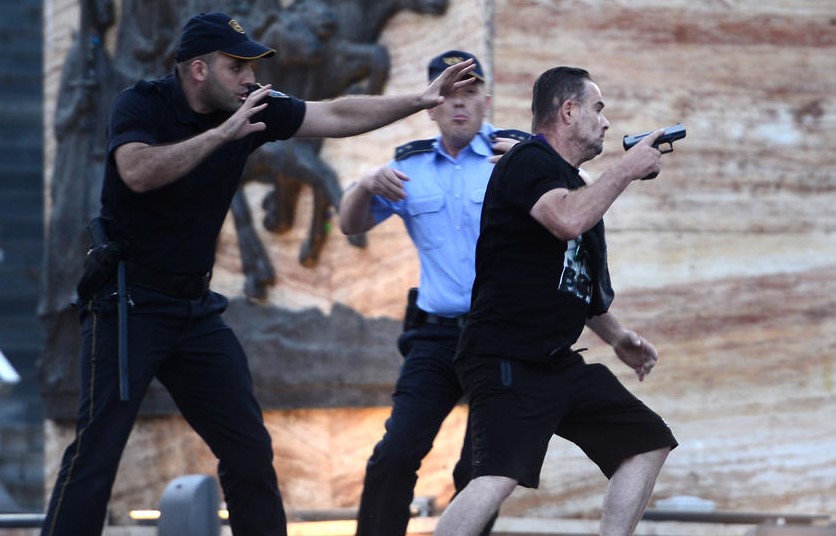 The man with a gun in his hand, who today caused an incident with the demonstrators at the protest against the French proposal, according to several allegations heard tonight, is an activist of the Alliance for Albanians (AA).

Several media reported that it was about Yusuf Enuzi, also known as Tsufi Koka, according to whose posts on Facebook, he is an activist of the Alliance for Albanians, a coalition partner of VMRO-DPMNE in the City of Skopje. his brother, Zudi Enuzi Coca, is the director of "Communal hygiene", appointed by the mayor Danela Arsovska.

The Ministry of Internal Affairs announced that the person who shot at Skanderbeg Square, with the initials E.J., was arrested.

Hristijan Mickoski today via Facebook claimed that that man wanted to kill him, and at tonight's press conference he said that the authorities wanted to cause an inter-ethnic incident. When asked about the political affiliation of the detainee, Mickoski said that he was not interested in whether or not he was a member of the Alliance for Albanians and asked "not to politicize the matter" and "to stay above politics".

The incident happened at the moment when the protesters against the French proposal were crossing the underpass near the "Mavrovka" shopping center. A group that was located near the "Skendeberg" square and the group of protesters on the boulevard first threw stones and bottles at each other. At that moment, Coca pulled out a gun and fired several bullets. The reaction of the police prevented a major incident.

It is currently unclear whether Mickoski was in the vicinity of the incident site at the time the incident occurred. According to the "Deutsche Welle" reporter, he had previously left the protest together with his security.