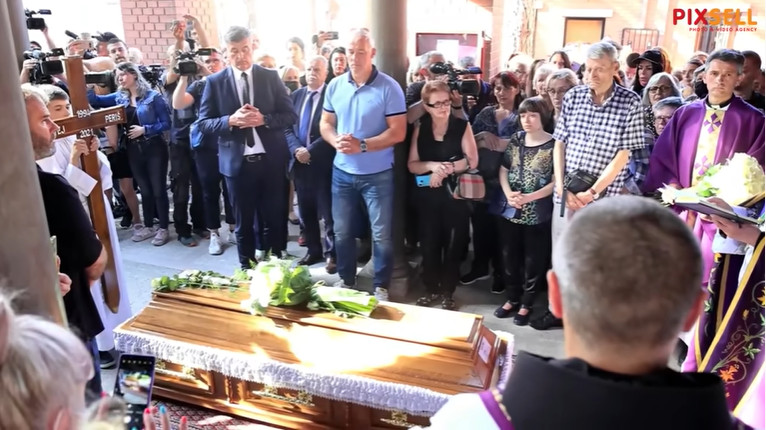 Mass and sending the remains of Matthew Parish to Belgrade / Photo: Screenshot / PIXSELL

The head of the Serbian Orthodox Church, Patriarch Porphyry, posted a photo on Instagram of Matej Paris, who was sent from Belgrade to be buried in Split, and an emotional message for the tragically killed young man.

Recall, Porphyry attended yesterday the sending of Matthew Parish after the Mass in the Church of St. Anthony in Belgrade led by Archbishop Stanislav Hocevar, and then posted this message on social media:

Life has no meaning if it is not eternal! I attended Matthew Parish's prayer service in Split. Archbishop Hocevar served. His father Nenad is an exceptional man, a brother, a Christian. I addressed him:

Is death the last word for us, or is death what Matthew's father, our brother Nenad, says? It hurts when a mother sends her son to the army, or the girl sends a boy to the army, when a month passes, not to see him for two days. Let us not talk when we send our son into the army of Christ, in eternity, and wait until we come with him to embrace and see.

"Dear brother, at the funeral of every person I say the sentence:" Christ, Lord, forgive the sins of the deceased and place him in a flower place from which every sorrow escapes. " Christ's resurrection reveals to us the secret of the truth that no one's life is meaningless if it is not eternal. We all know that the people around us are dying and we all act as if we are not going to die. Only when someone very close to us leaves this world do we begin to seriously focus on the secret of life. Is everyone dying except us or one thing is for sure, and that is that we will leave this world. "And then, through the point of departure, everything makes sense," Porphyry wrote.

The coffin with the remains of Matej Paris was handed over today in his hometown of Split, at the Lovrinac cemetery. The time of the funeral is still unknown. Today, Nenad Parish once again appealed to the journalists not to follow his son's funeral.

-Dear journalists and cameramen, thank you once again for your sympathy and proper follow-up of this case, but once again I ask you to refrain from any media attention for our Matthew's funeral and the funeral event due to extremely difficult moments for me and my family, "You will understand my request and thank you for that on my own behalf and on behalf of my family," said Nenad Parish.

Recall, the body of Matthew Parish was found on Tuesday, after a nearly five-month search, in the Danube near Ada Huja. The police suspected from the first moment that it was the young man from Split based on his clothes and personal belongings found on his body. The autopsy confirmed the black suspicions. The results of the toxicological analysis are now awaited, which should reveal whether Matthew somehow fell into a cold river on the fateful night because he was under the influence of alcohol or narcotics. According to the first results of the autopsy, Parish drowned.