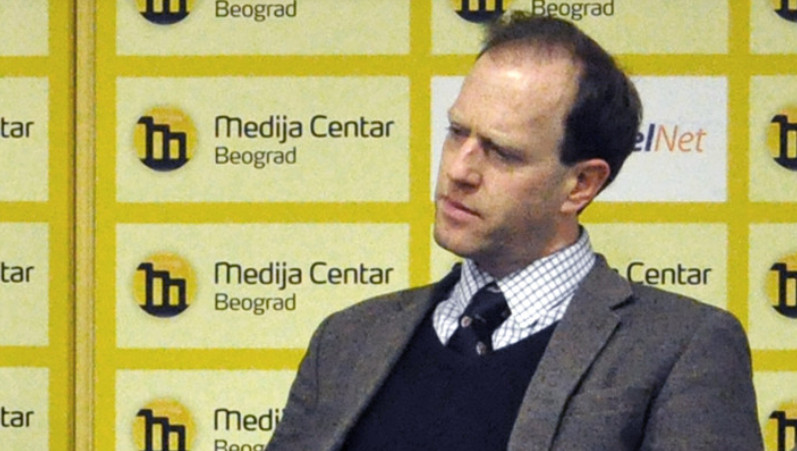 The recent escalation of tensions in Kosovo is another sign that Pristina authorities do not want any agreement with Belgrade through the Brussels dialogue, but are using force, especially before the local elections, to intimidate Serbs living in northern Kosovo and show them that it control the area, says Timothy Les, Cambridge University Demostat associate.

Les does not rule out the possibility of sKosovo Albanians, as well as the Serbian army, to try to establish control over the North of Kosovo in the foreseeable future.

It should be recalled, Les said, that the "trigger" for the riots was a Kosovo police operation in the Serb-majority areas of northern Kosovo on October 13, in which police broke into pharmacies, shops, warehouses and other facilities, explaining that fight against smuggling.

At that time, sirens were heard in the northern part of Kosovska Mitrovica, citizens gathered in the streets, and the police used shock bombs. Serb Srecko Sofronijevic was seriously wounded by a firearm in Zvecan, due to which he underwent surgery, and several other people were injured.

Timothy Les, a Demostat fellow at Cambridge University, said he did not know what would happen in the future, adding that "there is a sense that Kosovo's two-decade-old drama is moving towards its long-awaited moment of truth".

"This week's events are a serious escalation - one person is injured and some are injured, causing shock and anger among Serbs. This shows that the Albanians are no longer ready to accept the political status quo, if that means extending the autonomy of the North. Recent events also show that Albanians are ready to use force to assert that they also rule the North, after years of unsuccessful attempts to achieve such a goal through negotiations. "Of course, this excludes the possibility of reaching a negotiated solution," Les said.

Les points out that The next stage in resolving Kosovo's status is likely to be defined by force, "first by Pristina and then by Serbia, so that Serbia will annex the North with the help of the army."

"It will be a dramatic development of the situation, but it is logical that this is the only scenario that remains if the Albanians do not want the status quo or the formation of an Association of Serb Municipalities, and Serbia has rejected the idea of ​​integrating the North with the rest of Kosovo." The leadership in Belgrade is threatening that. "I guess trying to assert his sovereignty even though he faces warnings from a stronger opponent."

Les is convinced that Pristina hopes to have US support. He warns that it would be a big mistake if Serbia reacted too much and crossed the Ibar River. Washington does not want to face Belgrade militarily, especially given the fact that the Europeans refuse to do so and Russia supports Serbia. Les added that this was clear and based on the events of two weeks ago (a crisis caused by the reciprocity of license plates), when the United States practically capitulated to the demands of the Serbs to maintain the status quo after the demonstrations of military force.

"If Serbia, on the other hand, decides to occupy the North, it will turn out that it is possible to do so without serious consequences." "This will create two new facts on the ground that Belgrade controls the North and Pristina controls the south, which has always been the safest scenario for Kosovo, given the demographic data." says a Demostat associate at the University of Cambridge

This will also change the debate on Kosovo's future. The status of Serbs in the south will begin to be considered in Kosovo itself, which will undoubtedly link Serbia to the status of Albanians in the Presevo Valley. claims Timothy Les.

Les believes the issue of Kosovo's future is likely to take on a broader dimension, "because "The crisis is growing in parallel in Bosnia, where Serbs are striving for the final disintegration of the state, and these two dramas will surely be linked."

"It is difficult to predict the details, but the bigger picture will be clear. There are two disputed but de facto independent territories on the borders of Serbia, one of which wants to be part of Serbia and the other does not want to. In any case, the final outcome will be an exchange of territories between the two sides. The other dimension is Albania, where Edi Rama reiterated his desire for that country to unite with Kosovo. However, I repeat, it is difficult to predict the details. "In any case, if Serbia threatens Kosovo and external instigators do not support Kosovo, it is almost certain that Kosovo will move closer to Albania in order to gain support and security, which will make reunification even more secure." Les.

Protests in Serbia: Thousands block roads due to lithium mine

Vuќi, remains SNS chairman until elections, but refuses to be the party's sole candidate for president

Djukanovic: Montenegro has never been in doubt about EU integration

Lajcak: Western Balkans' EU integration has no alternative, but Union dissatisfied with Balkans

Kovacevski: Within seven days I will prepare a program and run for president of SDSM

Young people think it is "cool" not to be vaccinated, says Serbian epidemiologist Kon