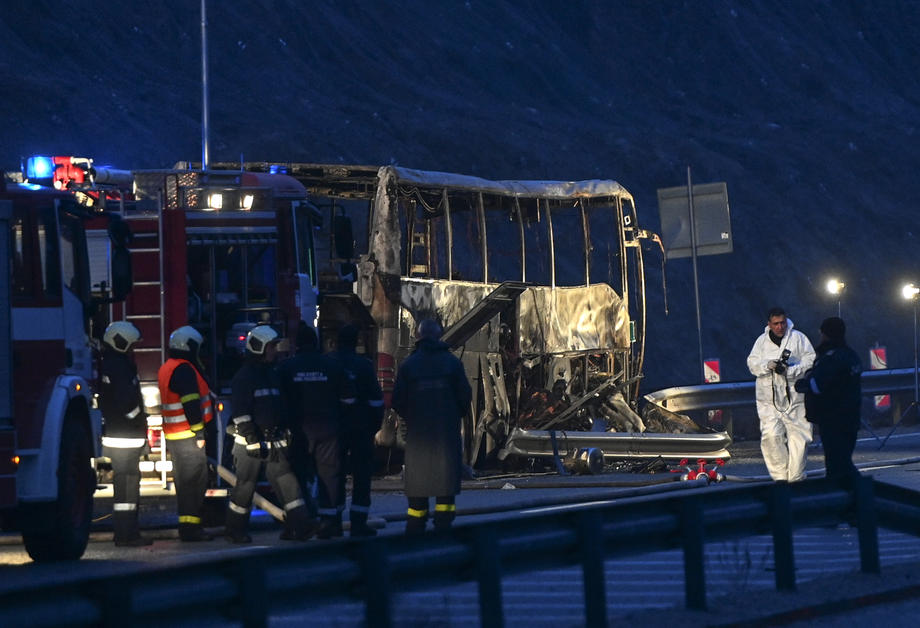 At least 45 people died in a car accident on the "Struma" highway in Bulgaria, when a bus with Macedonian license plates traveling from Istanbul to Skopje caught fire.

According to initial information, there are survivors in the accident.

The bus entered Bulgaria from Turkey through BCP "Kapitan Andreevo" shortly after 21 pm, and the accident happened around 02 am on the highway "Struma" in the direction Sofia - Blagoevgrad.

As the head of the Fire Service Nikolay Nikolov told the Bulgarian media, 53 people were traveling in the bus. Forty-five died and the rest were taken to hospital. The bus was set on fire, and firefighters and medical teams are still at the scene.

The traffic in both directions of the highway is interrupted.

The Prime Minister Zoran Zaev expressed his condolences for the victims, who was informed about the accident by the Bulgarian Prime Minister Stefan Janev.

Zaev expresses condolences for those killed in the accident, leaves for Bulgaria to visit the survivors

The Prime Minister Zoran Zaev expressed his condolences for the victims of the car accident that happened last night on the highway "Struma" in Bulgaria, in which according to initial information at least 45 people lost their lives.

In a statement for BNT, Zaev said that he was informed about the accident by Bulgarian President Rumen Radev and Prime Minister Stefan Janev, MIA reports.

Zaev said that he was leaving for Bulgaria immediately, and competent teams from Northern Macedonia were sent there.

It is an accident on a bus with Macedonian registration. There were 53 passengers in it, 45 of whom lost their lives, several survived and were taken to the hospital in Pernik.

- We do not know if they are Macedonian citizens, but we assume that they are Macedonians. I informed the Macedonian services to prepare our teams and to arrive on the spot. I am going to Bulgaria to visit people in the hospital. It is tragic that there are children among the victims. We will be very grateful to the Bulgarian authorities if they discover the reasons for the incident and share them with Northern Macedonia. Surely the citizens of Bulgaria and Northern Macedonia will want to know what happened. We know this is a big fire and that people died because of it, but whether it broke out in a car accident or before or because of the accident, experts will say. Great tragedy, great is our pain and sympathy to the families of the victims. May God rest their souls and pray for the good health of the survivors. Initial information is that they were returning from a trip from Istanbul, said Zaev.

Kovacevski-Dudzak meeting: UN programs are strong support for our policies

VIDEO: A rock weighing 20 tons threatens to fall into the Matka dam

The authorities are clearing the streets of snow in Ohrid

BEWARE OF WHO YOU OPEN THE DOOR: A fake Red Cross volunteer collects money in Aerodrom

Drastic increase of outpatient examinations in the covid center in Tetovo

What she does today: Maja Kikiritkova, fashion designer

The Kremlin's claims are baseless