SOC tomorrow with a decision for MOC-OA 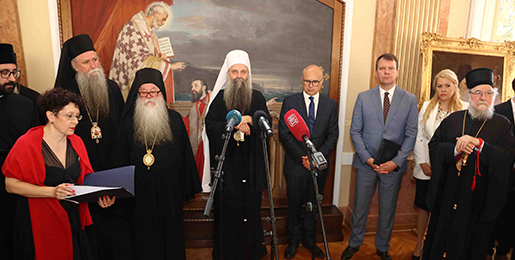 The central celebration on the occasion of the centenary of the establishment of the Serbian Patriarchate was held today in Sremski Karlovci.

The solemn morning liturgy was followed by a session of the Assembly of the Serbian Orthodox Church, and the working part should continue tomorrow in Belgrade, after which it is expected to be announced how far it has come in talks with the Macedonian Orthodox Church - Ohrid Archbishopric.

Serbian media, citing unofficial sources, write that the SOC will confirm the decision of Ecumenical Patriarch Bartholomew, who on May 9 recognized the church hierarchy led by Archbishop Stefan as canonical and valid in the Orthodox world and establishes a canonical and social liturgy.

According to the Serbian Kurir, citing sources from the Serbian Orthodox Church, the decision for recognition should have been made soon, because it had already been negotiated in recent months at the level of the leaders of the two churches, and even earlier this month in Nis, and that that would resolve the 55-year-old dispute.

Prof. Kolozova on the French proposal: Europe negotiates with itself as if negotiating with us

Mickoski claims that the price of electricity will increase by 18 percent, announces protests

Kalevska-Vanceva: I was filmed by Jovancev from VMRO-DPMNE, I will ask him to apologize to me

Dimitrov: The French proposal rewards Bulgaria for the veto