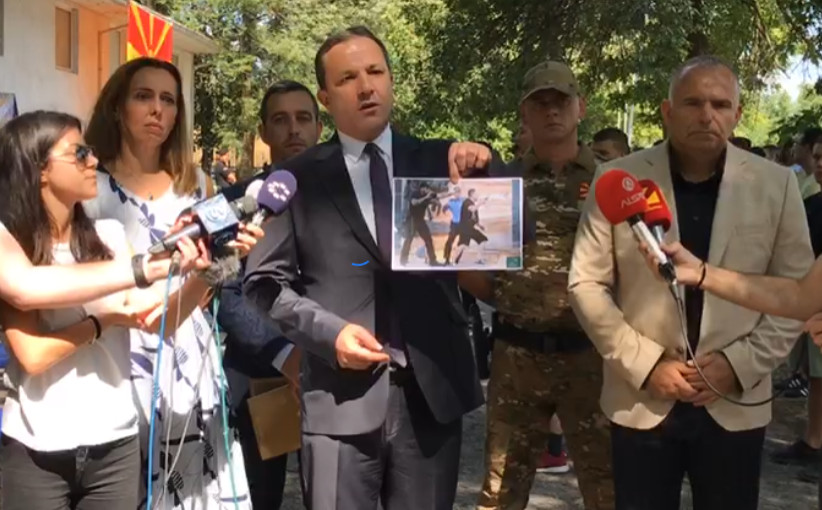 The Minister of Internal Affairs, Oliver Spasovski, believes that there was enough police presence at yesterday's protests to prevent a larger-scale incident, after yesterday at the Skanderbeg monument, in the confrontation with stones and bottles between the demonstrators from "Ultimatum, no thanks" and a group of Albanians from the Bazaar, one one of them, later identified as the brother of the director of Skopje's "Communal Hygiene", pointed a gun at the protesting crowd and fired into the air. The police arrested him on the spot.

The police prevented the incidents with a larger number of police officers. See the videos that were published by the media. I'll show you a picture, isn't this intervention on the spot? Yes, it should not come to this of course. In order for this not to happen, every single citizen must know that peaceful protests must be. No one is allowed to draw firearms and endanger safety. To no citizen in the country. Please don't justify pulling a weapon in public. There absolutely could have been bigger consequences. That's why I appeal to the citizens and to the political entities and all those who participate in the protests to be peaceful protests. Vandalism and violence will not give results in any case, Spasovski is decisive.

When asked directly if he would resign for the police's failures during the violent protests, he repeated that everything was secured by the police.

I have already answered this question, there were enough services and police officers there and they did not allow any incident to happen. There were enough police officers. We did not say that there was no incident. We prevented a major incident. If there had been no police, there would have been no arrests and no reaction from the police, the minister emphasized and added that responsibility cannot be demanded from those who prevent an incident from happening.

Operational knowledge of possible incidents, according to him, is everywhere where Protestants move or stay.

Based on all the plans and estimates that were made, there was no incident allowed to happen there. No one could have expected what happened to happen. No one expected the day before yesterday that what happened would happen in front of an assembly, that 47 policemen would be injured. We added incident announcements from the operational insights we had. He who threw a Molotov cocktail at the assembly has already been arrested, the minister said

"It is about J.S. (18) from Skopje, who was identified from the video and who confessed to the crime," Spasovski then announced on Facebook.

That there was sufficient police presence at the protest, confirmed the director of BJB Sasho Tasevski.

We have enough police officers. The case, which was violent, was stopped by the police. The previous day you said the incident was not reported to the police station. The headquarters will make a security assessment and if it assesses there will be enough security tonight as well, he said.

Regarding the alarm that Mickoski raised last night that threats were made against him with a gun, Spasovski stressed:

So far, we have not reported threats against Hristijan Mickoski in any police station. There were moments in a period before when he himself asked for an assessment to be made in the area of ​​security. Security was granted to him and when that need ended - no more. At any moment he can report if there is a security threat. There is no information at this moment that someone wants to take the life of anyone, Spasovski is decisive.

Will the protests escalate into greater inter-ethnic tensions, as the Minister of Foreign Affairs Bujar Osmani announced on Saturday, if the French proposal is not accepted, Spasovski said that the police will continue to carry out security assessments, but it is up to the politicians to pay attention to every publicly spoken word about to prevent incidents and violence.

We work daily in this area with the security services. Of course, each of us should be careful in making public statements in public because all of this can cause certain problems. However, the security services must be up to the task in order to be able to prevent and possibly prevent any events that would be a security risk, Spasovski decided.

The security services will make assessments for tonight's announced protest in front of the Government, the Ministry of Foreign Affairs and the Parliament, so it will be decided what the schedule of the police officers will be.

The Ministry of Internal Affairs, in a press release of the Minister from the Training Center in Idrizovo, emphasized that for the incidents in front of the Assembly on Tuesday, four more people were additionally arrested, that is, a total of 15 with the 11 of the same evening. Three of them are minors.

All of them were arrested in connection with the crime of "participation in a crowd that will commit a crime", according to Art. 385 of the Criminal Code, committed on 05.07.2022/47/XNUMX during a civil gathering in front of the RSM Assembly, during which XNUMX police officers were injured.

Police officers from the Violent Crime Unit, after taking measures and actions, filed criminal charges against 12 people in a fast-track procedure.

During the incidents on Tuesday, the RSM Assembly building, the Government building, the Ministry of Foreign Affairs, as well as a police house, a police vehicle and various types of police equipment were damaged.