The salt that is thrown on the streets has an effect up to minus 7 degrees, hail is possible 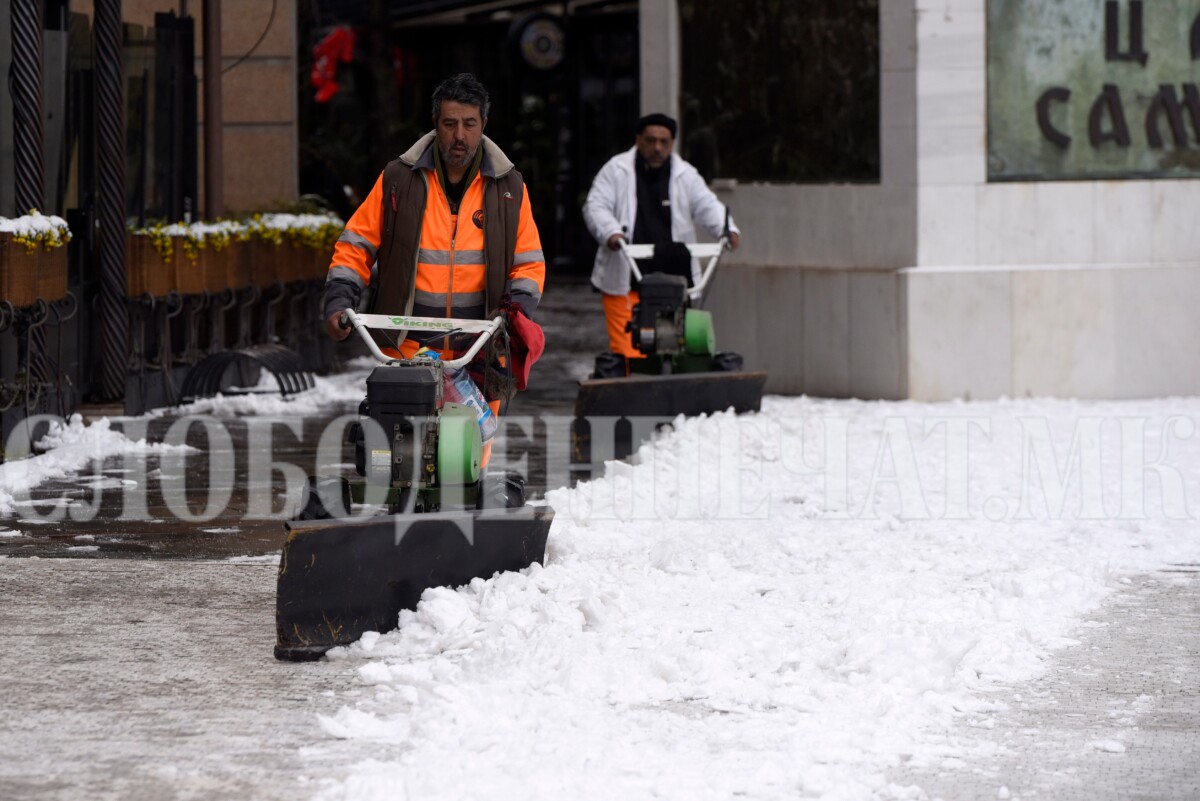 The winter services of the City of Skopje, all Skopje municipalities and the employees of the public enterprises got involved in clearing the snow drifts.

The snow which "covered" the capital alerted the city and municipal authorities, as well as public companies, to timely intervene with the machinery at their disposal, by scattering salt on the roads, but also by hiring workers for faster, easier and more efficient clearing of snow.

As they inform city ​​authorities, the winter service crews were constantly on the field yesterday and during the night, cleaning the boulevards and streets under the jurisdiction of the City, and 300 tons of industrial salt were thrown.

The cleaning of the roads and sidewalks is performed by the teams of the public enterprise "Streets and Roads", the mechanization of the remaining public city enterprises is also available. In addition to cleaning the roads, the teams of other city public enterprises are also active, intervening with people and mechanization in cleaning public areas, clearing fallen trees and gutters - informs the City of Skopje, where they recommend drivers to drive carefully and adhere to road conditions.

The City of Skopje reminded that the industrial salt used to melt ice and snow has an effect of minus 7 degrees Celsius and warned that due to low temperatures, hail may appear on the road.

И winter services of all Skopje municipalities got involved in clearing the snow.

Municipality of Aerodrom cleared snow from streets, sidewalks, bike paths and other areas under its jurisdiction.

During the first rains, their own snow removal vehicles were immediately made available, and for that purpose about 200 tons of salt were procured, which is used to prevent icing. A crisis headquarters has also been activated, which is directly managed by the Mayor Timcho Mucunski - inform from the Municipality of Aerodrom.

Hence, they remind the residents and legal entities that according to the Law on Public Cleanliness, they have a legal obligation to clean the snow in front of the entrances of their homes and buildings, which will ensure unimpeded access to them.

From Municipality of Kisela Voda informed that in addition to clearing the snow with mechanization and throwing salt on the frozen surfaces, in order to meet the needs of their residents, they also opened a contact telephone number, for easier solution of the problems related to the new situation.

- The services of the Municipality are available 24 hours for the citizens who needed additional intervention for clearing the accumulated snow. Contact can be made on the phone number 075 / 309-548 (Dalibor), at [email protected] or on the Facebook page of the Municipality of Kisela Voda - say from the municipality.

From Municipality of Gazi Baba, on the other hand, informed that no settlement was cut off from traffic due to the snow drifts.

- In the settlement of Creshevo we opened a mobile point where quantities of salt were delivered. The first phase of the cleaning, which includes the main streets in Zelezara, Avtokomanda, Cento, Stajkovci, Cresevo, Viniche, Smilkovci, Bulachani, Rastak, Strachinci and Brnjarci, has been completed, and now the second phase begins, in which the larger local streets will be cleaned. the Mayor of the Municipality of Gazi Baba, Boban Stefkovski.

The winter service of Municipality of Centar threw 44 tons of salt on the streets. As informed by this Skopje municipality, their teams are constantly on the field and clear the snow on the streets, sidewalks and public areas in the municipality. Hence, they say that special attention is paid to the critical places, at the foot of the mountain Vodno.

Five special vehicles for clearing snow are cleaning the roads, public areas, sidewalks, bicycle and pedestrian paths, and 44 tons of salt have been thrown on the streets to prevent the road from freezing. All streets on the territory of the municipality are being cleaned, and the municipality is in constant communication with the citizens, in order to act in a timely and efficient manner on the field - said the Center and informed the residents to report snow on the phone number 076 381 673.

In Municipality of Karpos in addition to clearing the streets, they emphasized the so-called "Critical points".

Intervention was made at the key "critical points" in the municipality, in the so-called "high zone" in the settlements Zdanec, Trnodol, Nerezi, on the bridge near Bardovci and on Lovqenska Street. At the moment, intervention is being made on Lerinska and Zagrepska streets next to the Institute for Lung Diseases Kozle. So far no traffic jams and problems have been registered. During the night and in the early morning hours, communal inspectors from the municipality were hired, who monitored the situation on the ground - informed the Municipality of Karpos.

Intensive snow clearing was also observed in other Skopje municipalities.

The teams of  PE "Water and Sewerage" they were constantly on the ground cleaning the gutters and manholes throughout the city so that the system would be ready to receive water after the snow melted.

PE "Communal Hygiene" in coordination with the City of Skopje was also on the ground.

The teams of the company are also cleaning the central city area, the square and the street Makedonija, the smaller squares Filip Vtori, Mother Teresa and Bogorodica, as well as the Old Bazaar. The area around the City Hospital, the State Hospital, the Government and the Parliament of the Republic of Macedonia is being cleaned, and the pedestrian paths and sidewalks on the bridges "Goce Delchev" and "Sloboda", as well as the pedestrian bridges in the central city area are being continuously salted to enable safe and passable pedestrian movement - say from the company.

When it comes to protecting the greenery and trees in the city, teams from PE "Parks and Greenery".

Intensively clean and loosen the heavy branches from the snow, in order to avoid breaking and damaging the young seedlings and bushes. Pedestrian paths in the parks are also being cleared - informs this public enterprise.

"On Wheels": Authorities to clean pedestrian and bicycle paths such as roads

The snow that fell in Skopje made the movement of pedestrians and cyclists more difficult due to the untimely cleaning of the paths in several locations in the capital.

When we look at cleared roads and snow and pedestrian paths, we wonder which means of transportation the city authorities favor? Especially when it is seen that the pedestrian islands are not cleaned in a location where pedestrians and cyclists suffer every day due to car drivers who do not respect the pedestrian crossing and the traffic light. By leaving the snow on the tracks, the movement of the vulnerable participants in the traffic is made more difficult and the chances of being hit by the motor vehicles increase - say from "On Wheels".

Cyclists say they expect city and municipal authorities to clean pedestrian and bicycle paths as diligently as they do pavements.

The carousels are spinning on private property in front of SC "Boris Trajkovski", the City and the Municipality of Karpos were not authorized for a permit

Shilegov told Arsovska: There is no mayor from "Ali Express"

Dracevo, Pintija, Usje and the surrounding area for two days without water, the citizens are supplied with cisterns