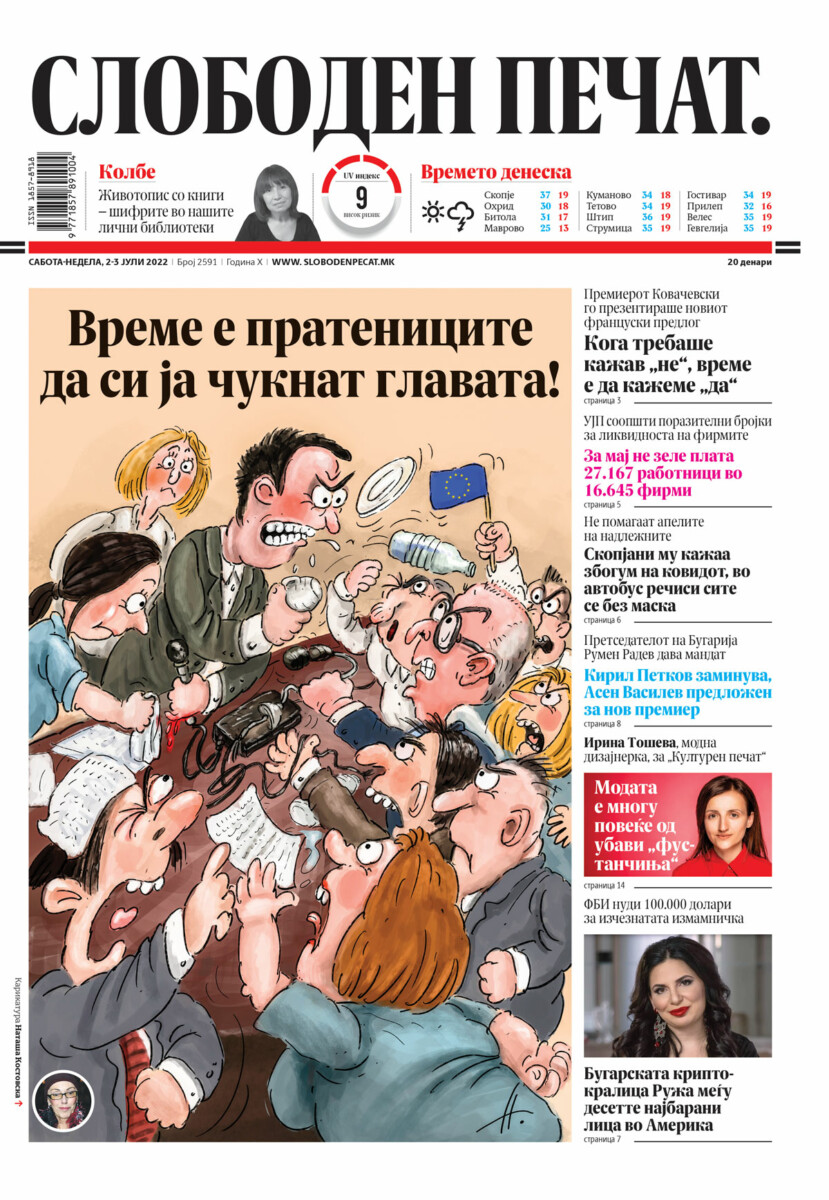 The leader of VMRO-DPMNE called the proposal an ultimatum for the future of Macedonia: Mickoski said "no" and called for a nationwide protest

- For such a proposal, the answer is no, thank you. The proposal is the same one that has already been rejected once and contains all the Bulgarian demands. Acceptance means accepting the requests of Bulgaria to change our textbooks, that the Macedonian language is a dialect of the Bulgarian language. If Kovacevski and Maricic say otherwise, I tell you that they are lying, said Mickoski.

Dejan Trajkovski, professor at the University of Bitola: And after 20 deaths a day from the "harmless" omicron?

- What will happen to the dying if we reach 1.000 new cases per day at a 2% mortality rate? - Trajkovski asks

PRO announced devastating figures for the liquidity of companies: For May, 27.167 workers in 16.645 companies were not paid

PN: According to the estimates of Angel Dimitrov from the Organization of Employers, the number of companies that will not be able to pay salaries will increase

The appeals of the authorities do not help: The people of Skopje said goodbye to the covid, almost everyone on the bus is without a mask

The FBI is offering $ 100.000 for the missing fraudster: Bulgarian cryptocurrency Ruza is among the ten most wanted people in America

- FBI requests any information about Ignatova, but warns that she is probably walking with an armed escort

The President of BFRSM Dejan Bogdanov is optimistic: To have at least two wrestlers at the 2024 Olympics

- Surrounded by the medals of Egorov and Nurov from the Mediterranean Games, but also with some of our previous successes in this sport, the first man of Macedonian wrestling predicts that the upward line will continue in the next big matches

- The need to denigrate Sandanski, as a hundred years ago, so today, is in his views not to accept the Bulgarian interference in Macedonian affairs and not to reduce the Macedonian struggle to a struggle that should ultimately lead to the unification of the "divided" Bulgarian brothers from Bulgaria and Macedonia.

A former prisoner told Epstein's seducer: The prisoners are getting ready, they will beat you to death in prison

- Jacqueline Polverari warned Gislene Maxwell that the prisoners were already preparing for her arrival and that her stay "would not be a picnic".

The regular article "Cultural Press" will be published tomorrow

Report from Bitola Shakespeare Theater: Shakespeare's work as an incentive for a theater holiday

- The successful realization of the eighth edition of "Bitola Shakespeare Festival" from June 25 to 30 confirmed that the organizers of the Bitola National Theater have already gained experience in dealing with crises of any type.

- Irina Tosheva celebrated her jubilee 10 years of active work and design with a very unusual fashion show, and the crown of many months of work was the presentation of the collection "Oya" on the plateau in front of "Villa Vodno"