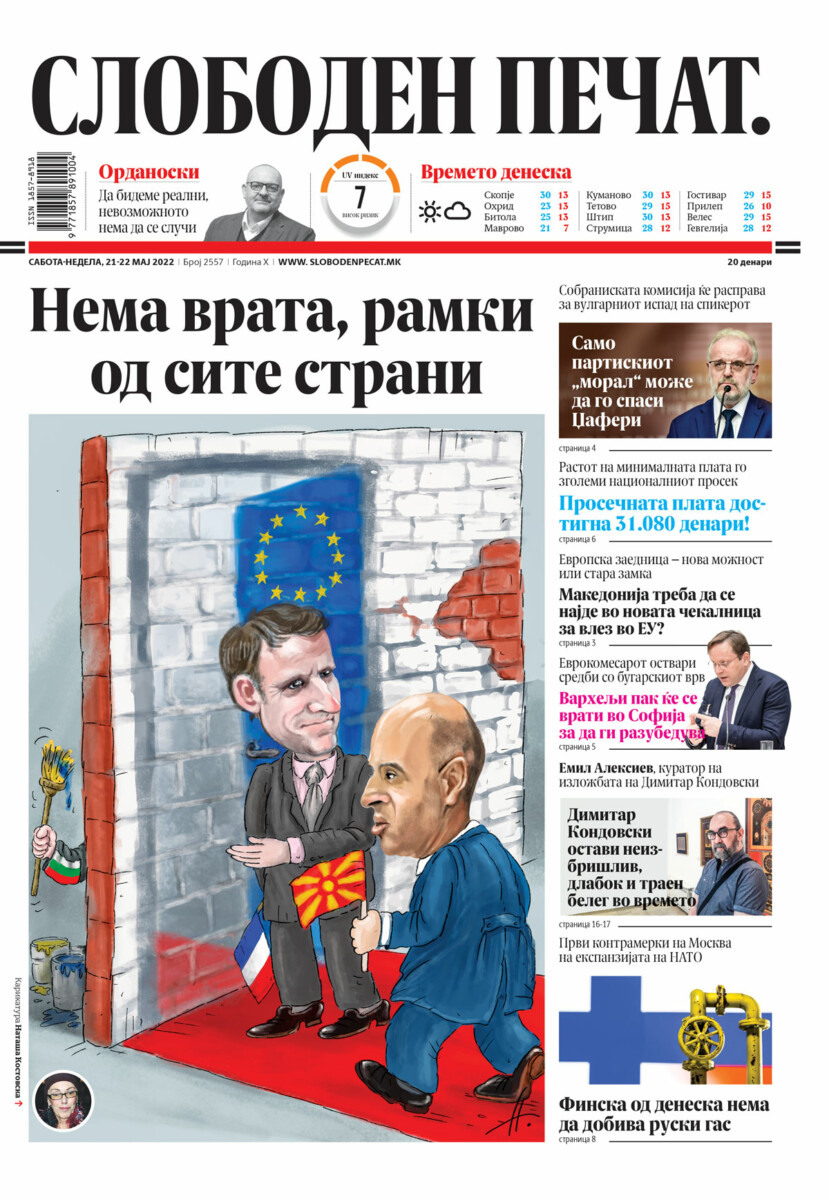 In the rich printed weekend edition of "Free Press" you can read:

European Community - new opportunity or old trap: Macedonia should be in the new waiting room for the EU?

- Chance Macedonia should not ignore the idea of ​​French President Macron to form a "European Geopolitical Community", which is a complement, not an alternative to the EU accession process, according to domestic experts.

The European Commissioner met with the Bulgarian leadership: Varhelji will return to Sofia again to reassure them

"We are working on a mutually acceptable solution so that we can start negotiations with RS Macedonia and Albania by holding an intergovernmental conference in June," EU Enlargement and Neighborhood Policy Commissioner Oliver Varhelji wrote on Twitter after meetings with Radev, Petkov and Genchovska.

A drastic jump in the price of cellulose, packaging, transport, electricity and gas, are the input components that have significantly increased the prices of toilet paper

Consequences of the Ukraine war and huge debts: Sri Lanka runs out of money, fuel and food: We will starve to death!

It's pointless to tell you how hard life is. I do not know how we will last two months. "We will probably not be here at this time," a Colombo saleswoman told Reuters.

Citizens were outraged by the fact that the removal of the defect took so long and on social networks appealed to launch more cisterns because, according to them, those who were already circling the neighborhoods were few.

The preparations of the volleyball team of Macedonia are coming to an end:

Pavlicevic: Volleyball players will play their best when it is most needed

- The volleyball players are doing the last trainings before the performance in the European Silver League. In the only two controls, Macedonia achieved a half result, victory and defeat against Albania.

Interview with Biljana Klekackoska, resurrection of filigree:  What is it that makes a caveman from 75.000 years ago adorn himself?

My challenge is to always play, to re-examine, to discover new faces or, say, new facets of a gem.

Interview with Emil Aleksiev, curator of the exhibition of the artist Dimitar Kondovski

Kondovski left an indelible, deep and lasting mark in time

Conversation with Tina Ivanov, director of the Philharmonic

Seir with his feet in a basin