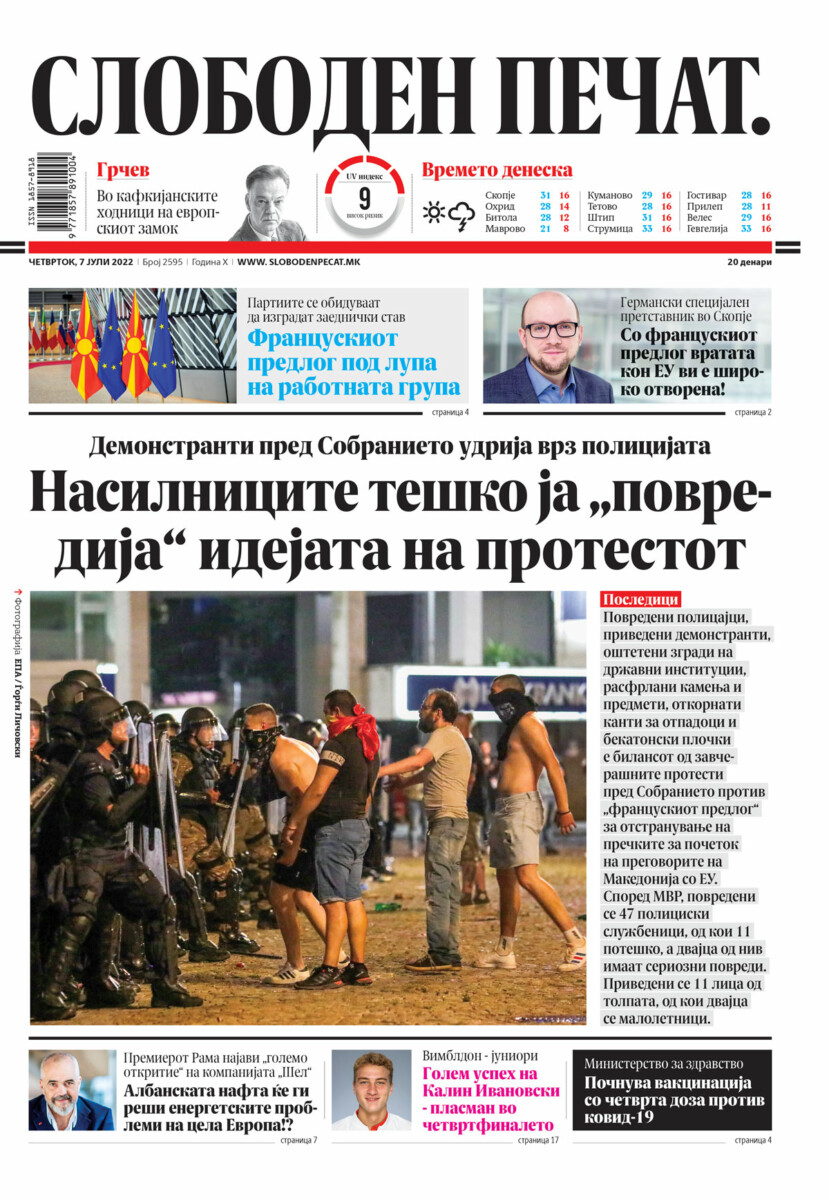 The demonstrators hit the policemen: Violencethe nits seriously "hurt" the idea of ​​the protest

- The incidents were preceded by the protest against the "French proposal" for "preserving identity and language" which started in front of the Government, continued in front of the Ministry of Foreign Affairs and ended in front of the Parliament. A hundred young protesters, including those with hoods on their heads, tore down the fence and started throwing stones at the parliament building, and pyrotechnics, as well as a Molotov cocktail, were thrown at the police.

The meeting of the working group began in the Club of Deputies: The French proposal under the scrutiny of the parliamentary parties

- Identity issues and the Macedonian language are already protected and are not part of the French proposal, SDSM believes. The opposition VMRO-DPMNE and the trio of smaller ruling parties DS, DOM and LDP with specific requests to change the negotiation framework precisely in the area of ​​language and identity issues.

The supplemented rebalancing of the budget is returned to the Parliament: The liquidity of the ESM will be defended with a 100 million euro loan

- A bill has been submitted to the Parliament that should be adopted after a shortened procedure for a loan of 100 million euros to maintain the liquidity of the ESM in conditions of an energy crisis.

Prime Minister Rama announced a "big discovery" of the Shell company: Albanian oil will solve the energy problems of the whole of Europe!?

- Prime Minister Rama and Minister Baluku claim that huge reserves of oil and gas have been discovered in the Shiprag oil field in Albania, although this has not yet been confirmed by Shell, which has invested hundreds of millions of dollars and ten years in research.

Soccer, Champions League, Qualification, Round 1: The Croatians have already declared Skupi to be a sure rival of Dinamo

- Gotse Sedloski, one of Dynamo's legends, led Shkupi to a sure triumph over Lincoln (3-0) in the first qualifying match and is a big favorite before the second leg. The winner of this pair will be Dynamo's opponent in the second round. The Croatian media, in large part because of Sedloski, are interested in this double match.

Man can become a victim of their judgments:  When and why do sharks attack people?

– The shark misjudges that man is something it usually eats. Once the shark tastes it, it realizes that it is not its usual food and then lets it go.