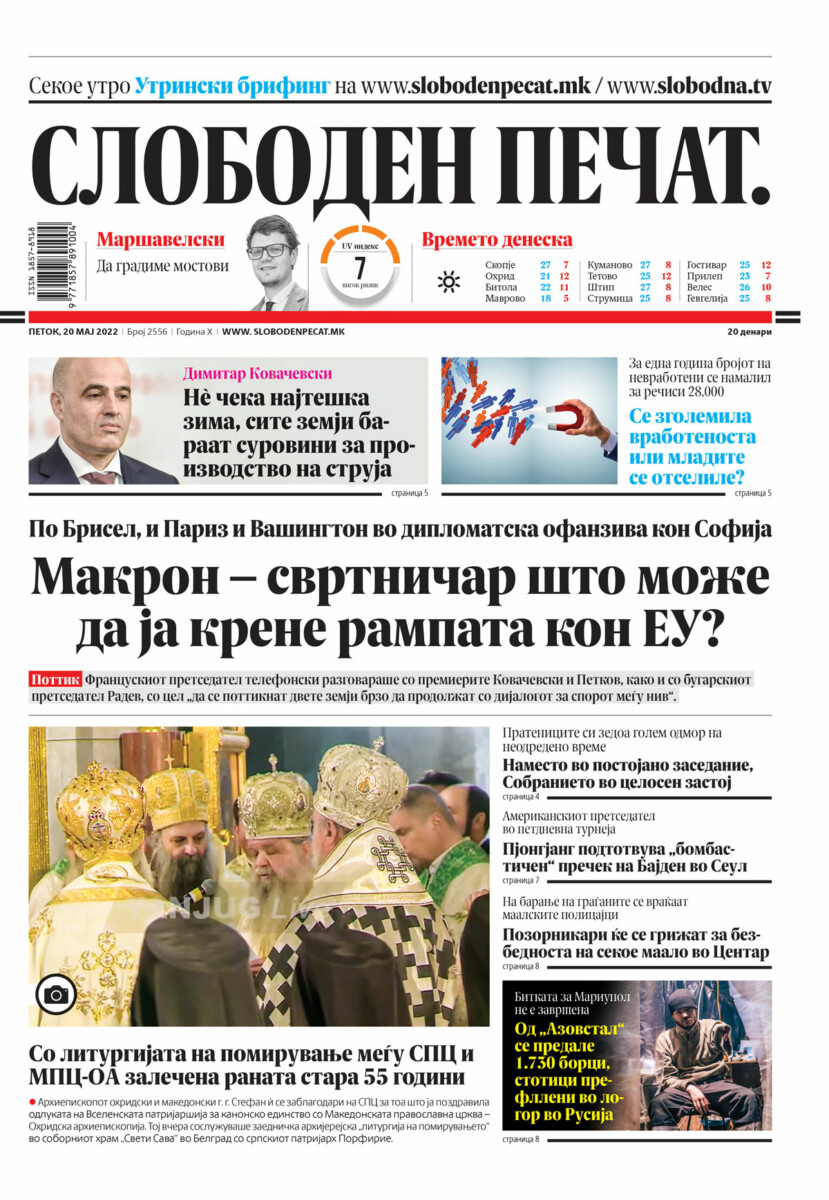 You will read in the print edition of "Free Press"

After Brussels, both Paris and Washington in a diplomatic offensive against Sofia:

Macron - a turning point that can raise the bar to the EU?

- The French president spoke by phone with Prime Ministers Kovachevski and Petkov, as well as with Bulgarian President Radev, in order to "encourage the two countries to quickly resume dialogue on the dispute between them."

- US Deputy Secretary of State Karen Donfried also met with Radev in Sofia, where they also talked about the progress in the European integration process in the Western Balkans as a strategic goal to support Europe's security and stability.

MPs took a long break indefinitely: Instead of a permanent session, the Assembly is in a complete standstill

Dozens of laws are stuck, and no session has been held either by any of the committees or any other parliamentary body, nor is a plenary session scheduled.

Reconciliation between SOC and MOC-OA: The 55-year-old wound was healed by the liturgy

Serbian Patriarch Porfirie said that after 55 years the deep and painful wound of the schism was healed, and the head of the MOC-OA Mr. г. Stefan thanks the SOC for welcoming the decision of the Ecumenical Patriarchate for canonical unity

Following the influx of bombings in Serbia, BiH, Montenegro and Croatia: Macedonia is safe as fake bombs shake the region

The country is not a direct target of hybrid threats for now, but this security issue must not be underestimated, is the conclusion of security experts on Macedonia's confrontation with hybrid threats.

In one year the number of unemployed has decreased by almost 28.000: Has employment increased or have young people moved out?

Many of the unemployed who registered with the Employment Agency due to economic measures related to unemployment, now voluntarily stopped registering as job seekers

Ukraine, бThe case of Mariupol is not over: 1.730 fighters surrender from Azovstal, hundreds transferred to concentration camp in Russia

More than 900 fighters evacuated from Azovstal have already been transferred to a "penal colony" on Russian-controlled Ukrainian territory in the town of Olenivka in the Donetsk region, the Russian Foreign Ministry said.

At the request of the citizens, the neighborhood police officers return: Police will take care of the safety of every neighborhood in Centar

The return of the neighborhood police officers is a big step in increasing the security, but also the cooperation between the citizens and the police, claims the mayor of Centar, Goran Gerasimovski.

Football Cup of Macedonia: Sileks after the battle for the fourth, and Macedonia GP for the second cup in the Cup

Interview with Dr. Vesna Poposka, Dean of the Faculty of Law: For a start, let's start using Cyrillic on mobile phones

Today's educators need to have enough compassion to understand the various aspirations, but enough courage to speak the truth, and enough defiance to look into the eyes of both future generations and present-day fellow citizens.