"Free Press": Macron announced that a compromise has been reached, Macedonia on the move 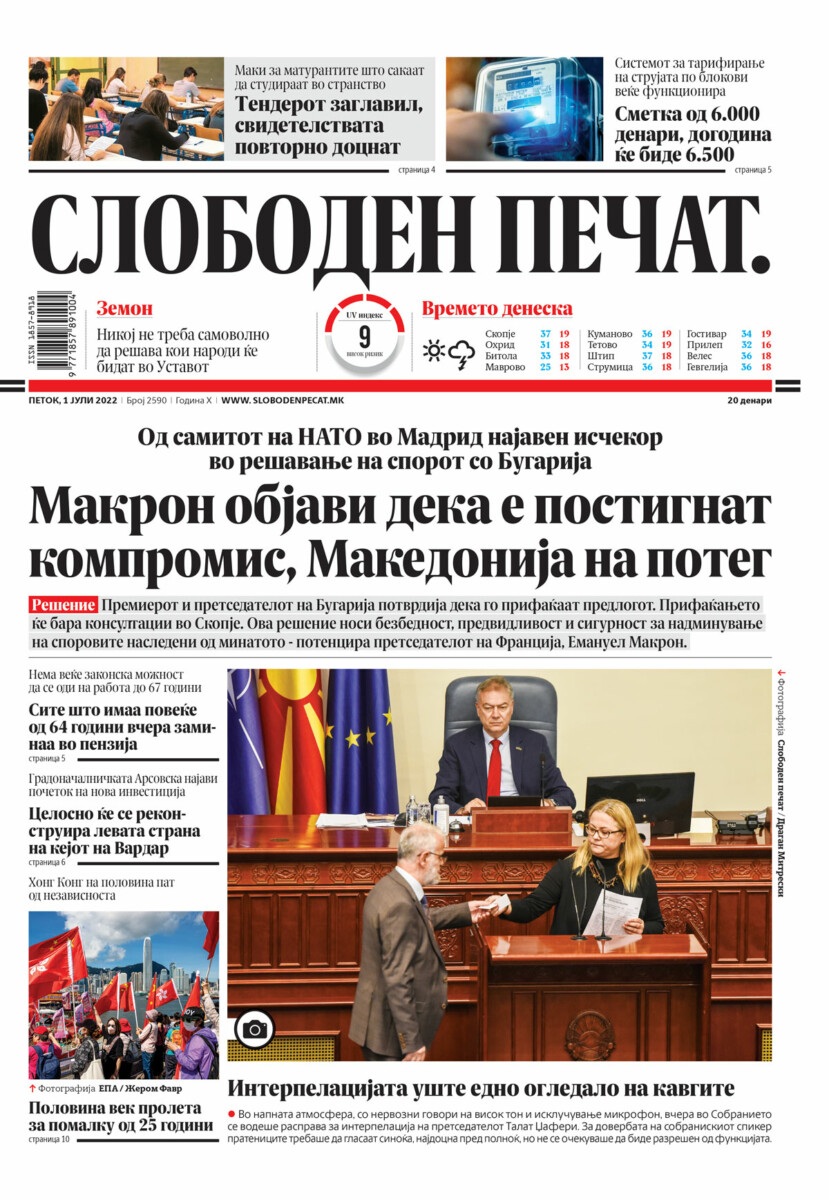 A step forward in resolving the dispute with Bulgaria has been announced since the NATO summit in Madrid: Macron announced that a compromise had been reached, Macedonia on the move

- The Prime Minister and the President of Bulgaria confirmed that they accept the proposal. Acceptance will require consultations in Skopje. "This solution brings security, predictability and certainty to overcome disputes inherited from the past," Macron said.

- The opposition accused Speaker Talat Xhaferi of violating the Rules of Procedure, of abusing the European flag of laws, that he abused tenders and partisanized the parliamentary services, but also that he was a woman hater.

Troubles for graduates who want to study abroad: The tender is stuck, the certificates are late again

- The certificates of the semi-graduates and graduates have already been handed over to the schools. The other students will receive them in August, before the beginning of the next school year. The reason for the delay is due to the delay in the procedure, says the director of the Bureau for Development of Education, Zekirija Hasipi.

There is no longer a legal possibility to go to work until the age of 67: Everyone over the age of 64 retired yesterday

- The submitted statements for extension of employment contracts after 64 years of age, which were submitted as of August 31, 2021, are valid until the expiration of the period for which they have been extended, and no later than June 30, 2022.

The mayor of Skopje Danela Arsovska announced an investment: The left side of the Vardar quay will be completely reconstructed

- This project envisages reconstruction of part of the quay of the river Vardar in a length of more than three kilometers, new bike path and new pedestrian path, formation of a new green area which provides more than 71.330 seedlings of seasonal flowers and 1.360 evergreen and deciduous seedlings low vegetation, as well as new hydrant network and urban equipment.

Basketball qualifiers for the 2023 World Cup: Spain will not play "loosely" against the red-yellows

- The Spaniards are huge favorites in the match with Macedonia in Zaragoza, and the play of the home team Fernandez announces that they will play with full steam, although they are already placed in the second phase. In our team they have the ambition to prove themselves worthy

New and strongest subvariant: A new wave of coronavirus is on the doorstep, the worst version of omicron ever

- The new wave of covid-19 seems to have started in New York, and is led by the new and strongest variant of omicron that has been observed to date, and this was revealed by their most famous epidemiologist.

Felton for Jane Sandanski: Sandanski, the leftists and the "wild socialists"

- The subtext of such "scientific histories" is quite clear: the bearers of Macedonian political separatism are supporters of the "greatest evil - Bolshevism", so their killing by Alexandrov, Mihajlov and their supporters is desirable and justified!

End of a culinary era: Rene Rexhepi closes "Noma", the best restaurant in the world

- This decision follows many years of thinking, says Rexhepi. He will lead his entire team on a journey around the world, to seek together the inspiration that will conquer the world in 2024.

Tomorrow is the regular episode for TV and movie

Elon Musk wrote on Twitter that he is buying Manchester United