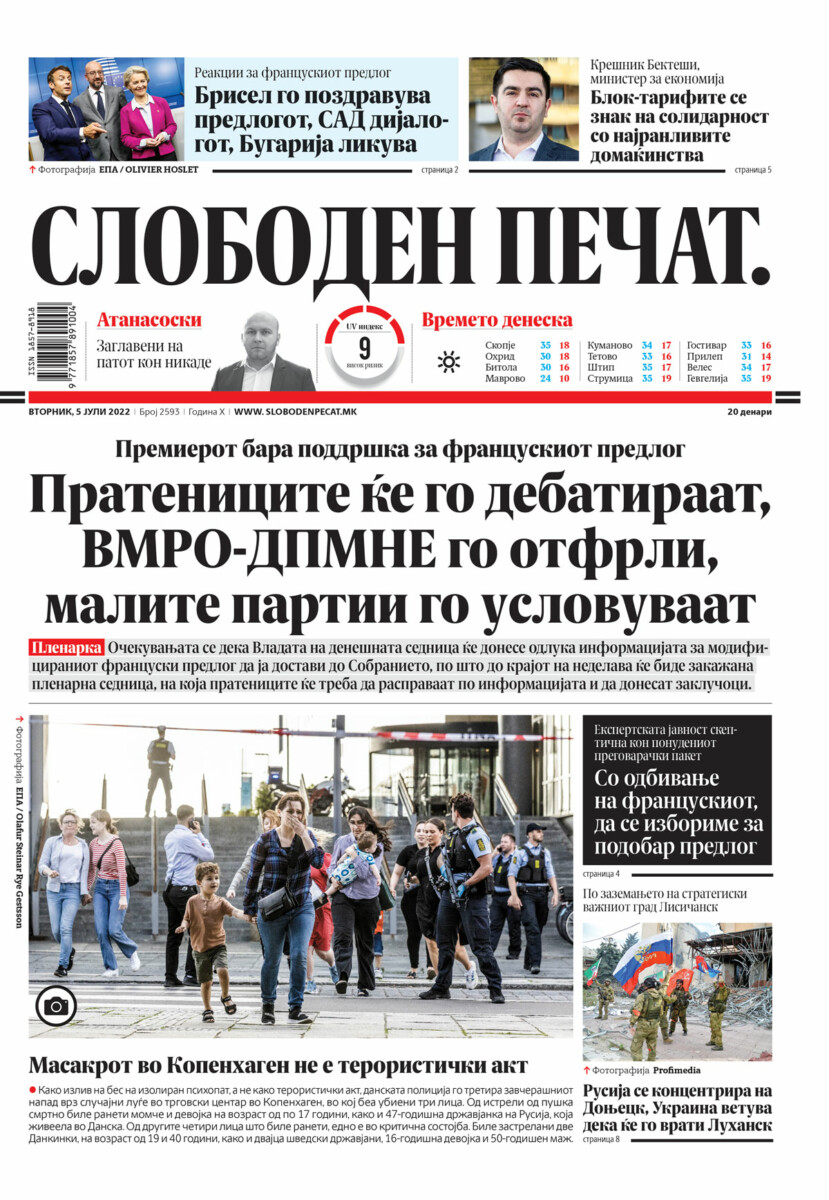 The Prime Minister requests support for the modified version: The French proposal in the Parliament was rejected by VMRO-DPMNE, the small ones party they condition it

It is expected that at today's session the Government will make a decision to submit the information on the modified French proposal to the Parliament, after which a plenary session will be scheduled by the end of the week, at which the MPs will have to discuss the information and reach conclusions.

The expert public is skeptical of the offered negotiation package: By rejecting the French, let's fight for a better proposal

– The protocol, which is not yet available to the public, remains part of the negotiating framework. Historical topics remain on the table, and the mixed expert commission for historical and educational issues receives much more pressure for results - argue the experts.

Reactions to the French proposal: Brussels welcomes the proposal, the United States the dialogue, Bulgaria rejoices

- The revised French proposal enables the start of negotiations with the EU - the European Commission believes. Thanks to the work of the French presidency, which completed its mission last week, we have made great progress on this issue, said a spokeswoman for the EC.

Kreshnik Bekteshi, Minister of Economy: Block tariffs are solidarity with the most vulnerable households

Initial investigation details from Denmark: The Copenhagen shopping mall massacre is not an act of terrorism

- A young Dane armed with a rifle mortally wounded a boy and a girl aged 17 each, as well as a 47-year-old citizen of Russia, who lived in Denmark

Mediterranean Games: Bronze for Georgievski, records for Ivanovski and Stojanovski

- Taekwondo player Dejan Georgievski won the bronze medal in Oran, Algeria, but did not perform in the semi-finals due to a stomach virus. Athlete Dario Ivanovski broke the Macedonian record in the 5.000 meters, and swimmer Andrej Stojanovski set a national record in the discipline of 50 meters, backstroke

Eclectic show of the American band in Skopje: Tivery Corporation took the audience into absolute euphoria

– Thousands of fans were delighted by the real sound and dance spectacle of the band's powerful multi-member line-up.

Meeting with Katerina Vasileska, chef of "food with name and surname": Tourism is not done with seasons, without curators and without authentic local food

- At the height of the corona crisis, Kate lost her job and in order to "make ends meet" month after month, she rolled up her sleeves and started cooking homemade Macedonian products, from ajvar to various sweets and zimniks. But not just any kind. These are authentic products from its climate, from which, he says, Argat's daily allowance of one thousand denars is extracted. But if you burn out, cut, labor gone…